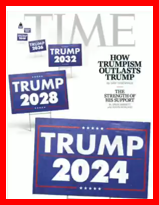 I’m proud of the long and thoughtful piece I wrote the other day. No thoughtfulness today. No fancy philosophical quotes or references to 18th-century French literature. Just a lot of angry contempt served up on a bed of obscenities. Because sometimes a fella’s gotta take a step back and give things some thoughtful reflection, as I did yesterday, and other times a fella’s gotta go off.

What’s got me all wound up is an article that’s a perfect example of the kind of lazy-ass Danish reporting on America that inspired me to start this blog. It’s from TV2 News, and it’s called “Uanset om Trump vinder eller ej, har han ændret amerikansk politik for altid.” It’s written by Esther Margrethe Lynard, who’s apparently the Ohio correspondent for TV2 News.

First: I’m not into character assassination. I’m sure Lynard is a lovely person, kind and thoughtful. I’m sure she’s smart and fun and terrifically cerebral. So when I say her article is lazy and stupid and thoughtless, I’m not calling her lazy or stupid or thoughtless. I’m calling this particular article all of those things.

It starts with the novel fucking proposition that whether or not he’s re-elected, Donald Trump is going to be a player in American politics for a good long time. But especially in 2024.

With an opening like that, you know we’re headed for some pretty wild observations!

But first the article wants to back up the radical claim that a president will have political clout even after he stops being president. After all, who’s gonna believe that kind of crazy shit without some serious supporting evidence?

So we’re told that several American commentators believe this to be the case because Trump’s former strategist Steve Bannon told an Australian newspaper that he thinks Trump will run again in 2024 if he loses in a couple of weeks. And that, quote, “Det her bliver ikke det sidste, I har set til Donald Trump.”

“Hm,” you can almost hear those commentators thinking, “you know, Bannon may have a point: win or lose, Trump’s probably going to be a political force for quite a while. He probably won’t just step back and disappear into the mists of history like Barack Obama did. Holy shit, I can get a column out of that!”

The article reminds us that Bannon’s facing trial for financial fraud and that he and the president have a complicated relationship. Which is true but makes things kind of awkward, if you take a moment to think about it, because it means this entire article is pegged on the reaction of “several American commentators” to an Australian newspaper’s interview of a guy who Trump fired and who’s been arrested and charged with fraud.

It’s like working up an article about submarining based on things people have written about something Peter Madsen said in an interview with a Swedish journalist.

Anyway, now that we’ve got the preliminaries out of the way and our appetites are totally whetted, the article is abruptly interrupted by a “Lyn-analyse” by the indefatigable and ubiquitous “USA analyst” Mirco Reimer-Elster, who states:

That’s actually a decent observation: Trump’s policies were so impactful that Joe Biden plagiarized them. (It’s kind of his thing.)

Donald Trump’s most recent job approval rate among Republicans stands at 94%. You’d never know it to read Danish media (which is mostly just an echo of partisan American media).

At exactly the same point in his own exalted presidency, Barack Obama had the support of only 89% of Democrats. I don’t remember anyone wondering whether Democrats were willing to cleanse the party of his stench.

So what he’s actually saying is “the only way to change Republicans’ image among Democrats is to empty the Republican party of the people Democrats despise”–which is pretty much all Republicans.

Good luck with that, perfesser.

In actual historical fact, by the way, it was the Democrats that fought a war to preserve slavery, it was Democrats that invented and imposed the Jim Crow laws (which were so sublimely horrible that they were adopted by Nazi Germany), it was Democrats that had to be dragged kicking and screaming into supporting the Civil Rights Act, it’s the Democrats who had a former Klansman in the Senate until 2010 (and many others before him), and it’s the current Democratic candidate for president who thinks blacks all think alike and aren’t really black unless they vote for him. You know, the old white guy who thinks that poor kids can be just as awesome as white kids.

Donald Trump is attracting more black and Latino voters even as he’s losing support among some groups of white voters. Is it that magic power of Republican racism attracting them?

But wait, the article’s not over yet, let’s have another fucking leftist professor help us understand what’s going on with American conservatives.

Trump won the 2016 Republican primaries because conservatives were sick to fucking death of the Republican establishment. The famous “Never Trumpers” are exactly the kind of people that the Republican rank and file sent packing. Calling them “elites” or “the establishment” is stupid and inaccurate. It was their fucking incompetence that caused Trump. What they are now, with respect to nine out of ten Republican voters, is what they always have been: useless.

“Xenophobia, hostility to immigration, anger toward minorities, and general hate toward everything liberal.”

Do you ever see TV2 News, or any other Danish news medium, providing insights into the Democratic party by quoting from activist Republicans who write for Breitbart, or Instapundit, or AceOfSpades? Because that would be the exact equivalent of using these Democratic partisans from the Washington Post and the New York Times to help Danes “understand” Trump’s relationship with the Republican party.

“Say, I’d like to understand more about the nature of Joe Biden’s relationship with the Democratic electorate: let’s have Rush Limbaugh walk us through it.” — said no Danish editor, ever.

But wait! The article’s suddenly been interrupted by another insight from USA Analyst Mirco Reimer-Elster:

Oh, for fuck’s sake. Really? “There are doubtless many in the Republican Party who’d like to borrow the neuralyszer from the ‘Men in Black’ movies and erase voters’ memories of the time with Trump.”

94% approval among Republicans. With no decimal between the 9 and the 4. So the “many” that are just aching for the sweet, sweet release of a zap from the fucking neuralyzer are fewer than 6%.

Republicans don’t hate Donald Trump. They don’t think he carries a stench that needs to be purged from the party. And they’re not xenophobes or racists or “haters of all things liberal.” (In fact, Republicans are now the party that supports classical liberalism: it’s the progressives who’ve become illiberal. We can take that up another day, when I’m in a more reflective mood.)

The article then tells us that Biden is leading Trump in the polls but that anything could still happen and the election is on November 3.

The only Republican quoted in the whole article is Steve Bannon, and all he says is, “Say, I reckon Trump’s gonna be a major political player for a while yet, even if he loses.”

Everything else is coming from those precious partisan professors whose attitude toward Republicans runs the gamut from total disgust to super total deluxe disgust. Just the kind of people you know you can count on for solid and reliable analysis of conservative politics.

Day by day, article by article, the Danish media are making Denmark stupider and stupider about America.