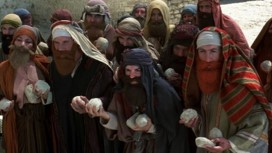 We have a saying in English that people who live in glass houses shouldn’t throw stones. It’s related to the old injunction to get the log out of your own eye before you point out the mote of dust in your neighbor’s.

A Sunday article by the rabidly anti-Trump, anti-Republican Steffen Kretz, our taxpayer-funded USA correspondent for DR, brings these expressions to mind:

Bear in mind, friendly reader, that this is not an editorial or opinion column. This is DR’s chief USA Correspondent trying to keep Danes informed of events in America.

Were it an opinion piece, I’d have no problem with it. I’d say, “Well, there you go, another rabidly partisan hit job. Par for the course.”

But like I said, it’s not presented as an opinion piece. It’s presented as journalism. And it’s this kind of “journalism” that explains why fewer Danes disapprove of Vladimir Putin than of Donald Trump. Thanks to this kind of one-sided and parochial reporting, Danes actually know less about American politics than do the citizens of just about any country in Europe—not because they get less coverage, but because so many of the “facts” they’re informed of are actually opinions. Not just opinion, but frequently unhinged opinion.

(Yeah, I’ve got the numbers to back that up, and I talked about them in a previous post, but I don’t feel like scrounging around for them right now.)

It’s a fairly lengthy article, as these things go, but I can summarize it for you pretty succinctly: Donald Trump is fundraising off his assertion that he was cheated out of a win in this election and has thereby raised a huge amount of money and that’s bad because he may do things with that money that Steffen Kretz doesn’t approve of. Also it’s sad and terrible that so many Americans are falling for this big charade, which just proves how stupid they are—not smart, like Steffen Kretz.

It is, as usual, an article full of factual errors, including the bogus media talking point that the election is over and Biden won and Trump lost and that’s that. (I’ll toss in my disclaimer one more time: Biden probably won, but it’s not over yet. If you believe in standards and norms and rule of law, then kindly wait for the legal challenges to make their way through the system and for the final certification to take place when the Electoral College votes are tallied. Otherwise you are being exactly as stupid, evil, or insane as you believe Trump to be.)

It is, also as usual, full of insinuations that Republicans and their supporters are doing despicable things unprecedented in the history of the republic.

Normally a losing presidential candidate starts packing up their campaign as soon as it’s clear that they’ve lost—and it’s been clear for a while that Trump has lost. No donor with his full five senses will normally give money to a candidate who’s already lost an election.

Is Steffen Kretz misinformed, stupid, or malicious? Logically he must be at least one of those things, and may quite possibly be all three.

First: losing presidential candidates don’t start packing up their campaigns once it’s clear they’ve lost. Hillary Clinton, for example, managed to kick-start what amounted to a shadow coup attempt by launching the Russian Collusion hoax the day after the 2016 election, and has spent much of the past four years attacking Donald Trump on every possible occasion. It was, you may recall, she herself that said this fall that “Under no circumstances should Joe Biden concede the election.”

Second: yet again, for what really ought to be the last time, it has not been “clear for a while” that Trump has lost. It is not clear right now. His attempts to find and prove fraud are not novel, unique, or illegal (although personally I believe they’ll prove fruitless). The election has not yet been settled. Of course it’s okay to say Trump has presumably lost, or appears quite clearly to have lost, or has in all likelihood lost. It is wrong to say he has lost.

Third: donors have and probably always will continue donating to candidates who have lost an election. Obama’s PAC Organizing for Action, for example, was repurposed after the 2016 election to fight the Trump agenda and preserve Obama’s own legacy (after having been repurposed after the 2012 election to preserve his legacy and pave the way for a Democratic successor). Do OFA donors lack their full five senses?

The result of Trump’s current campaign is that a significant portion of the American electorate now believes that there actually was some fraud in the November third election and that it robbed Trump of victory.

There was some fraud in the November 3rd election. That much has been documented. It’s not even surprising, given that there’s been documented fraud in every American election. The question is whether there was enough of it, in enough places, to have made an actual difference in the outcome. Reasonable people can and do disagree on that. But only unreasonable people are so stupidly cock-sure of themselves that they’re willing to state as fact what can only at this point be supposition.

I could go on, but what’s the point? It’s just more of the same.

Festooning the article are photos of the fundraising mails the Trump campaign has sent out. The captions accompanying them are priceless:

The Trump campaign wants to fight against Biden and the far left. The campaign says the media are cooperating with Biden. And it’s telling people that their donations to a Republican president are important for America’s future.

How crazy is that? Can you believe it? Have you recovered from your shock yet?

One has to assume that Steffen Kretz has either never seen a Democratic fundraising letter or is simply incapable of understanding the basics of political fundraising in America. Or both.

Or, of course, one could simply assume he’s an idiot. Or that he’s simply another partisan hack.

But whatever ails him, I’ll give him this: Steffen Kretz Has Success Selling Lies about American Politics.

And my money is funding it, whether I like it or not.