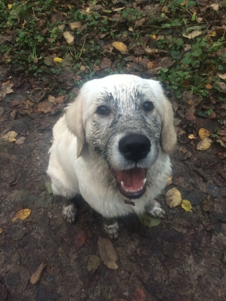 NOTE: Although this opens with some anecdotes from my life in Denmark, it has nothing to do with Denmark. That’s going to happen sometimes. My blog, my rules.

By the time we got our golden retriever (whom I’ll refer to as Dog to avoid running afoul of GDPR), our daughters were aged 9 and 5. Herself and I were by then experienced parents, veterans of civilization’s perpetual war against the barbarity of children. Both of us had grown up with dogs but neither of us had ever trained a dog from puppyhood to maturity.

We signed up for a dog training course, bought a bunch of books, and committed ourselves to making our puppy the best trained golden retriever in the history of the world. And when I say we, I mostly mean she. It was Herself that did most of the heavy lifting; she read the books and did the training and passed the information along to me. I merely did as I was told.

An older neighbor who’d raised several dogs thought our 5-year-old was a little young for a golden retriever. He said dogs are intrinsically pack-oriented and think hierarchically. It would be important, he said, to make it clear to Dog that she was lowest ranking member of the household. He suggested we do this by preparing her meals in front of her, then having each member of the family pretend to eat a bit of it before setting the bowl in front of Dog and giving her a command to eat (we chose “værsgo,” which means something like “there you go“). The thinking behind this, he told us, was that Dog would learn her bottom place in the hierarchy and would never get aggressive with our youngest in an effort to advance her own rank. As silly as it seemed to us, we followed his advice (couldn’t hurt, might be valuable): our pup very quickly learned not to touch her food until each of us had “sampled” some and the magic word had been uttered. Soon we could set her food bowl down without the whole charade and she still wouldn’t touch it until she heard “Værsgo!“

We spent a weekend away from home at one point when Dog was about a year old. My mother-in-law had agreed to take care of Dog, who was by now a fifty-pound bundle of overgrown puppyhood, in our absence. Mother-in-law telephoned Herself the very first night of our absence: Something is wrong with Dog. I don’t know if she’s sick or what. I put out her food an hour ago but she still hasn’t touched it. She just sits there by the bowl, staring at me.

“Did you say Værsgo?” Herself asked.

“Say it,” Herself told her mother.

Dog is 6½ years old now: you can throw raw red meat in her food bowl and she still won’t touch it until you say værsgo. It’ll rot before she eats it without permission. (She’s also never tried to advance her place in the pecking order by taking Younger down a peg; whether the two phenomena are related is anyone’s guess.)

The trainer with whom Herself and Dog “studied” had a philosophy of positive reinforcement. Punishing dogs teaches them to associate certain things with pain, she explained, which can achieve the results you want, but can also create a neurotic and confused dog. The best way to train a happy, healthy dog is with positive reinforcement. Ignore them when they behave badly, but reward them immediately when they exhibit desired behaviors.

An example: dogs are, as we all know, excitable creatures. The trainer told us about her own mother’s dog problem. We’ll call the mother Dorthe and the dog Daisy. Whenever Dorthe came home, Daisy would begin yipping and prancing and jumping around with wild excitement and enthusiasm, scrambling around and between Dorthe’s feet. Dorthe would wave her arms at Daisy to try and settle her down, and would move around as deftly as possible to avoid kicking or tripping the excitable dog. She would tell Daisy, in urgent tones, to stop it!, and be quiet!, and be a good girl!, and whatever else.

“What she was really doing,” the trainer explained, “was teaching the dog: if you jump around and bark at my feet, I will give you all of my attention and make funny playful movements and talk to you. That’s just what a dog wants, to play! Whee, what fun, the lady is waving her arms around and talking to me, she wants to play!”

So that’s what we went with: we reinforced all good behaviors immediately, and were careful not to send accidental reinforcement of behaviors we didn’t like. It worked pretty well. She’s a good girl.

Somewhere along the way, we fused our dog training lessons with our parenting philosophy. That’s not to say we never punished our daughters for bad behavior: we did. (Nor is it to say we tossed them snacks whenever they cleaned their rooms: we didn’t.) But we became aware of how we were sometimes “programming” them even when we weren’t actively trying to by inadvertently rewarding “bad” behaviors with words or actions they might construe as positive. We weren’t obsessive about it: we simply sometimes noticed ourselves doing it, and stopped.

They seem to be turning out all right as well. So far. I mean, we’ll see. (Excuse me a moment while I knock wood maniacally.)

I think of old Dorthe, frantically jitter-bugging around her foyer and talking to Daisy to try and calm her down.

From the CBS News article:

“College should be a ladder up,” Schumer said. “For too many people, debt is the anchor that weighs them down, and they rarely overcome it.”

Warren estimated the initiative would cost about $650 billion, but she said the measure would “boost our economy right now.”

“The idea behind this is to put more money into the pockets and better long term prospects for young people who are starting their economic lives,” Warren said. “In the long run, canceling this student loan debt will be a big positive, not only for those families, but also for our economy.”

Debt is an anchor that is rarely overcome. We therefore propose spending 650 billion dollars we don’t have.

A major campaign issue for Democrats during the 2020 presidential campaign, student loan debt has been a looming financial issue since before the pandemic and widespread coronavirus-related job losses and pay cuts, especially among millennials, have only exacerbated the issue. Last year, federal student loan debt reached an all-time high, nearing $1.6 trillion among more than 40 million Americans, according to the Federal Reserve Bank of New York. On average, student loan borrowers owe between $200 and $299 every month, an amount that for many is untenable; about one in every five borrowers is in default, according to the Department of Education.

And let’s take one more quote from the press conference:

During Thursday’s press conference, Omar suggested $50,000 may be the first step towards total student loan cancellation, who said, “we cannot be too bold in responding to the pandemic and providing needed help to the American people.”

“I have been encouraged by the steps President Biden has taken to tackle the student debt crisis and hope he uses executive authority to move towards full student debt cancellation,” Omar said.

I understand the laudable goal of relieving financially stressed Americans from the burdens imposed on them by the crisis of government lockdowns. (The health crisis is biological. The financial crisis is governmental.)

The Trump administration put a moratorium on student debt interest and payments last year, and that seemed sensible enough to me. It’s a (relatively) cheap way to provide a lot of relief in the very difficult here and now.

But why cancel the debt? Grown men and women sought out loans: they applied for them, considered them, and signed for them. They borrowed money, they spent it, and they need to pay it back.

Senator Warren says the goal is “to put more money into the pockets and better long term prospects for young people who are starting their economic lives.” The current freeze has already accomplished that: it gives those young people some time to weather this crisis and get their economic legs under them before payments will have to resume (currently scheduled for October 1, but that could be extended if necessary).

The freeze costs something in the form of lost interest and deferred federal revenue, but nothing like the two thirds of a trillion dollars Warren says the proposal would cost.

What’s more, it has the salutary effect of not teaching Americans that debt is something you can shrug off if you’ve bit off more than you can chew, or if you simply don’t feel like paying off your obligations because, you know, it’s such a hassle.

Clearly Senators Schumer and Warren, Representative Omar, and their like-minded colleagues do not.

Or they do, but don’t care, which is worse. (And also more likely.)

But it’s also irrelevant, because they say they want to help everyone, and as long as they say the nice words, the consequences of their actions are irrelevant.

“The student debt crisis has always been a racial and economic justice issue, but for too long, the narrative has excluded Black and Latinx communities, and the ways in which this debt has exacerbated deeply entrenched racial and economic inequities in our nation” said Pressley, a member of the House Financial Services Committee.

(I’m surprised Representative Pressley hasn’t yet been removed from office for incitement, since that’s all the rage these days: in August of 2020 she said: “There needs to be unrest in the streets for as long as there is unrest in our lives.”)

It’s a clever ploy: now you can’t argue against debt cancellation, because your belief that requiring adults to honor contracts they entered into voluntarily into is racist. And imagine having the kind of brain that thinks it’s any kind of “justice” to force people who didn’t sign a contract to cover the bill for the people who did.

Again: we can help a lot of Americans through this crisis by extending the interest and payment freezes. That solves the short term problem (“responding to the pandemic and providing needed help to the American people”) without adding a long term problem of 650 billion dollars in additional federal debt.

But if you wave the magic wand of debt “cancellation” at the problem, you’re communicating the following messages:

Those are terrible messages, and four of them aren’t even true:

One of the five messages I bulleted is, alas, true: taxpayers do have to pay for the fiscal irresponsibility of their fellow citizens—especially those they elect to represent them in Washington.