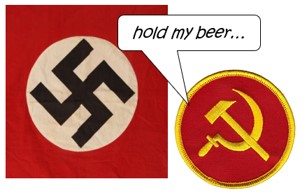 There’s a lot going on in the world these days.  The Danish media are bubbling over with stories about the upcoming election, the continuing mink scandal, and reactions to the COP26 summit.  The prime minister has called a press conference for this very evening to discuss “the corona situation,” and her remarks will surely dominate the next news cycle whatever she says.

At the same time, the establishment media on both sides of the Atlantic are working furiously to avoid reporting a story that suggests, by their own definitions, there’s now ample evidence to make the case that Hillary Clinton led an attempted coup against a duly elected president.

(Am I saying Clinton did in fact attempt a coup?  No.  Nor am I saying she didn’t.  What I am saying is that if the media applied the same sloppy standards that were used to justify their accusations against Donald Trump, then they would surely now be shrieking hysterically that the Danchenko indictment points to an attempt by Clinton partisans, and perhaps Clinton herself, to overthrow an elected president on false pretenses. In other words, to attempt a coup. And they’d be telling us breathlessly even now that, as a consequence of the Danchenko indictment and arrest, “the walls are closing in…”)

Instead of getting into any of that, however, I’d like to burn a few paragraphs scratching a perennial itch.

The source of my irritation is a Sunday article from DR:

Here’s how it opens:

The swastika is possibly the most controversial symbol in the world.

However, it was a lack of swastikas that started a number of debates back in 2017, when the gaming company Activision released “Call of Duty WW2.”

The action in the single-player version takes place at the end of World War II and included several visible swastikas.

However, the same was not the case in the extensive multiplayer version, where the gaming company chose to replace them with large dark iron crosses.

They did so because of “cultural differences that we have to respect,” explained Michael Condrey, co-founder of game developers Sledgehammer Games, which developed the war game for Activision.

“We want to be authentic in our approach to game design, but it’s a delicate balance. We don’t want to glorify the Nazi symbols, but neither do we want to ignore the dark period in our past,” he explained at the time.

One of the main reasons for the decision was that, at the time, countries like Germany had banned Nazi signs and symbols in video games. It was therefore difficult to play together online because the content of the game would have to vary across national borders.

The story goes on from there, but that’s enough. The necessary points have been made.

If people want to goosestep around in 2021 rocking swastikas like it’s 1939, why stop them? They’re outing themselves as horrors, as grotesques. They’re doing the rest of us a favor: it’s the human equivalent of a content warning or a trigger alert: “Warning: this human being is either hideously evil or unfathomably stupid. Contact should be avoided.”

Which brings us straight to the source of my irritation:

That screenshot shows just the first eight of the 418 items Amazon.co.uk returned on my search for “hammer and sickle clothing.”

(I didn’t need Amazon, though: just type “hammer and sickle clothing” into your favorite search and engine and behold the glorious cornucopia of stylish choices.)

There are 59 items returned on a search for “swastika clothing.” Only three of them include actual swastikas in their design: two of them are obviously anti-Nazi (the swastika is crossed out with a red line), and the last is a necklace pendant that appears to be an actual swastika. Here’s its full product description: “S925 sterling silver necklace female niche design sense Japanese and Korean version of personality creative geometric swastika Gothic letter style clavicle chain.”

I’ll assume most of you are historically literate enough to grasp this, but for the kids in the back row—and to save myself some effort—there’s a breezy little summary of the Nazi and Commie body counts out on Medium:

“When you count them all,” author Aravind Balakrishnan writes of the Nazi death toll, “the final number crosses a staggering 18 million! Is it any wonder Nazism is considered as one of the darkest episodes of the twentieth century?”

Then he goes through the numbers for communist regimes and movements, which add up to roughly a hundred million.

“Incredible, isn’t it?” he writes. “Shouldn’t Communism be hailed as a more dangerous movement? At least by the sheer number of deaths it caused?”

There’s nothing tricky or sophistic about this. These aren’t hard to find numbers. They’re widely available—and since most of them took place in the previous century, they’ve been around for a while.

Everywhere it’s been tried, Communism has been a horror. The hammer and sickle have caused more human misery than any other symbol, including the swastika. This has been amply chronicled.

I’m not saying we should ban the symbol: only that I’ve never heard an intelligent or even rational argument for banning the swastika that wouldn’t apply even moreso to the hammer and sickle.

The irony of the hammer and sickle’s commercialization isn’t lost on me, but does anyone ever read The Gulag Archipelago anymore?

Or was that canceled because Solzhenitsyn was a white European male?

In any case, as I’ve already said, we ought to be grateful when people voluntarily attire themselves in that symbol of murder, repression, enslavement, and tyranny. It lets us know what we’re dealing with: ignorance or evil—or both.