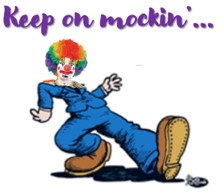 Joe Biden on Twitter in February 2020, responding to Donald Trump’s travel restrictions on China: “We are in the midst of a crisis with the coronavirus. We need to lead the way with science — not Donald Trump’s record of hysteria, xenophobia, and fear-mongering. He is the worst possible person to lead our country through a global health emergency.” (See the tweet here.)

On Friday, the Biden administration banned travel to America from South Africa, Botswana, Zimbabwe, Namibia, Lesotho, Eswatini, Mozambique and Malawi. (Read all about it here.) Biden himself told reporters, with his usual “c’mon man” indifference to accuracy, that this ban on travel from eight African nations was a ban on travel “to and from South Africa and six other countries in that region.”

For you punks in the back row, that region is southern Africa, and all eight countries have majority black populations.

I look forward to the establishment media piling on the already beleagured president for this hysteria, xenophobia, fear-mongering, and straight-up anti-black racism. (And his inability to count, or to distinguish between “to and from” and “from.”)

I haven’t seen any such criticism yet, but I’m sure it’s right around the corner.

Journalists are probably just taking the time necessary to double- and triple-check their facts: no real journalist wants to criticize a president unfairly.

(And I am Marie of Romania.)

More seriously, Biden’s travel bans are just one more example of the ways in which we’re being lied to, misled, and gaslit by the entire cultural apparatus.

In case you don’t read the always bustling comments section of this blog, a few days ago Søren posted this screenshot of a deleted tweet sent out by Danish “America expert” David Trads:

“It’s really wild that a jury acquits Kyle Rittenhouse from the murder of two black men. Then 17-year-old Kyle was (illegally) armed, when he went into the demo(nstration) with primarily blacks who were protesting police violence. Outlook for violent unrest now.” (The bold white text at the bottom says “This tweet has been deleted.”)

Racialization of an event with no racial dimension: check.

It’s really wild that a guy that goes around Denmark giving lectures about America, a guy who’s the author of a book about the country (America, where are you?), a guy who routinely pops up on Danish television to explain America, a guy who is planning a lecture tour in America next summer, couldn’t be bothered to follow a case closely enough to know the simplest and most salient facts pertaining to it.

It’s his bread and butter and it’s a pretty easy gig: all he has to do is keep up with the American news enough to twist it into conformity with his insane worldview and then shoot his mouth off. And he can’t even do that.

Kyle Rittenhouse wasn’t accused of murdering any black men. He wasn’t illegally armed. And the “protest of police violence” had, by the time Rittenhouse arrived on the scene, devolved into violence, looting, and arson.

The best you can say for Trads’s tweet is that it didn’t include the usual bit about Rittenhouse having crossed state lines (as, for example, 37% of New York City’s 11 million workers do every single work day).

I have nothing but Anglo Saxon words of contempt for such fair-mindedness at this point.

Joe Biden ran for president on a lie: the “good people on both sides” blood libel. (Maybe it should be called the “whack-a-mole” libel, since no matter how many times it gets debunked it pops right back up again somewhere else.)

Joe Biden routinely accused Donald Trump of racism based on zero actual evidence. (Got the evidence? I’m all ears.) He accused Trump supporters and Republicans of racism. He stated that if black Americans voted for Trump, they weren’t really black. Back in the day, he warned black Americans that Republicans wanted to put “y’all back in chains.” He has been nothing but racially divisive throughout his career, always for his own political gain.

So I don’t want to hear one goddam word in defense of his south Africa travel bans not being racist by anyone who will not publicly and unambiguously acknowledge that Donald Trump’s travel bans in the spring of 2020 were not racist, and that Biden’s accusations that they were were just intentionally divisive political propaganda.

Joe Biden is a racist, xenophobic, fear-mongering hysteric unfit to lead the nation. Period. Unless Donald Trump was not, in which case let’s hear that loud and clear—from Joe Biden, Hillary Clinton, Nancy Pelosi, and Chuck Schumer. Until then… let’s go, Brandon!

As for David Trads, listen: if he were just some excitable Danish kid sounding off on Twitter to fit in with the cool kids then I wouldn’t have batted an eye at his having gotten so much wrong in so few words.

As I’ve already noted, though, this is a guy who’s been marketing himself as an expert on America, as someone Danes can trust to inform them about that big crazy nation over the Atlantic. Before Trads deleted his tweet, he wrote it. “The murder of two black men” isn’t a typo, it’s a factual error that anyone who’d given the trial even a moment’s attention would have known to be false. You can’t accidentally write “Queen Margrethe is a Reptilian.” It’s not something that you can blame on auto-correct. It’s a falsehood, and the only way you write it is if you believe it (or want your readers to believe it). Deleting it as soon as the “error” is brought to your attention is appropriate, but you’ve already sent the signal that you were entirely misinformed on the subject.

Why on earth should we trust your immediate reappraisal?

Who would keep listening to such a pompous ass?

Same thing with the innocuously parenthesized “(illegally)” modifying the adjective “armed.” Anyone following the trial knew that the weapons charge had been thrown out because Rittenhouse was legally entitled to carry his weapon.

In other words, this “American expert” went straight to Twitter with an opinion that was based on total ignorance of the case. He had no idea what was going on, but was right there ready to sound off based on whatever he was seeing in his Twitter feed.

Not only that, but after deleting that stupid tweet he cranked out a corrected version (without even acknowledging that he’d had it entirely wrong the first time around).

In English: he changed “two black men” to “two men” and changed “(illegally) armed” to “armed as a vigilante.”

If it mattered that the men were black in the original post, why doesn’t it matter that they were white in his correction? And how can a man that a jury found to have been acting lawfully in self-defense be a vigilante?

Unless I’m mistranslating selvtægtsmand: Google Translate seems to think so, because it turns that passage into something very different:

Also, in his very next tweet, Trads made the following observation: “Probably the two worst things about the acquittal of Kyle Rittenhouse: 1) It legitimizes that a vigilante can carry a weapon into a demonstration and kill two men. 2) It’s almost impossible to imagine a young black man getting released unpunished.”

Only David Trads can answer for the racism of his own imagination (what’s impossible for him to imagine but has in fact occurred in reality is entirely on him), but his insistence on calling Rittenhouse a vigilante even after the acquittal strikes me as objectively stupid, if not potentially actionable—even as it gets the whole thing wrong. Saying the acquittal legitimizes going into a demonstration and killing two people is a pretty reckless way of interpreting defending oneself from life-threatening attacks.

So even Trads’s corrections are off the rails.

TRADS: OMG, THE EARTH IS AS FLAT AS A PANCAKE!

TRADS: THE EARTH IS ROUNDISH! Now let me share with you my other important thoughts on the subject…

From someone positioned as an expert on America (if you’re quick you can still sign up for his lecture tour of Texas next summer), one ought to expect a little more than simple knee-jerk bloviation on Twitter.

Where does it all leave us?

Joe Biden’s either a xenophobic, fear-mongering hysteric or a grotesque liar, and David Trads is marketing himself as an expert on a subject about which he’s completely ignorant, even when his ignorance is pointed out to him.

But no one in any position of influence in American or Denmark is going to say so, because Joe Biden is just too awesome and uniteful, and because David Trads says all the awful things about America that Danes are just dying to hear.

The best the rest of us can do is keep on mockin’.