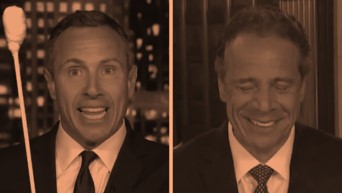 CNN confirmed the firing and said that Cuomo had been “terminated … effective immediately” as an outside law firm continues to investigate “his involvement with his brother’s defense.”

The station was notified by an attorney representing an accuser of a sexual misconduct allegation against Chris Cuomo not related to his role in his brother’s scandal, The New York Times reported.

It wasn’t clear if CNN’s decision to can Chris Cuomo had anything to do with the allegation made against him. CNN had said prior to the report on the allegation late Saturday that its probe uncovered new information, though it didn’t specify the nature of that data.

“While in the process of that review, additional information has come to light,” the network said. “Despite the termination, we will investigate as appropriate.”

What we’ve got here is a situation with echoes of the Berlingske kerfuffle Søren addressed so thoroughly last week: a major media outlet has acknowledged some wrongdoing within its ranks without fully addressing the implications of that wrongdoing.

CNN.com allowed Brian Stelter, one of their own on-air personalities (I use the term loosely), to write up the story (“CNN Fires Chris Cuomo,” Brian Stelter, CNN.com, Dec. 5). Stelter lays out the facts of the case in simple declarative sentences, then writes:

In a statement of his own Saturday, Chris Cuomo said, “This is not how I want my time at CNN to end but I have already told you why and how I helped my brother. So let me now say as disappointing as this is, I could not be more proud of the team at Cuomo Prime Time and the work we did as CNN’s #1 show in the most competitive time slot. I owe them all and will miss that group of special people who did really important work.”

Cuomo did indeed tell us why and how he helped his brother: the problem is, it turns out that what he told us wasn’t true. Which is the gentleman’s way of saying he lied to us. (Although the use of gentlemanly language about a man who thought it was okay to grope the ass of a married woman in front of her husband is probably unwarranted.)

Not only that, but even his boast of being “CNN’s #1 show in the most competitive time slot” is itself misleading: it was indeed CNN’s top ranked show in prime time (20:00-23:00 weekdays). However, that “#1 show” only averaged something like a third to a half of the ratings generated by Tucker Carlson and Sean Hannity over at Fox News Channel in the same time slot. The show was, like Cuomo himself, a loser among its peers (although it did sometimes outperform MSNBC).

But let’s not fall down into the rabbit-hole of parsing the particular lies and misrepresentations of Chris Cuomo. Such a task is beyond the resources of this humble little blog.

Instead, let’s step back and ask ourselves two questions.

First: does the revelation that Chris Cuomo was lying and spinning to his own employers while defending his now disgraced brother’s crimes not suggest he may have been willing to lie and spin to his viewers about other things?

Second: what larger lessons about American society can we deduce or infer from the Sadly Predictable Tragedy of the Cuomo Brothers? And when I say “American society,” I mean the layer or stratum of society often referred to as “the elites,” “the anointed,” “the ruling class,” or “the establishment.”

(I’ll stick with “the establishment” because it’s the most neutral of the terms.)

The first question almost answers itself: of course a man willing to lie to his employers would be willing to lie to his viewers: what’s more, we know he lied to his viewers because his lies were frequently documented. (Best and easiest example: staging his exit from covid quarantine as if he’d been in isolation the whole time, despite the fact of his having been witnessed publicly picnicking with his family.)

We know a tree by its fruits, so what we’ve got here is clearly a Lying Tree.

How often did he lie to his viewers, and about what? Having finally been forced to acknowledge that their Prime Time star was indeed a speaker of untruths, is CNN not now compelled in the interests of integrity to conduct a review of his work and inform their viewers of areas in which he may have misinformed them?

After all (speaking of fruits), he may have been out there calling apples bananas.

It’s an interesting ethical question, but as I already mentioned it ties directly back to the questions raised about Berlingske’s coverage of the Russian Collusion hoax that Søren wrote about last week.

So let’s focus on the second question: are there any larger lessons to be learned from the Cuomo Follies?

Let’s start by refreshing ourselves on the heroism of New York Governor Andrew Cuomo back in 2020.

A Norman Vanamee piece in Town and Country in April of that year (“Will Andrew Cuomo Ever Run for President?“) is representative of the genre. Try not to cringe too much as you read the following excerpt:

Andrew Cuomo, New York State’s taciturn and iron-fisted governor, has sprung onto the national stage recently as a source of comfort and inspiration during the coronavirus pandemic. This unlikely transformation has been chronicled by the media and a newly adoring public, which now looks forward to certain trademark moments in the governor’s routine.

There’s the Andrew Cuomo Daily News Briefing—blunt, businesslike, full of terrible numbers tempered by genuine moments of hope and compassion. It’s nice to hear a leader tell the truth—and urge us to embrace our better angels.

There’s also the Andrew Cuomo TV Banter with His Cable-Host Brother: Appearances by the governor were previously forbidden by Chris Cuomo’s CNN bosses (for obvious journalism-ethics reasons) but the current crisis has loosened up the rules, and these conversations are full of brotherly burns, mentions of mom, and illuminating exchanges about government and COVID-19.

And of course, the crowd favorite, Andrew Cuomo Gets Mad, in which the Governor let’s (sic) rip with some righteous indignation at Donald Trump and the lackluster federal response (a.k.a where the hell are the ventilators); Bill DeBlasio and his ambling approach to shutting down the city, and much more.

(Reminder: we already knew in April 2020 that Cuomo had in late March ordered nursing homes to take in covid-positive patients even if they lacked the means to ensure the safety of their other residents.)

Is it not glorious, in hindsight, to be informed to cavalierly that “the current crisis has loosened up the rules?” Especially when the author had told us just a few syllables earlier that the rules themselves existed for “obvious journalism-ethics reasons?”

Am I the only one that doesn’t remember an ethics update by the Association of Professional Journalists or the News Guild?

Call me crazy (if you haven’t already), but was April 2020 not for most of us a time of rule tightening rather than loosening?

While Andrew Cuomo was issuing diktats as to when (or whether) New Yorkers could go out, where they could go, whom they could see, and how they could see them, the rules on what was and was not ethical in terms of covering him in the media were apparently being set aside as inconvenient. What do ethics matter when the adoring crowd is crying out for more Trump bashing?

In other words, the rules for the behavior of citizens in their daily lives were tightening while the ethical code of conduct among the establishment was apparently loosening to the point of frivolity.

That certainly tells us something.

And the lighthearted way in which Vanamee (and so many others like him) makes this allowance tells us even more.

It tells us these people are all retarded.

The people who championed Andrew Cuomo as a possible presidential candidate; the people who paid him millions of dollars to write a book about his own brilliant leadership (so brilliant it produced the highest pandemic death rates in the United States) even while he was still in office with New Yorkers dropping like flies; the aides or staffers who actually wrote that book for him while on the government payroll; the people who gave him an Emmy Award for his television appearances: this isn’t merely cronyism—a kind of tacit coordination throughout the establishment—but something even worse.

The American establishment has become completely untethered from foundational principles of right and wrong.

The American establishment seems to believe that the very idea of “right and wrong” is an elastic construct, entirely artificial, mere clay to be sculpted into whatever form serves their purposes.

Well, maybe they don’t believe that, but it’s certainly how they act.

And why do they act they way?

Because, as a famous member of our establishment once observed, when you’re a star, they let you do it. You can do anything.

And the mere fact that you can’t means you’re no longer a star.

Back in the late 1990s, a president beloved by the establishment did some pretty naughty things. His political opponents went after him for his transgressions—less because they disapproved of his immorality, one can assume, than because they thought it would be enough to bring him down.

In response, establishment feminists abandoned feminism in support of a man they considered their ally—their ally, it should be noted, in the very feminism they were betraying with their support of him.

An interesting piece from the era (“How Bill Clinton Neutered the Feminist Movement,” Marjorie Williams, The Independent (UK), April 3, 1998) is worth a read if you need a refresher. But one passage represents an almost perfect distillation of the moral rot I’ve been describing:

The resulting exchange, published by in (sic) the New York Observer’s 9 February issue, was galactically strange. The women agreed that they liked Clinton better for having had a titillating affair; after all, he’s kind of a hunk. Jong, for one, wants a president who is “alive from the waist down,” and Marx declared him “cute and getting cuter all the time.” They pronounced Starr (in Friday’s words) “a big sissy”, and speculated about whether Lewinsky had swallowed the President’s semen. “Oh,” squealed Jong, “imagine swallowing the Presidential come.”

It was the most embarrassing thing I had read in a long time. But then I opened the next week’s New Yorker, which contained a swooning “Fax from Washington” written by Tina Brown herself, describing the 5 February White House dinner for British Prime Minister Tony Blair. The subtext was that the Clinton scandal had marvellously improved the President’s aura: it made him deem (sic) so … hot “Now see your President, tall and absurdly debonair, as he dances with a radiant blonde, his wife… Amid the cliches about his charm, his glamour is undersung… Forget the dog-in-the-manger, down-in- the-mouth neo-puritanism of the op-ed tumbrel drivers, and see him instead as his guests do: a man in a dinner jacket with more heat than any star in the room.”

After twenty-plus years of forgetting the “down-in-the-mouth neo-puritanism” of the 1990s editorial pages and normalizing discussion of things like the swallowing of “presidential come,” we’ve reached a point where establishment ethics and morality have been reduced to weapons that can be fired at will and justified after the fact by whatever tortured logic circumstances require.