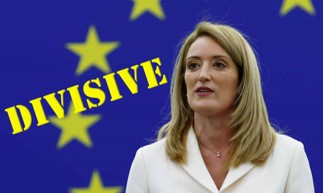 “Some say that the question of abortion is necessarily nuanced,” she wrote in 2021 Facebook post. ” I don’t agree. Either we are for. Or we’re against. There is no middle road.”

She is proudly and openly for.

Is it appropriate that Denmark, whose restrictive abortion laws enjoy broad popular support, should have a woman with such opinions as its head of state?

Doesn’t it send the wrong signal to have such an adamant supporter of abortion as Prime Minister?

That’s a question you will never hear DR ask anyone, anywhere, under any circumstance.

But it’s precisely the question DR asks about the new president of the EU Parliament, Roberta Metsola, elected into that post yesterday by her fellow MEPs.

For just the third time, the European Parliament is led by a woman. But her view of abortion is creating divisions
Per Bang Thomsen, DR.dk, Jan 18

Metsola hails from Malta, the smallest nation in the EU and the only one in which abortion is outlawed.

Speaking to Danish Conservative MEP Pernille Weiss about Metsola, DR asks: “Don’t you think it sends the wrong signal to have an abortion opponent in the presidency?”

How utterly oblivious to the foundational principles of republican government do you have to be to merely entertain such a question, much less ask it of someone?

Weiss’s answer is remarkably constrained, given the absurdity of the question:

“No, not at all, not at all. Then you could go into detail on other issues in relation to political colleagues and exclude them from top positions, because in someone’s perspective they held a particular point of view. I don’t think it’s an outlier position, because it’s one she shares with a lot of people. And the EU mustn’t interfere in whether the individual countries offer abortions or not,” says Pernille Weiss.

Thomsen must have been scratching his little head over this answer, since it expertly annihilates the very premise of his question. Perhaps that’s why the article ends with that exchange.

We’ll get back to Thomsen’s question later, but first let’s review some of the other responses he solicited.

Earlier in the article, the (red-green) Enhedslisten MEP Nikolaj Villumsen gives Thomsen an answer presumably much more to his liking:

Malta’s the only country in the EU where abortion is still illegal, and criticism from the left has been considerable. Enhedslist’s MEP, Nikolaj Villumsen, calls the day’s election “deeply tragic.”

“When you look at Simone Veil”—whom DR notes was the first female president of the European Parliament—”she stood in the vanguard of the fight for French women’s abortion rights. Here we are in 2022 with a female opponent of abortion as President of the EU Parliament. Unfortunately things don’t always go in the right direction. Not all in relation to equality,” he says.

Deeply tragic. Not going in the right direction.

Social Democrat MEP Niels Fuglsang says “it’s way out there that the European Parliament is being led from a viewpoint that’s fundamentally hostile to women.”

That’s a man declaring that the new president, a woman, is “fundamentally hostile to women” because she doesn’t share his beliefs on a particular issue.

Well, she’s just a woman. I’m sure she’ll fall into line once a man explains things to her.

Now let’s get back to the question with which DR wraps up the article: the one that asks a conservative MEP whether she thinks it sends the wrong signal for someone with Metsola’s view of abortion to ascend to the presidency of the EU Parliament.

There’s so much wrong with that question it’s difficult know where to begin.

Is there only one “correct” opinion on abortion?

If so: what is it, when was it determined, by whom, and on what basis?

Are Thomsen and DR suggesting a litmus test for presidency of the EU Parliament?

Is abortion the only issue on which a politician’s opinion “sends a signal?”

Has Thomsen made any effort to ascertain Metsola’s opinions on cannibalism? Have her thoughts on astrology, Bigfoot, and UFOs been vetted? Are they all correct? What signals are they sending?

Had an abortion enthusiast been elected to the presidency, would DR fret over the message their election sent to abortion opponents? (A quick search on DR for “Sassoli abortion” turns up no results, so apparently there were no concerns with respect to Metsola’s predecssor, an Italian Social Democrat.)

Does Thomsen assume all Danes are like-minded with respect to abortion?

Does Thomsen understand that Danes have different opinions on many issues?

And let’s not forget the headline of Thomsen’s piece, with its emphasis on Metsola’s abortion views “creating divisions.”

Has any politician supportive of abortion ever been accused of creating divisions by the establishment media?

If abortion opponents can create division merely by disagreeing with abortion supporters, is the opposite not necessarily just as true?

Forget abortion: is it not “divisive,” in this stupid and repugnant sense, for any public official to hold opinions that other people disagree with?

Is there any politician in any office, anywhere, who could stand up to such a standard?

This is what many on the right find most exasperating about the left and the media: their belief that their views are all scientifically correct and morally salubrious, and that any disagreement can therefore only be imputed to ignorance or evil.

Roberta Metsola hardly seems a divisive figure. As Thomsen notes, when asked about her opposition to abortion, which she has in the past described as “categorical,” she reponded by saying this:

“The European Parliament has been unequivocal when it comes to sexual and reproductive health and rights. It has repeatedly called for better protection of these rights,” she said, stressing that “that will be the position I am going to promote.”

Sounds more than conciliatory to me: sounds downright accomodating.

So how is her view of abortion “creating divisions,” when she’s pre-emptively committed herself to supporting abortion as the Parliament’s President?

For that we must turn to the lede of Thomsen’s article: “The election of the 43-year-old Maltese to the powerful post has divided the Danish Social Democrats.”

Suddenly things begin to make sense. Sure, the headline says it’s Metsola’s views that are “creating divisions,” but that’s apparently only because Denmark’s Social Democrats are divided on them and that’s her fault.

Because that’s how it works.

Just as my support for the Patriots creates division among friends of mine who support other teams. Why am I such a divider? Why can’t I support the Packers, or Cowboys, or Steelers, as they do, so all of us could watch football in harmony?

That’s precisely the approach DR is taking: Roberta Metsola is creating divisions within the Danish Social Democrats by having the one thing that no one on the political right is permitted to have: an opinion.