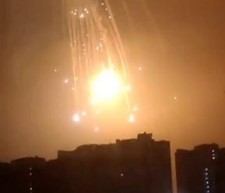 Events are happening too fast to keep up. The public statements of government officials on every side have to be interpreted as psy-ops or propaganda (or both). The media have spent the past five years proving themselves not just unreliable but deceptive.

So I’ll be the first to admit I have no idea what’s actually going on right now beyond two obvious and indisputable facts: Russia is invading Ukraine and we’re apparently going to let them have it.

Danish media coverage, like the coverage of most other countries, is at hair-on-fire level. Here’s DR’s homepage Friday morning:

Coverage, coverage everywhere—and not a drop to drink. That is: not a word of it to be trusted.

I’m sure there’s some accurate journalism in there, little nuggets of accuracy scattered throughout the general excrement like the crunchberries in a bowl of Cap’n Crunch, but with our modern news meda, who can tell what’s what?

The only certainties seem to be that Putin will get what he wants and Ukraine is screwed.

Ole Puddinhead made it very plain last night (European time): “…let me say it again: Our forces are not and will not be engaged in the conflict with Russia in Ukraine.”

Think of it: his administration, and that of his former boss Obama, didn’t think the American people were entitled to read massive legislation until after it was passed (“you have to pass it to find out what’s in it”), but they think it’s good policy to telegraph their geopolitical intentions out to the world with total transparency.

American citizens have no right to know what their own government is about to do to them—but Russia deserves to know that America won’t do anything to prevent them from taking Ukraine.

And with China licking its lips over Taiwan, perhaps the American president could have sown some uncertainty if only for their benefit, even while throwing Ukraine under the bus. It would have required only a single sentence, something along the lines of, “America’s strategic and security interests in Ukraine are insufficient to justify the involvement of our military forces—unlike our interests in other parts of the world, like the Middle East and Taiwan.”

Even if it were pure bluff, it would have complicated the CCP’s calculations.

What’s more, Biden seems somehow proud of his having seen this coming. He even opened his statement by reminding us how very foresighted he’d been:

Sorry to keep you waiting.  Good afternoon.  The Russian military has begun a brutal assault on the people of Ukraine without provocation, without justification, without necessity.

This is a premeditated attack.  Vladimir Putin has been planning this for months, as I’ve been—as we’ve been saying all along.

It’s true: Biden has been predicting this for months. Doesn’t that make it all the more damning that it couldn’t be prevented? Predicting bad outcomes is a role for advisors, pundits, and taxi drivers. The president’s role is to try and prevent them.

The only logical explanation for having seen it coming but not having stopped it would be a lack of either the will or the power to do so. In other words, either he tried and failed or didn’t even bother trying.

Is that something any competent statesman, much less the “leader of the free world,” should emphasize at a televised press conference while missiles are being fired into a European country?

Instead of wondering whether America or NATO might lash out one way or another in Ukraine’s defense, and factoring that into their nervous calclations, our adversaries are secure in the knowledge that we’re sitting on our hands: whether that’s because we want to or because we have to is entirely academic.

All of which is only worsened by Biden’s bluster that the sanctions that have not worked in the past and are not working in the present will surely work in the future. Consider some of the Q&A from his Thursday press conference:

PRESS: And—and with that—with his (Putin’s) ambitions, you’re confident that these devastating sanctions are going to be as devastating as Russian missiles and bullets and tanks?

BIDEN: Yes. Russian bullets, missiles, and tanks in Ukraine. Yes, I am.

PRESS: But you’ve been talking about the threat of these sanctions for several weeks now—

Meanwhile, over at NATO, Secretary General Jens Stoltenberg (whose name translates to something like “the mountain of pride”) offered the same kind of rhetoric—the kind of stuff derided by Churchill as “decided only to be undecided, resolved to be irresolute, adamant for drift, solid for fluidity, all-powerful to be impotent.”

Just like Ole Puddinhead, Stoltenberg notes right up front that “Sadly, what we have warned against for months has come to pass.”

He even backs it up immediately with an acknowledgement of impotence: this came to pass “Despite all calls on Russia to change course and tireless efforts to seek a diplomatic solution.”

They called on Russia. They made diplomatic efforts—tirelessly. And the massed Russian army fought right through their Maginot Line of words.

Stoltenberg then launched into what reads like a vers-libre poem on what’s going on, how awful it is, and how angry it makes NATO. He explains that NATO is moving some resources around to protect its member countries in Eastern Europe, and wraps things up much the way Biden did in his own presser.

Biden conclusion: “And in the contest between democracy and autocracy, between sovereignty and subjugation, make no mistake: Freedom will prevail.”

So either “we won’t do anything but freedom will win” is the official western response, or Biden’s fallen back on his old habit of plagiarism.

Either way, it’s not a very inspiring line to take. Men of the west, sit back and let it happen!

Putin’s out there threatening to rain hellfire and destruction on anyone interfering with his conquest of Ukraine, and the American President and the Secretary General of NATO are both saying, “we’re not gonna do a damn thing, but trust us: freedom will win.”

That’s not to say America and NATO should start lobbing missiles at Russia or deploying troops to Ukraine… but at the very, very least Putin ought to have been allowed to worry that they might.

Even at this late date, with Russian forces closing in on Kiev, America and NATO could probably at least mitigate the severity of the invasion by leaving our intentions as an unknown variable for Putin to fret over.

Instead, we get “Our forces are not and will not be engaged in the conflict with Russia in Ukraine.”

Translation: “Whatevs, Vlad. You’re a very naughty man and you’re making us very angry, but Ukraine is your oyster.”

How long until we’re being told our forces are not and will not be engaged in the conflict with China in Taiwan or Hong Kong?

And from there how long until we’re suddenly informed that things have deterioriated so badly that we’ve been forced to embark upon a two-front global war with Russia and China because someone forgot to deploy the Prevail option on freedom and we must therefore scramble off to war against two nuclear powers?

It’s nice to think that won’t happen—but trusting freedom to prevail on its own may not be the best strategy.

Make some menacing moves in the south Pacific. Don’t just put placeholder forces in Eastern Europe: arm it to the gills, with thousands of NATO troops lining every eastern border. Run drills and exercises all over. Leak confidential meeting notes in which western leaders are debating whether the use of nukes is ever justified, then deny those conversations took place because of course we would never use nukes. Move the NATO fleets around. Buzz someone’s airspace. Act scary for god’s sake. Start rumors of NATO deploying wild new weapons the general public has never heard of before and then deny them emphatically. We don’t have to go charging off to war, but we do need to walk tall and strong, chests out, chins up, eyes steely.

Or just hand the keys over to Putin and Xi and be done with it.