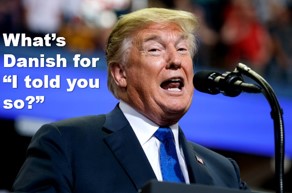 Flanked by the leaders of four other parties, Prime Minister Mette Frederiksen held a press conference last night to announce that a historic, cross-bloc political agreement had been reached.

“Given the gravity of the current situation in Ukraine,” the Prime Minister said, “the government and our partners in the four parties represented here tonight have reached an historic agreement to change Denmark’s defense posture.”

“And how,” interjected the Conservative’s Søren Pape Poulsen.

“It’s time to carry our own weight in NATO,” the Prime Minister resumed.

“Truly,” agreed Venstre’s leader Jakob Ellemann-Jensen, “we’d been meaning to get around to that.”

“It’s time to end our dependence on Russian oil,” the Prime Minister resumed.

“And gas,” the PM acknowledged. “And it’s time for the entire European Union to take a more proactive role in its own defense.”

“Yes,” Mette Frederiksen concluded. “So in conclusion, we stand here before you tonight to announce that effective immediately, there is cross-party support for Denmark’s foreign policy to go full Trump.”

The preceding dialog is what Dan Rather would call “fake but accurate.”

In a televised press conference on the evening of Sunday, March 6th, the Social Democrat Prime Minister essentially offered a total embrace of Trump policy, with those four party leaders alongside her for support in what must have been an acutely painful acknowledgment.

Denmark will ratchet defense spending up to the NATO-specified 2% of GDP by 2033, just as Donald Trump was urging the nations of NATO to do.

Denmark will seek to achieve energy independence from Russia as soon as possible, effective immediately, and will seek to persuade all other members of the European Union to do the same, just as Donald Trump was urging Europe to do.

And there will be a referendum on June 1 to give Danish voters an opportunity to overturn Denmark’s exclusion from the European military (an exclusion arising from Denmark’s 1992 referendum on the Maastricht Treaty, which voters rejected), so that the Danish armed forces are fully incorporated into the European Union’s defense mechanisms.

(As a Danish citizen I’m personally opposed to that last item, but that doesn’t change the fact that it fits right into the Trump doctrine and is suddenly being warmly embraced by a coalition of government and opposition parties in Denmark.)

This Danish turnabout comes not long after policy changes along the same lines were hastily implemented across Europe, most notably in Germany. That country reversed 75+ years of policy against militarization.

This change of heart across Europe, this sudden embrace of Trumpian policy, is the result of a geopolitical reality best expressed by renowned foreign policy expert Mike Tyson: everyone has a plan until they get punched in the mouth.

For decades, European nations underfunded their militaries because they believed themselves to be unthreatened.

At the same time, they treated their energy needs lightly because they believed a green-energy economy was right around the corner.

When Donald Trump, as president, prodded Europe to take their NATO (and other defense) commitments more seriously, European leaders and media accused him of threatening NATO. (Former Danish PM Ander Fogh Rasmussen, while still serving as Secretary General of NATO, publicly concurred with Trump on this issue and deserves credit for his clearsightedness.)

When Donald Trump, as president, tried to block the Nord Stream 2 pipeline from Russia to Germany by raising heavy sanctions against businesses involved in any way with the pipeline, European leaders and media scoffed at his concerns, pointing out that Europe and Russia had all agreed that the flow of gas would never be used politically.

Then reality punched Europe in the mouth.

Their actions now demonstrate an understanding that the real threat to NATO was their own unwillingness to live up to their responsibilities and that increasing their reliance on Russian gas was catastrophically stupid—and mortally dangerous.

That is, they’ve finally acknowedged reality.

Meanwhile in America, the left is still blaming the Dread Tyrant Trump for a war he did more than any other western leader to try and prevent—even while his policy prescriptions are being embraced even by the leftist government of Denmark.

While Denmark and Europe go full Trump on defense policy, America itself is only going partial Trump: Biden has reversed his reversal of Trump’s Nord Stream 2 sanctions, true—but his administration is still unwilling to wean itself off Russian oil.

Better late than never, but it’s obvious in retrospect that Vladimir Putin was emboldened because the western powers had gone full Biden.

UPDATE (March 8): This video of the Dread Tyrant Trump warning Germany about the danger of dependence on Russian oil began making the rounds not long after this article was published. Let the giddy laughter of the German delegation sink in. Let the profound unseriousness, arrogance, and idiocy of those people sink all the way in. And next time you find yourself wondering why the world is on fire, remember these are the kinds of people we put in charge of the matches.