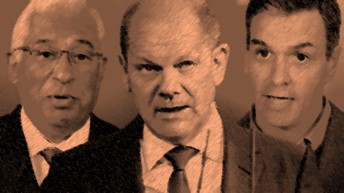 This is a pretty remarkable headline:

Election interference by foreign countries is supposed to be a bad thing, isn’t it?

That’s what American Democrats and their international allies—everyone who wants to sit at the cool kids table in the UN cafeteria—have been telling us since 2016.

The French should stay far away from the right-wing and strongly EU -skeptical Marine Le Pen, who has maintained close ties with the regime in Russia, and instead retain the center-liberal Emmanuel Macron, who wants to strengthen European cooperation and fight for the common values.

Aren’t European heads of state in particular supposed to mind their own business with respect to elections in other European states? I thought there was a whole tradition of that. Oh well—as Montesquieu said: Tradition shmadition.

“For us, the second round of the French presidential election is not like any other election. For the election facing the French people will be crucial for both France and for all of us in Europe,” say the Chancellor and the two Prime Ministers.

“It is the choice between a democratic candidate who believes that France is stronger as part of a powerful and independent EU, and then a candidate from the far right, who openly takes sides with those who attack our freedom and our democracy.”

It’s difficult to muster the requisite contempt for these people. They despoil everything they touch, everything, most of it beyond recognition, and then when people get sick of it and start looking for alternatives they gang up on the wretched rabble and start bleating about freedom and democracy and oh my god the children.

And they even fuck that up: I mean, how finely tuned does your calibration have to be to realize that maybe having a German chancellor telling the French how to vote isn’t a good look?

I mean, Macron supporters are probably pleased to learn that their choice is backed by leaders of other European countries. (“Hooray! Germans and Spaniards and Portuguese leaders would only support a French president who’s totally invested in doing what’s right for France!”)

But Macron supporters aren’t contemplating a vote for Le Pen, so appealing to them doesn’t seem like a productive use of a German chancellor’s time if he wants to ensure Le Pen’s defeat.

I find that a questionable proposition.

Although Marine Le Pen was quick to distance herself from the Russian invasion of Ukraine, she has previously spoken highly of President Putin, whom she also visited in Moscow before the 2017 presidential election.

At the time, she told the BBC that the main lines of her policy were “the same main lines that Mr Trump (former US President, ed.) and Mr Putin are defending.” In addition, in 2014, her party borrowed almost DKK 67 million from a Russian bank with close links to the regime in the Kremlin, on which it continues to pay.

You know who else spoke highly of President Putin before the February invasion of Ukraine? Pretty much everybody, at some point or other, because that’s how diplomacy works.

She and her party borrowed money from Russia in 2014 and they’re paying it back? So effing what?

For context, check out this Politifact “fact check” of a political meme that was making the rounds on Facebook back in 2018:

The post was flagged as part of Facebook’s efforts to combat false news and misinformation on its News Feed.

As secretary of state, Clinton did serve on a government board that ultimately approved a transfer of uranium, but she wasn’t the deciding vote. And the Clinton Foundation did receive $145 million from parties involved in the transaction — but the dates of a large share of the donations and the deal don’t add up to suggest a quid pro quo.

Mueller was the FBI director at the time, and the FBI was investigating corruption by the Russian company involved in the deal before the transfer was approved. But he played no role in delivering anything that we could find.

Talk about being damned with faint praise: sure, Clinton was involved in the sale of uranium to Putin, but come on, you guys, she wasn’t the deciding vote! She was just one of many votes in favor of selling uranium to Putin! And sure, her “foundation” got a seventh of a billion dollars from Russia, but you can totally tell from the timing that it wasn’t quid pro quo, because shady political grift always happens on a very exact timeline that’s very obvious to anyone looking at it. And yeah, the Russian company involved was corrupt as hell, and being investigated by Mueller, but he didn’t actually deliver anything! He’s an old man, how much do you think he could carry?

How much uranium did Marie Le Pen sell to Putin?

How many millions did Russia give her or her party?

DR is at least honest enough to acknowledge this is unusual, even if they don’t seem unduly troubled:

It’s certainly not normal for foreign heads of state and government to interfere as directly in another country’s elections, as the German Chancellor, the Spanish Prime Minister, and the Portuguese Prime Minister are now doing.

Especially not in an election as tense as the French, where the French are deeply politically divided. But the three politicians, all of whom are Social Democrats, believe that too much is at stake for the whole of Europe to keep quiet.

That’s a familiar refrain. It’s what AOC recently said about the prospect of Republicans winning a majority in the American House of Representatives this fall, more or less.

“If we lose the House, this is no joke—January 6 was a trial run and a lot of people don’t seem to understand that,” said the former bartender, citing no evidence and offering no elaboration for her theory that the January 6 riot at the Capitol was a coordinated dress rehearsal for something and then something and possibly something else and thereby the end of democracy in America.

This is the real pandemic right now, the serious pandemic: western leftists are destroying western civilization with their idiotic ideas and people are getting tired of it. Since the left can no longer defend their obviously catastrophic notions about governance they’ve taken to simply screeching that anyone with different ideas wants to overthrow freedom and democracy and kill all the puppies.

Whether or not Le Pen wins in France on Sunday (and I suspect she’ll lose), expect more of this all over the west: it’s all the left has left.