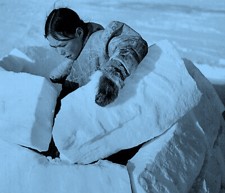 This is fascinating stuff:

…if the Danish workplaces lower the temperature, this could have negative consequences for women’s productivity, writes (the trade publication) Fagbladet 3F.

Women are more susceptible when the temperature deviates from their preferred degrees, shows a study from the University of Southern California.

Note what is not being said: they are not saying “people who identify as women.” Nor are they saying “biological women.” They’re saying females, and women, as though these were perfectly ordinary words that everyone understood.

And that’s because they’re perfectly ordinarily words that everyone understands.

At the same time, they’re unapologetically suggesting that there are physiological differences between men and women—as though it were entirely unobjectionable to suggest that men and women were not interchangeable.

Which, in fact, it is. Because in Denmark even idiots understand that men women aren’t the same. Something even American children once understood as a given.

Denmark has not yet been infected with the mind virus degrading American life, so our news media are still allowed to describe the world in terms most of us understand.

In one of the points on the Energy Agency’s list of savings advice, it’s recommended that companies only heat the rooms up to 19 degrees (Celsius). But in addition to comfort, lowering the temperature can have a significant impact on productivity if the majority of employees are women.

If, on the other hand, there is a predominance of men, then according to the study, this can have a positive effect, as men, unlike women, benefit from cooler surroundings.

The science says so:

In the American study, which was published in the recognized peer-reviewed journal PLOS ONE, 543 people participated who had to complete three different tasks in room temperatures that ranged between 16 and 32 degrees.

And there was a significant deterioration in the women’s test scores and productivity when the temperature fell below 21 degrees.

Fortunately, and remarkably, science has found a cure. According to Bjarne W. Olesen (“head of DTU’s International Center for Indoor Climate and Energy,” and a man “who has helped shape the current international standards for indoor temperatures”):

If you dress in such a way that you feel that the temperature is comfortable, then there will not be such a big difference between men and women.

Like they say here in Denmark, “There’s no bad weather, only bad clothing.”

Anyway, if you didn’t click through to read the whole sciencey article, I think I can summarize: women don’t work as well as men do in colder temperatures but if they wear warmer clothes it’s not a problem.

It’s a hell of a bomb to drop on people getting ready for the weekend, but there it is.

File in: what would we do without experts?

(I miss Taranto’s Best of the Web)

I do too, very much. The Michael Jordan or Tom Brady of political commentary.