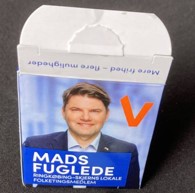 DR is taking a long, hard look at election swag.

The lede elaborates: “Parliamentary candidates hand out thousands of gifts during the election campaign. And ‘the crap works,’ says the expert.”

You can hardly avoid bumping into a parliamentary candidate on the streets and alleys these days.

It’s true. The healthy ones are hazardous enough, but the streets are beginning to pile up with the broken bodies of candidates who took a few too many bumps.  Those are the ones you’ve got to look out for when you’re biking.

Of course, they want to draw attention to themselves and diligently hand out small gifts to get voters talking or remember candidates when they return home.

Small gifts? I believe the word Juhl is struggling for is bribes.

Buns, condoms, and the classic red roses are just a few examples. Because there are almost no limits to what parliamentary candidates hand out to all of us at the moment.

That’s not entirely true: one candidate offered me a chocolate bar and when I told her my vote could only be had for a promise to lower my taxes she turned and walked away—limped away, actually: they really are getting bumped around.

One of those who have prepared for the election campaign with tangible election advertisements is Venstre’s Mads Fuglede. He’s handing out 5,000 boxes of chewing gum to potential voters.

“It’s a little gimmick that I can hand out together with a brochure, for example. On the box there’s a mini election poster and my slogan,” he says.

A little treat is quite normal. Hard candies and gummy bears are also handed out right and left. But it was no accident that chewing gum came in (Fuglede’s) box.

“It takes longer to eat a whole pack of chewing gum, and then voters carry the box with me on it for a longer time. At first I thought I’d use pastilles, like a Gajol, but they’re gobbled up too quickly and then I’d wind up in the trash too quickly,” says Mads Fuglede.

He’s smart enough to think all that through, but not smart enough to avoid telling a journalist he’s afraid of ending up in the trash bin too quickly: his name and the Danish word for garbage can are now inextricably linked on Google—and note that the cited text says he’s worried about getting tossed into the trash too quickly without providing any context:

(Yeah, I know, it’s a small and stupid thing, most likely meaningless, but it certainly demonstrates something and some day I might even figure out what that is.)

And there are good arguments for keeping up the large-scale gift-giving, says Kenneth Thue Nielsen, former election researcher and now director of the analysis company methods.dk.

“The crap works. We can see that getting votes (requires) a wide range of initiatives and activities that make us voters jump on board,” he says.

The candidate activity I find most attractive is promoting causes I support, but that’s clearly just me.  I’ll happily accept bribes from candidates I oppose: the more the better, since every gift they give to me is one less bribe for them to hand out to someone who might actually be induced to vote for them.

“Even if the politicians don’t know exactly which of these voter-related activities work best, they are wise to make use of as many of them as possible,” says Kenneth Thue Nielsen.

In marketing we call that kind of blind approach “spray and pray”—no targeting involved, you just spew the spam out there and see who bites.  It’s a stupid and ineffective way of doing business, unless you’re pushing viagra, and it tends to cheapen one’s brand, but what is electoral politics if not a stupid and ineffective way of promoting brands already damaged past the point of redemption?

Every party in Denmark is already opposed by at least 70% of the population, so what have they got to lose?

There has been a drastic change in when we voters decide what we want to vote for.

In the 1970s, three out of four people had already decided what they wanted to vote for, even before the election campaign had started. At the latest general election in 2019, it looked somewhat different. Here, six out of ten voters only made up their minds during the election campaign.

Journalists are bad at math and even worse at communicating it.

What Juhl is trying to say is that back in the 1970s, fully 75% of the Danish electorate made up their minds how to vote before campaigns even got started, but only 40% of the electorate does that today.

Not that it matter: these kinds of statistics are entirely meaningless because it’s impossible to get an accurate measurement of something as ambiguous and unverifiable as the moment at which someone makes a decision.

And have their been actual drill-downs into how many people who decided before the election ended up changing their decision once it got underway, or are we just comparing pre-election campaign polls to the final results and attributing any variation to changed minds?

However, it is difficult to say whether an apple or a licorice candy weighs more in relation to which box we check on the ballot, says Kenneth Thue Nielsen.

“Various small measures such as handing out chewing gum, ringing doorbells, or hanging up election posters can make the difference as to whether voters tick for one party or another,” says Kenneth Thue Nielsen.

This is not a mathematical muddle, but a logical one.

Handing out chewing gum presumably involves a direct personal encounter with voters—a quick and shallow one involving a cheap and shallow bribe, but personal nevertheless.

The ringing of a doorbell accomplishes nothing unless someone answer the door and is addressed personally by someone prepared to make a persuasive case for their themselves (or their candidate, if they’re just a campaign volunteer)—but assuming that’s what happens, it can be very personal and very persuasive.

The putting up of campaign posters isn’t at all personal: it’s just advertising.

The quick and shallow act of handing a voter some chewing gum or a red rose or a condom and asking for their support probably doesn’t produce a lot of party affiliation changes.

Campaign posters might, but the overwhelming majority of them in Denmark are simply pictures of the candidates’ faces, along with their name and party. Mixed in with those are a few issue posters—the red-green party Enhedslisten, for example, has splattered a lot of Copenhagen with posters saying “Fight housing speculation.” I have yet to see a Danish campaign poster that seems intended to do much more than remind inattentive voters that there’s an election underway and the candidates would very much like our votes.

A personal conversation between a candidate or campaign worker and an actual voter, on the other hand, can work wonders—as any direct human interaction can. That’s why phrases like “pressing the flesh” and “kissing babies” have entered the lexicon: because they work.

Especially during this election campaign, there are votes (to be had from such) activities. Because there is a prospect of a new Danish record (being set for) how many Danes change party (in a single cycle). The latest record was the landslide election in 1973, where 44 percent voted for a different party than (they did in) the previous election.

Sorry for all the parenthetical insertions, but even in Danish that text wanted a little tidying up.

This time, it appears that 46 percent are going to vote differently than they did last time. This gives the politicians a big field to play on.

If we already “know” that 46% are going to vote differently—something we can only know because they say they’re going to—doesn’t that suggest that these voters have already made a kind of decision?

I mean, do we know for a fact they’ve decided to leave their old party without yet having chosen a new one?

Isn’t possible a lot of that 46% isn’t just people abandoning one party and shopping around for a new one, but people who only left the old party because they wanted to support a particular new one?

Are such people really up for grabs? Are they, as less enlightened generations used to say of divorcées, “hot to trot?”

The parliament’s many candidates are making an effort to get our attention. Therefore, they also try to get the messages across with their gifts.

Stine Isaksen from Alternativet, for example, has crocheted upwards of 3,000 flowers from leftover yarn. It’s to show that sustainability is high on her agenda.

She knows that it’s a struggle to stand for election, and therefore she has to use different activities to have a conversation with the voters. Although she’s aware that it would probably be most environmentally friendly to completely drop the eye-catching flowers.

If she knows it would be environmentally friendly not to do it, and she’s doing it anyway, maybe she ought to think her priorities through a little more carefully?

“Here, potential Alternativet voter: allow me to show you how much I care about sustainability by giving you this flower made out of leftover yarn that really should have been used to insulate low-income housing, or to feed the endangered yarn-eating warbler, or possibly in some other way less wasteful than making these little tchotchkes you won’t even be able to get rid of at your next garage sale.”

But does chewing through a pack of Mads Fuglede chewing gum or burning yourself on a cup of scalding Alternativet coffee change our attitude at all?

Didn’t the expert quoted just a few paragraphs ago say it did?

Not true for Marianne Krebs from Faaborg.

“Not at all. As in absolutely not at all. I think it’s fine, they’re standing on the street, and I’d like to talk to them. But they don’t have to catch me with a rose or other things,” she says.

Karin Jensen from Sevel near Holstebro is not much for small gifts either.

“It could be that it could lure me into a trap if I don’t see that they are there. I’m not interested in them. But if they get me talking, it might change something,” she says.

Roses, pens, and bags of sweets aren’t things that make a difference to Morten Foldberg from Holstebro in relation to whom he votes for. But he still remembers the candidates.

“I think it can create a good atmosphere around the party. It gives a kind of goodwill on that front. This means that they could become a friendly face in some way,” he says.

So the candidates are doing something that the experts say is important but voters don’t give a damn about.

Sounds like our candidates will be just perfect for parliament.