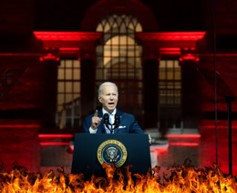 Joe Biden’s still out there telling Americans that Republicans are a threat to democracy.

President Joe Biden warned in a speech on Wednesday that the country’s democracy was dangerously close to crumbling, painting the closing stretch of the midterm elections in stark terms.

“In our bones,” the president declared at one point, “we know democracy is at risk.”

“We’re often not faced with questions of whether the vote we cast will preserve democracy,” he said at another point. “But this year we are.”

In our bones, we know the American president is not all there. Put him in a nursing home and he’d just be one more dirty old man with wandering hands and a wandering mind, boring the other residents to death with endless meandering stories from his made-up past. And stealing their puddings.

That vicious and mendacious dotard is just the lead singer for the band—the Democratic Party’s playlist is so unpopular right now that all they have left is the one song they think can move them up the charts.

“Republicans are election deniers,” sing the Democrats—who called George W. Bush “selected, not elected,” who blamed Russia for Trump’s win in 2016, who spent four years calling that duly-elected Republican president illegitimate, and who branded themselves as “the resistance.”  Whose own failed 2016 candidate publicly urged their 2020 candidate never to concede the election under any circumstances.

“Republicans are racists,” sing the Democrats—as black and Latino voters flee their party in record numbers, and despite the most recent Republican administration having done more to actually improve the lives of minority Americans than any president since the civil rights era.

“Republicans hate women,” sing the Democrats—as even middle-aged white women, their hitherto most loyal demographic, follow the blacks and Latinos away from the party.

“Republicans are violent,” sing the Democrats—whose own supporters caused billions of dollars in damage, wounded hundreds of cops, and killed dozens of people just two summers ago, and whose own partisans have attempted to assassinate a supreme court justice, attempted to massacre a baseball field full of Republican legislators, and burned down and vandalized countless anti-abortion pregnancy clinics. Oh, and there was that nice activist of theirs who drove an SUV into a Christmas parade.

“Republicans will destroy democracy,” sing the Democrats—while they weaponize the Department of Justice, the FBI, the CIA, and the IRS against their political opponents; while they work around the clock to censor and even outlaw speech; while their members of the House Permanent Select Committee on Intelligence go to bed with Chinese honeypot spies; while they brag openly about rigging the 2020 election in Democrats’ favor; and, of course, while they describe their political opponents as enemies of the state.

But the most important questionis: is it working?  Can it work?  Will it?

It depends what we mean by that question.

It doesn’t appear that it’s going to help Democrats hold on to the House of Representatives.

It doesn’t appear to be helping them hold on to the Senate.

So if “working” means helping them maintain control of Congress, the answer appears to be no.  The election is still five days away, so we’ll have to see what actually happens, but even Democratic loyalists are beginning to concede that the House at least is a lost cause at this point.

But keeping control of Congress is just a tactical goal.  What’s the strategic goal of insisting that anyone opposing the Democratic party is a threat to democracy?

It can only be delegitimization: to damage the Republican brand so badly that even if they gain control of Congress they may reign but never rule.  To make the election of a Republican president in 2024 not just difficult, but unthinkable. . . un-American!

It has to be so because it’s the only explanation for Democrats having shoveled millions of dollars to MAGA Republicans during the primaries.  They did so because they believed they’d be easier to defeat in the general election.  This is common knowledge, a known and documented thing.  That they did so tells us one of two things: either (A) they don’t really believe MAGA Republicans are a literal threat to democracy and all their hysteria is indeed just a new twist on “boob-bait for bubba” (to quote James Carville’s immortal phrase), or (B) they do indeed believe it and have therefore been knowingly empowering a real and present danger to the republic for political expediency.

It’s hard to say which of those options paints the darker picture of Democrat thinking, but they’re both awful—and one of them has to be true.

Based on all the available evidence I choose to believe it’s the former option, which brings us back to the important question: Is that working?

Is their message that Republicans will literally destroy democracy in America helping them delegitimize Republicans?

It’s hard to tell.  It will obviously take some time before we know for sure, and it may end up being one of those questions that’s never answered—like who sabotaged the Nord Stream pipelines, or who made Steve Gutenberg a star.

But it’s hard to imagine that American voters are shifting over to Republican candidates (as every poll says they are) because they want democracy destroyed.

(Philosophical aside: if the majority of Americans did in fact wish to destroy democracy, and deliberately and knowingly elected candidates committed to the destruction of democracy, would that be democratic?  Philosophical answer: yes, it would be democratic, but it would not be Constitutional: as long as the Constitution is the supreme law of the land, “destroying democracy” is just not possible through legal democratic processes.  Founding fathers for the win!)

Nor is it possible to know whether the leftist Americans lapping up the Democrats’ grotesque rhetoric genuinely believe it.  I suspect some do; probably if I were on social media those suspicions would be stronger.  But I also suspect that the vast majority of Democratic voters who accept all this talk of Republicans seeking to overthrow the American republic and install a Trump dictatorship in its place are just playing along because they think it’s good for the cause, and because they genuinely despise Donald Trump, and because they’ve never liked Republicans anyway, and because they don’t see the harm in it.

There is enormous harm in it.

It’s one thing to believe your political adversaries are misguided, ignorant, naïve, or just plain stupid: you can still believe that they, like you, only want what’s best for everyone.

But if you begin to believe your political adversaries are your actual enemies and wish to do you harm, the door has been opened to horrors.

It’s the kind of thing that should be avoided at all costs, and yet (what’s left of) the President of the United States has made the demonization of his political adversaries the cornerstone of the midterm campaign.

And he’s done so in the most underhanded way: by accusing his adversaries of lacking the very kind of comity he himself is running through the shredder every time he makes such a speech.

“They’re so divisive,” he says, divisively.

“Voting for them imperils democracy,” he says, imperiling democracy by insisting on one-party rule.

Next week’s election appears to be likely to offer the president’s truly awful messaging a hell of a rebuttal.

If they genuinely care about democracy then they’ll assess their losses, lick their wounds, and start working on a more sensible strategy for 2024.

Hopefully one that doesn’t involve persuading Americans to hate one another.

Unfortunately, poisoning the well is what the Democratic Party has been reduced to. They can’t run on their accomplishments, but at least they can try to make it impossible for anyone else to govern.

As for who made Steve Gutenberg a star, it will always be a mystery. If only there was a clue, any clue…