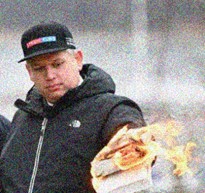 Rasmus Paludan is back in the international spotlight. I’ll just cite the lede from Danmarks Radio (DR):

Rasmus Paludan burned a Koran in Stockholm on Saturday. Now Turkey will not support Swedish membership in NATO.

Danmark’s Foreign Minister called that both shaming and shameful—the buring of the Koran, obviously, not a sovereign nation responding to a single act of free speech by issuing a geopolitical diktat.

That Foreign Minister would of course be Lars Løkke Rasmussen, who has twice been our prime minister. He was part of the right-of-center blue bloc back then; he’s the head of the new center-of-center purple party “The Moderates” now.

A spokesperson for the American State Department called “the Koran burning a deeply disrespectful act,” according to DR, and helpfully pointed out that some things can be both legal and terrible.

“Burning books that are holy to many is a deeply disrespectful act,” United Staes State Department spokesman Ned Price told reporters on Monday.

Price said the burning was the work of “a provocateur” who “may have deliberately sought to put distance between two close partners of ours—Turkey and Sweden.”

He “may have deliberately sought to have an impact on the ongoing discussion regarding the accession of Sweden and Finland to NATO,” Price said.

According to CNBC, Swedish authorities confirmed the legality of the burning but called the act “appalling.”

Getting back to the Danish Foreign Minister, Rasmussen apparently did also offer a little support for free speech, so let’s give him at least a little credit for upholding our values:

Meanwhile, according to a news site I’m not familiar with:

In response to the demonstration in Stockholm, protesters in Jordan burned the Swedish flag in front of the embassy. Thousands of protesters rallied in the streets of Yemen, while demonstrators also gathered outside the Swedish consulate in the Iraqi capital, Baghdad.

Long story short, it’s déja-vu all over again. I can’t help wonder when we’re going to stop giving a damn what people who don’t understand free speech think about speech made freely, or when we can at least respond to these kinds of reactions by saying, “We have freedom of speech in our countries,” full stop, without adding that infernal but.

Do you really believe that Ned Price thinks the burning of a Koran is disrespectful and repugnant and vile and disgusting? All those things, all at once? Does Lars Løkke Rasmussen genuinely believe it’s shameful and shaming? Do the Swedish authorities really consider it appalling?

I won’t pass judgment, but I know where I’d place my bets. after all, an American art teacher was recently fired for having shown her class a 16th century painting of Mohammed. (That link goes to the New York Times just to demonstrate it’s not a right-wing conspiracy theory.) When’s the last time anyone was fired from a university, gallery, museum, newspaper, or publishing house for having offended Christians, Jews, or Hindus?

I’m sure our diplomats think they’re playing at realpolitik by expressing horror and revulsion (and disgust and contempt etc., etc.) at an act most of us find merely stupid and trivial, but it’s not done consistently.  You may have noticed, for example, that the same diplomats rarely if ever trouble themselves to express their contempt for artwork or rhetoric that denigrates Christianity, Judaism, Buddhism, or the Church of the Flying Spaghetti Monster.

“Well,” say these realists, “Christians, Jews, Buddhists, and Spaghettinos aren’t provoked to deadly violence when their religions are denigrated.  Muslims take their religion very seriously, and we need to respect that.”

We really and truly do not.

We don’t need to respect a goddam thing, and that’s the beauty of it.

That’s not to knock the importance of respect, or to suggest that nothing is worthy of respect—or that there’s nothing respectable about Islam—it’s only to say that the minute you insist on people respecting something, you’ve already begun to devalue it.

And frankly, nothing makes me want to mock something more than being told it’s a Very Serious Thing that must never under any circumstances be mocked.

That’s the whole foundation of the western edifice: it’s what free speech means.  We can desecrate the sacred because in our civilizational wisdom we’ve decided that since we’ll never all agree on what is actually sacred, we can at least all agree that everyone’s entitled to decide for themselves, and let the chips fall where they may.

The flip side of your right to express whatever you think is the Holy Sacred and Divine Truth is everyone else’s right to express their disagreement with you—whether we’re talking about religion, philosophy, or your hair. (Seriously, has no one talked to you about that?)

Which brings us to another story about free speech, this one oozing out of last week’s World Economic Forum summit in Davos.

Apparently the EC’s Vice-President for Values and Transparency, one Věra Jourová, told Euronews that with respect to free speech on the internet, “The time of the Wild West is over.”

But at the same time, we cannot accept, for instance, illegal content online and so on. So, our message was clear: we have rules which have to be complied with, otherwise there will be sanctions.

“We’re protected free speech but will be sanctioning illegal speech,” she said—transparently.

What’s next: protecting freedom of assembly with curfews?

I probably shouldn’t have said that out loud…