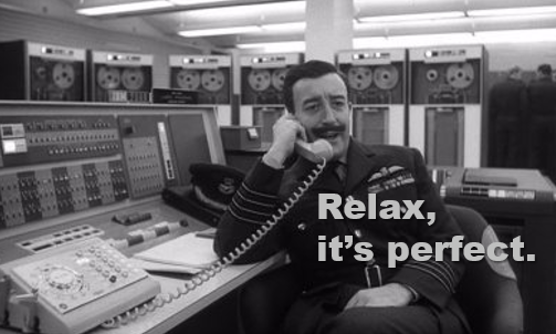 Good News! As DR notes in the article that topped their homepage Friday morning, America’s 2020 election was the most secure ever:

2020 Election Was the Most Secure Ever, but That’s Not Stopping Trump, Malthe Sommerand, DR.dk, 13 Nov

The American media have run wild with this story as well, and you can gorge yourself on various versions of the story just by typing “most secure election” into your preferred search engine.

According to the Associated Press:

WASHINGTON (AP) — A coalition of federal and state officials said Thursday that they have no evidence that votes were compromised or altered in last week’s presidential election, rejecting unsubstantiated claims of widespread fraud advanced by President Donald Trump and many of his supporters.

The statement, by government and industry officials who coordinate election cybersecurity, trumpeted the Nov. 3 election as the most secure in American history. It amounted to the most direct repudiation to date of Trump’s efforts to undermine the integrity of the contest, and echoed repeated assertions by election experts and state officials over the last week that the election unfolded smoothly without broad irregularities.

It notes that “there is no evidence that any voting system deleted or lost votes, changed votes, or was in any way compromised.” This is heartening, which is probably why it’s in bold type.

But it’s also not quite the message that DR and their American peers keep saying it is.

The Associated Press article claims that the statement said “they have no evidence that votes were compromised or altered… rejecting claims of widespread fraud.”

That’s not what the statement says. Go ahead and read it yourself, it’s short.

They’re talking about American election systems not having been compromised by outside actors or by internal flaws. They’re saying: the various systems used across the country to conduct our election were not violated.

To take this as a total repudiation of fraud is to misunderstand a few things. Or to deliberately misrepresent them.

For example, let’s take the celebrated case of Anna Britta Troelsgaard Nielsen here in Denmark. In case you’re not Danish, or you don’t remember her, she’s the woman who skimmed 117 million kroner, or close to 20 million U.S. dollars, from social services funds into her own accounts. Would you be reassured to know that an investigation of the computers she used at work revealed their software was all performing optimally, that they were virus-free, had never been hacked, and had all the latest software patches? Would that have proved her innocence?

The pressing question is not whether our vote-counting systems and procedures have been compromised, but whether the votes being counted and handled by those systems are in fact legitimate, and that the use of those systems was all on the up-and-up. You can process a ballot with perfect efficiency and security, but that doesn’t make it any more legitimate if it were cast by a man who’s been dead for twelve years. And as we saw with the “human error” that flipped 6000 votes in Michigan, even a flawless system is susceptible to human manipulation, whether accidental or deliberate.

I’m not saying, by the way, that there has been a substantial amount of illegal voting. Nor am I saying there hasn’t been. I am only saying what anyone with basic reading comprehension skills ought to understand: that systems counting votes perfectly doesn’t tell us anything about whether any given vote is legitimate, and a perfect system is still vulnerable to human abuse. A flawless system does not guarantee flawless results.

The first six paragraphs (comprising a total of eight sentences) of the DR article present the conclusions presented in the statement without much editorializing.

Then we get a new subhead, “Obama: ‘A Dangerous Path’.” Seventeen paragraphs (comprising eighteen sentences) follow. DR is true to form here. They quote liberally from the former president (who by the way remains a fiercely partisan Democrat); they point to a Tweet of the president’s citing unverified anomalies with a particular voting system; they cite an episode of Fox News cutting away from Trump spokesperson Kayleigh McEnany; and they point out that Trump and Republicans are challenging results in several states with lawsuits.

And they wrap things up by going back to the statement:

In the original statement, those paragraphs are as follows:

When states have close elections, many will recount ballots. All of the states with close results in the 2020 presidential race have paper records of each vote, allowing the ability to go back and count each ballot if necessary.

While we know there are many unfounded claims and opportunities for misinformation about the process of our elections, we can assure you we have the utmost confidence in the security and integrity of our elections, and you should too.

The first paragraph is largely a matter of fact: most states have a specific threshold at which recounts are triggered automatically, whether as a percentage or a raw count of votes, or both. You can entertain yourself for hours with the recount rules listed at Ballotpedia.org. The swing states also all have paper records of each vote. (That there have been problems determining the validity of some of the the paper votes in Pennsylvania does not make the statement untrue.)

The second paragraph is a combination of fact and opinion. The signatories to the document first state that “there are many unfounded claims and opportunities for misinformation about the process of our elections,” and this is of course tautological: anyone can say anything about anything. And there are indeed some fairly fantastic claims being made on both sides: it’s no less fantastic to say that our election was flawless than it is to say bad actors were manipulating results in the biggest population centers of the swing states.

In the second part of the second paragraph the authors express their opinion that because they feel totally awesome about the security and integrity of our elections, you should too.

That kind of thing is always going to rub a certain kind of person, like myself, the wrong way. Because you believe something is no reason that I should, especially when you suddenly widen the scope from the excellence of our systems, which is all you’ve talked about to this point, to the overall security and integrity of the elections themselves.

“Anna Britta Nielsen’s computer was free from any hardware or software defects or vulnerabilities, and we are experts in computer science, so because we are confident in the integrity of Anna Britta Nielsen, you should be too,” isn’t an argument that would have kept her out of prison.

Again, because people are awfully damn prickly these days and I don’t want to be accused of saying anything I’m not: I know nothing about our election software systems, very little about the many processes in place around them, and next to nothing about the integrity of the people responsible for them at the lowest level. But I do know a great deal about software systems in general, and the processes typically put in place around them, and I’m reasonably familiar with the limits of human integrity. And I know how to read.

None of that knowledge of mine contradicts any of the facts in the official statement, but it certainly contradicts the notion that because the voting system infrastructure was uncompromised, there cannot have been anything to question about the election.

Now, Donald Trump doesn’t help things when he tweets out something like the tweet cited in the DR article:

OK, there’ve been reports. From whom? On what basis? With what evidence? With what credibility? If there is actual evidence of foul play with these systems, shine some light on it. Otherwise, maybe hold off on using the “bully pulpit” to promote unsubstantiated allegations of this kind of massive fraud.

The problem we face in America right now is that everyone has smashed their credibility to bits. Everyone. It’s impossible to know whom to trust because the distinction between what’s real and what’s political spin has been destroyed (which is what I was getting at in a recent post on The Bloomberg Fallacy). The left spent decades making everything political and, alas, they appear to have finally succeeded. Sports, entertainment, science, medicine… it’s all become mixed up with politics.

The media bear a lot of responsibility for this not because they have become political, but because many of them (including DR), continue to pretend they are not.

How else to explain the 3½ years of establishment headlines about Russia’s ability to throw the 2016 election to Trump with $150,000 worth of Facebook ads, followed by the sudden hallelujah chorus of articles praising the spotless integrity of the 2020 election across all fifty states?

Do you believe, in your heart of hearts, that had the election broken not for Biden for Trump with all the late votes, the establishment media would still be insisting on the security and transparency of the vote? Would a 6000-vote “user error” in Trump’s favor have been as easily brushed aside as the one for Biden was?

Did you notice, for example, that all the Danish stories about American cities rolling up their sidewalks and boarding the windows of their businesses simply evaporated after the riots failed to materialize? Do you not see how huge an indictment that is of the stories that tried to lay the blame for those fears on Trump supporters? Do you doubt for a moment that the American and Danish establishment media would have nevertheless found a way to blame the violence arising from a Trump victory on Trump and his supporters? The lack of violence can’t be reported because to do so would reveal that the threat had been exclusively from the left all along.

Donald Trump claims the election was rigged against him and he is being damned for it by the very same people who made a hero of this woman:

That’s Stacey Abrams. She was the Democrat candidate for Governor of Georgia in 2018. She lost that election, but in refusing to formally concede (she acknowledged her Republican opponent would be certified as governor, but explicitly refused to concede) she became such a hero to Democrats that she was chosen to deliver their rebuttal to the 2019 State of the Union address. She was a serious short-list contender to be Joe Biden’s vice-presidential candidate.

Stacey Abrams is a hero (or, judging by the Washington Post photo, a superhero) because she fought so heroically against the voter suppression that robbed her of the Georgia governor’s mansion.

Donald Trump is the very Devil of Hell for suggesting that the flawless and totally secure American election system could produce anything but perfect and beautiful results.

Maybe Abrams was robbed, and maybe she wasn’t. Maybe Trump was and maybe he wasn’t.

But until the American media start handling things more honestly and even-handedly, or being more open and up-front about their bias, consumers of the news are going to become increasingly unwilling to believe anything said by anyone whose politics oppose their own. We’ll reach the point where people will be judging one another based on what they eat for breakfast or where they do their grocery shopping (if they don’t already).

And until the American media change, Danish media would provide Danes a great service by acting independently in their coverage of American affairs.