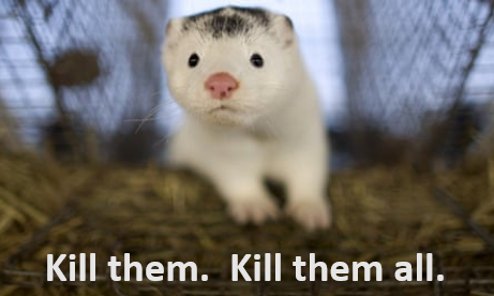 You may have mixed feelings about the Great Mink Debate raging across Denmark today. You may see the pluses and minuses of both sides. You may favor some kind of compromise solution.

Next, I ask you to imagine that this is not a purely emotional choice. It is one you have grappled with since childhood. You may even have held different beliefs at some other point or points in your life, but now recognize the errors in your youthful thinking. You are deeply interested in the welfare of minks, have done a great deal of reading and thinking and talking about it over the years, debating with friends and colleagues, and feel absolutely certain that your beliefs with respect to the current Mink Question are scientifically, ethically, morally, biologically, and philosophically correct.

Next, I ask that, as a Dane, you imagine yourself living in America. Not vacationing there, but living there. For many years. Decades, even. You have an American career, an American family. You’re immersed in American culture. But through it all, of course, you have kept abreast quite keenly of events in Denmark, and thanks to technology and (relatively) cheap airfare, you still feel relatively plugged in to Denmark and love it more than ever: you can’t help tearing up every time you hear Der er et yndigt land, or even the opening notes of the Olsen Banden or Matador themes.

Imagining all that: there you are in America, today, right now, following the Mink Question from afar, reading and watching all the coverage on Danish sites. It’s just confirming everything you believe about minks.

And then you turn on your American television, as you sometimes will, and it’s the news. That’s not so remarkable given the time of day, but what you see is remarkable: they’re talking about Denmark! About the Mink Question!

At the moment they’re talking about it from a position contrary to your own, but that’s fair enough: it’s the news, they’ll get to your side eventually.

And indeed they do, although they sure spent a long time getting there: wasting viewers’ time on all the silly emotional arguments and stupid theatrics of the other side (which side of course relies on emotions and theatrics because it can’t defend itself with reason and logic, as you can).

But when they finally do get around to your side of the Mink Question, they give it short shrift: they seem almost reluctant to present any alternative to all the absurdities they just wasted ten minutes on. And that’s it.

Well, you think, that’s why God gave us cable. You switch to CNN, and there’s Wolf Blitzer explaining everything about the Danish mink issue and getting everything entirely wrong. And there’s Don Lemon, piling on, actually mocking your position, and characterizing anyone who supports your point of view as being an obvious mink hater, too obtuse or uneducated to understand the complex realities of Danish minks.

You switch to Fox: more of the same! Brett Baier and Chris Wallace are furrowing their brows and feigning concern for the poor misinformed people like you who probably mean well but obviously don’t know anything about Danish minks.

You’re Danish! You’ve been studying minks and mink ranching and mink welfare and mink biology your whole life! And these idiots are saying you don’t know anything about Danish minks? These Americans?

But wait: here on MSNBC, there’s a correspondent who’s lived in Denmark for fifteen years. Surely she’ll get it right!

Alas: she’s even worse than the rest, standing in Rådhuspladsen and pointing to the grand old building while speaking of Christiansborg: how stupid is this woman? But there she is, telling America how Danes like you are very angry about the Mink Question because you’re poorer and less educated and much more hateful and ugly than the real Danes. You know: the good ones.

Well, it’s too much: you turn off the television. The copy of the New York Times on the sofa table catches your eye: if only it hadn’t! There on the front page is an article just as twisted and biased and wrong as everything you just heard on television. And it’s got a picture of a ferret.

Well, you’re not going to take this lying down: you’ve read so many good, intelligent, science-based articles supporting your side of the mink question that you’re just going to gather up all those links and post them on Facebook so your American friends and colleagues can get the full story. Sure, a lot of them will still persist in their mistaken beliefs, but at least they’ll have a little bit of the truth: maybe you can plant a seed that will someday bear fruit.

So you fire up the laptop, open Google, and type a Danish phrase that should lead directly to the articles you’d been reading earlier that same day.

And dear lord! It just returns all the Danish articles from the other side! The first page of results doesn’t even include any of the publications you’ve been reading from, and those are all major publications with huge subscriber bases!

You’re really on fire now, so you keep tweaking your search terms and narrowing the results until finally, finally you’ve found the links to the articles you want to share.

Violates their terms of service? It’s a scientific article from one of Denmark’s biggest newspapers! Why, just the day before you saw a Danish friend of yours who lives in the same American city post an article full of cuss words and misrepresentations of the mink industry in Denmark, and it got hundreds of likes and comments and shares… how dare they!

Well, fuck Facebook. You’ll stoop to the sewer of Twitter for this one. You log in, paste the link to the article, spend most of your allotted characters explaining how Facebook had blocked you, and hit “Send.”

Imagine that. All of it. Just imagine.