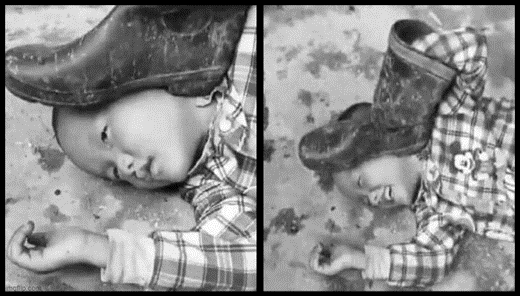 The Danish coverage of the prolonged American election has been exactly the kind of reporting I’ve come to expect. I’ve been trying to maintain a stoic calm and let the inaccuracies, misrepresentations, and idiocies wash over me—to lie back and think of (New) England. I’ve succeeded pretty well so far.

But there’s one article I haven’t been able to shake and it’s like having a tiny pebble in my shoe. I’ve got to get it out.

I understand it’s not the journalists or editors saying it’s been “four years of oppression.” Not directly. They’re just pulling that quote into the headline to give it a little extra oomph. It’s click-bait, that’s all. It’s not like the article would actually support such a stupid premise.

The article opens by setting the stage: Pennsylvania has just been called for Joe Biden, which puts him over the top and allows the news services to call the national election for him; in Philadelphia, the inhabitants pour out into the streets to celebrate.

Then it’s time to begin the transition to all the happy Biden mania—which, as the authors make clear, would actually be more accurately described as Trump hatred:

The first sentence is true and I have no reason to doubt the second. But we’re then hit with an interesting quote from someone identified only as a Biden supporter:

I’d translate that as: “We’ve been waiting for this. It doesn’t get better than this. It’s been four years of oppression from Trump. It’s about time he gets lost.”

There’s video embedded in the article. Here’s a literal transcription of what the guy’s actually saying in English:

The interviewer then asks, in English, “Why is it so amazing?”

“Oppression” is the noun form of the transitive verb “to oppress,” which has many shades of meaning in English usage.

The Merriam-Webster online dictionary offers two main definitions (for now: remember all definitions are subject to change as political circumstances require): the first is “to crush or burden by abuse of power or authority.” The second is “to burden spiritually or mentally: to weigh upon.”

Tyrants can oppress you. So can humidity. So can a memory from 7th grade.

I have no doubt that a Biden supporter would have found the past four years oppressive in the sense of its having been a mentally burdensome time. Many of them have come out and told us so. (Just two short days into this annus horribilis, on January 2nd, one Lee Siegel authored a New York Times opinion piece entitled “Why Is America So Depressed?” His answer, unsurprisingly, involved a whole lot of Trump. The year was young.)

So probably that’s what this random Philadelphian meant, right? He was just saying, “damn, it’s been unbearable having this guy in the White House.” Ding-dong, the witch is dead and all that. Right?

Except he went on. DR apparently made an editorial mistake and posted the same video of this man twice, but the text suggests the second video ought to have been a different segment:

I’ll try to reverse-engineer the quotation into colloquial English:

“As African-Americans in Philadelphia, there’s no reason we should have had to go through the oppression that man stood for. Not just in relation to blacks, but to minority groups in general.”

So much for the mental burden theory: this guy is indeed talking about four years of being by crushed by Trump’s abuse of power.

That’s a hell of a claim to leave floating out there, as DR does: the article simply moves on to explain that Joe Biden was first elected to the Senate in 1973 whereas Donald Trump was a political outsider until running for the presidency in 2016. Good to know.

What Americans of any color or creed have actually been oppressed for the past four years? Who has been denied their rights? Who has been punished, or ostracized, or belittled, or even teased because of the color of their skin? Where? In what ways? By almost every economic and social metric, the lives of black Americans improved more during Trump’s first three years than they did during Obama’s eight years. Higher income, lower unemployment, higher labor market participation rates, lower poverty rates, more business startups.

NBC news ran an article on November 4 with the improbable headline “Black men shift slightly toward Trump in record numbers, polls show.” Put aside the cognitive dissonance required to write such a headline. While tying itself in knots to try and portray this dramatic sea change as something trivial, the article does point out that, among other things, a third of all black men in the Midwest voted for Donald Trump. What’s the Midwest, you ask? It’s Minnesota, Iowa, Wisconsin, Michigan, Indiana, Illinois, Missouri, and Ohio, as well as the mostly empty Dakotas and Nebraska.

Are we supposed to believe that a third of the black male voters in America’s heartland voted for a man who was oppressing them?

“I’ve been oppressed!” is easy enough to say, but it’s a serious enough charge that it ought to be backed up by something.

And yet it’s not. The authors let it slide.

Because that’s how they roll.

A little further down in the article, we have video of another subject, a young woman (who says in the video that she hasn’t been happy for four years), who calls Trump “a fascist and white supremacist.” For some reason the authors omit “and white supremacist” from their text. I have to wonder why. If you’re going to let one guy say Trump’s been oppressing blacks and other minorities, and you’re going to let this girl call him a fascist, why not go the Full Monty and get that white supremacy charge in there too?

Maybe you think I’m over-reacting. I mean, these are Biden supporters: of course they think Trump’s a fascist white supremacist who’s been oppressing minorities. DR isn’t saying Trump’s actually guilty of any of these things (wink wink), they’re just reporting what these people are saying.

Except they’re almost never balancing that with reporting on what other people are saying. America is very plainly divided right down the middle politically, but DR seems to think only one side deserves to have their story told.

Earlier today I got an email from a colleague at work whom I don’t know very well, and who very clearly does not know me very well. After thanking me for some information I’d sent him, he added: “Tillykke med valget!”

I don’t think he meant, “Congratulations on your homeland’s ability to execute a national election without collapsing into civil war!”

Nor do I think he meant, “Congratulations on your homeland’s continued success in holding free and fair elections.”

I’m pretty sure we all know what he meant.

We can be confident that’s what he meant because that’s all he’s hearing from Danish media. (And it’s all he’d be hearing from the establishment American media as well.)

And that’s why this stuff actually matters.

I didn’t respond to my colleague firstly because I think he’d be mortified at the faux pas of having congratulated me for something I’m not at all happy about, and secondly because I think he’d probably assume I’m all kinds of nasty for supporting the racist, misogynist, homophobic, Islamophobic fascist Oppressor in Chief. It would take an actual human conversation to disabuse him of all that nonsense. Time and effort. I’ll bring it up with him the next time we’re standing together in person, when such things are possible again, maybe sipping drinks at a fredagsbar, when we’re relaxed and have some time.

God knows I’ve gotten used to conversations like that. I’ve had to.

I don’t care if he prefers Biden to Trump at the policy level, but I’d prefer he at least understand that most of what he “knows” about American politics is based on a one-sided and entirely distorted view.

That’s the harm that the Danish media do: they not only make Danes stupider about America, they’re literally poisoning Danish minds against half the American population.

It’s counterproductive and indefensible and needs to stop.