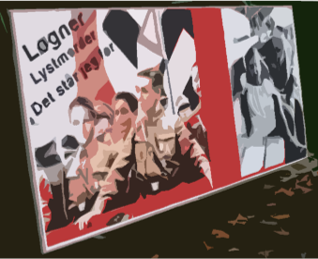 A Monday editorial from Berlingske Tidende (with a Pierre Collignon byline), coupled with a tweet from David Trads on the same day, offer an excellent case study in the establishment media’s continued acceleration toward irrelevance.

When something so obvious is so strenuously asserted, it deserves a closer look.

“If the conservative opposition wants to be taken seriously, it shouldn’t go forth with populist Trump references. And definitely not with Nazi posters. Doing so makes it too easy for the government to derail important debates about the corona effort and the mink scandal.”

The “Trump references” being alluded to are Venstre Vice-Chairman Inger Støjberg’s use of the phrase “drain the swamp,” while speaking in Aarhus on Saturday at a demonstration against the government’s mishandling of the Mink Question.

“Vi skal have drænet sumpen fyldt med Mette Frederiksens magtarrogance,” she said to a crowd of angry farmers. In English: we have to drain the swamp filled with Mette Frederiksen’s arrogance of power.

The Nazi poster reference appears to be alluding to this:

That’s certainly Hitler in the photo on the right; but I don’t know enough about Nazi uniforms to know whether the image on the left has the Prime Minister’s head on the body of Hitler or some other high-ranking Nazi. (That’s Enhedslisten’s Pernille Skipper’s head far left, and the head of SF’s Pia Olsen Dyr between Skipper and Frederiksen.) The photo first appeared on Twitter last Thursday.

Støjberg’s statement and this poster have created a lot of chatter in Denmark among the usual suspects. Venstre’s actual Chairman, Jakob Ellemann-Jensen, made it clear in a television interview on Sunday that although he didn’t hear her speech, he would consider such a use of the phrase to be… infelicitous. Donald Trump’s use of the phrase, he explained, was addressed at all the elite bureaucracy of Washington, whereas Venstre doesn’t think there’s a problem with the administrative state as a whole, only the coalition currently holding power.

Deftly handled, fair enough, but careful readers may have noted, as Berlingske does not, and as Ellemann-Jensen did not, that Støjberg spoke very particularly of the swamp of Frederiksen’s power arrogance. That’s hardly calling for the wholesale drainage of Christiansborg.

Meanwhile, with respect to the Nazi placard:

“Pernille Vermund, the leader of Nye Borgerlige, was on hand and when asked whether she thought it was okay to compare Mette Frederiksen with Adolf Hitler, she said she didn’t want to judge other people’s taste.”

Vermund’s response shook the delicate and refined sensibilities of proper conservative Pierre Collignon to the core:

“Vermund should, as the leader of a party that calls itself conservative, as the most natural thing in the world explain that this kind of attack on a political adversary can’t be tolerated.”

I know free speech isn’t defended quite as jealously in Denmark as it is in America (although in one shining moment in 2006, as Danish embassies were besieged and even burning around the world, the Danish government won my eternal devotion by refusing to apologize for something that had been published in a privately owned newspaper). Even so, I think that the use of a visual metaphor involving Nazis is nowhere near as toxic as the idea that any kind of political speech “can’t be tolerated.” One is a use of free speech to paint an adversary as a monster. The other is a call to suppress free speech. I’ll side with tastelessness over tyranny every time.

So on that much I’m in agreement with Collignon: to compare Mette Frederiksen and her coalition partners to the Third Reich is stupid. (Unless you’re a mink: then it’s spot on. And if you’re a mink who can make placards then more power to you, my semi-aquatic, carnivorous friend!)

So we can all agree that it’s excessive, or disproportionate, or stupid.

But when someone tells me that political speech of any particular kind can’t be tolerated, and gets angry enough to write an editorial because a politician was unwilling to call out a citizen for having expressed their beliefs in a manner that doesn’t meet the critic’s approval, I have to take it as a confession that the critic either doesn’t understand, doesn’t care about, or is hostile to free speech.

A man with Collignon’s job obviously understands it, and the very fact that he wrote this editorial is proof that he cares about it. So he must be hostile to it. The only sane and healthy response to people opposed to free speech is, to quote Marcus Tullius Cicero for the second time in as many days, LOLGF.

Adopting his pose as a refined and upright man of the creased-trousers right, Collignon argues that the really unfortunate thing here is that the governing coalition can now change the subject by freaking about these “irresponsible” political expressions, which he himself calls improper (urimelig). This, he fears, will somehow let them off the hook.

Vermund says she doesn’t want to judge other people’s taste in how they choose to express themselves, which is about as adult and mature a response anyone in a free society can give to someone else’s expression of what they believe. But Collignon doesn’t like that, because Collignon won’t “tolerate” vicious attacks on political adversaries, even in the form of signs patched together by random citizens, and doesn’t think that anyone else should. And everyone’s apparently down with all that on Pilestræde, because this piece was posted as a leder.

If we’re to take Collignon at his word, we deserve to know when the fuck he’s going to get around to criticizing pretty much every American politician, pundit, scribe, and activist for comparing every Republican since Lincoln to Hitler. This conservative guy who loves to write about America can’t stop writing about how conservative he is and how lovely American conservative politics would be if it were only more liberal, without ever once acknowledging the “irresponsible” and “improper” political expressions that constitute at least half of everything every American liberal says about every American Republican who isn’t dead or shilling for Biden. I mean, if the Democrats are the ones crying Hitler, aren’t they the ones beating the shit out of democracy? How can Pierre Collignon tolerate it? Doesn’t he realize those irresponsible attacks only let Trump change the conversation?

With respect to Støjberg’s use of swamp drainage metaphors, I’m at a loss. A “swamp of power arrogance” isn’t a very elegant metaphor, so it’s not something I would have advised her to say, but that’s beside the point. (“Some expressions can become so loaded,” Collignon opines, “that one has to think very carefully about whether to use them.”) Mainly I disagree with every fiber of my Danish-American being that there’s anything wrong with Inge Støjberg using an expression Donald Trump has used. Donald Trump is a talky guy, super talky, record-setting talkiness, that guy, and I’m not the only one who says so, other people say so too, smart people, some of the smartest, really, with brains so big you wouldn’t believe it, and he has said many, many things, including “covfefe.” Are we going to ban all the things he says, or just his catch phrases? How many times does he have to have used an expression to qualify as a catch phrase? Is there a fact-checking site keeping track of these things?

And how in the blue fuck does a newspaper editor become such a fucking ninny about political speech? A protestor made a mean sign! A politician didn’t bitch slap them for it! Also another politician used a metaphor that’s been used by Orange Mephistopheles. Waaaaah!

Man up, Collignon! The rest of you at Berlingske, too. It’s politics, for fuck’s sake. People say shit. A lot of it’s stupid. Sometimes it’s ugly. Nothing wrong in saying so: “That’s ugly! That’s stupid!” That’s how we on the American right deal with the left’s insistence on calling us Nazis and Fascists and jack-booted thugs just because we want limited government and free enterprise. We don’t go whining about how improper it is, or irresponsible, or dangerous to democracy. We call bullshit and move on.

Also, Collignon, you need to read some Pierre Collignon, or at least some of my previous reviews of his work. Because you can’t believe some of the things he’s said about Trump and his supporters! Why, some of it’s downright improper and irresponsible: a person of refinement could get the vapors just reading it!

“Of course one can be critical – even very critical – of Mette Frederiksen… but: But they who call her a ‘dictator’; allow posters that depict her in ‘nazi uniform’; shout ‘lock her up’ and ‘drain the swamp’ are actually playing with fire and challenging democracy. Stop yourselves!”

I wonder what it’s like to go through life with as little self awareness, as utterly and smugly unselfconscious as David Trads. To have so little awareness of one’s own words, one’s own tweets. Or to have such iron-clad conviction in the infallibility of one’s beliefs.

A week before the 2016 election, for example, Trads wrote a column for Altinget.dk that was entitled (I’ll translate): “Trads: If Trump Wins Anyway, the West Will Fall!” He states very clearly and unambiguously that Trump is a fascist who believes white people are superior to everyone else and that, indeed, should Trump win the 2016 election it would mean the fall of Western Civ.

I mean, geez, Trads, you can be critical, even very critical of Trump, but: But to call him a fascist and a racial supremacist and to predict the fall of western civilization if he wins is playing with fire and challenging democracy. Stop yourself!

David Trads might once have been an actual human being, but Twitter and Trump have clearly had the same effect on him that the One Ring to Rule Them All had on the Hobbit Sméagol: Twitter-Trads is now the twisted, sick, and broken Gollum that may once have been some kind of actual journalist.

Collignon is just a standard issue Never-Trump conservative, just like the American variety who constitute 6% of American conservatives.

I’ve never seen either one of them express the tiniest speck of dismay at the way American (and Danish) leftists have played so fast and loose with the Hitler card, and the fascist card, and the Goebbels card (it was Biden himself who played that one). On the contrary, they seem to find it accurate. As public intellectuals (of a sort), you’d think they’d understand that they may not be infallible: that perhaps after four years without Trump throwing a single journalist in jail, or setting up a single concentration camp, or rounding up a single political opponent, or starting a single war, or breaking a single law…. you’d think a reasonably reflective person might wonder whether their fears had been perhaps a wee bit overblown.

And you might also expect that men who have made a career out of expressing their opinions might have some respect for the right of other people to express theirs, even when they’re not opinions that Pierre Collignon and David Trads like. Even when they’re stupid opinions, or ugly opinions, or ridiculous opinions.

And you’d be wrong again.

But it would be a great boon to Western Civilization and Danish democracy if journalists could at least pretend to treat all speech equally, rather than applying one set of standards to the right and another (or no standards at all) to the left.