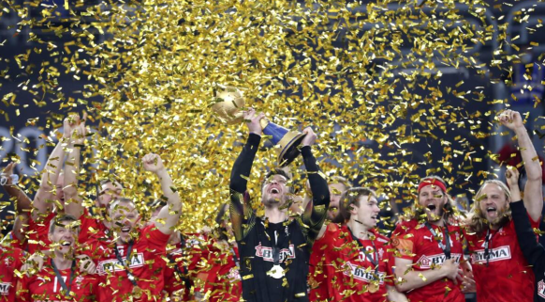 I had some other stuff queued up to write about today, but all of that has to be set aside. As everyone in Denmark and very few people in America know, the Danish national handball team defeated Sweden 26-24 last night in Cairo to win the world championship. (The US team qualified for the tournament but withdrew due to infections.) It was an especially significant accomplishment since Denmark had also won in 2019 and was therefore defending their title.

Handball is a sport I knew nothing about until moving to Denmark. I knew that Herself had played the sport throughout her childhood, and that she’d been good at it, and that many of her closest friends had been teammates.

I don’t think I understood how big part of her life it had been until the week of our wedding: her bachelorette party (which I obviously didn’t attend) began with what amounted to a reunion of most of her old team and a scrimmage of some sort (and ended with a marathon evening of drinking and dancing). Stories from her handball days filled the speeches given by her friends at our wedding reception.

So it’s no surprise that she nudged both our daughters’ natural love of sport toward handball. Both have been playing since they were quite young, and it’s been (and remains) a big part of their lives. Its absence during the lockdowns has been keenly felt.

We’ve had a massive handball net in our yard for more than half a decade. Our vacations and holidays are (in normal years) carefully synchronized with various handball tournaments around the country (and in Sweden). Herself is a “Handball Mom,” deeply immersed in the girls’ teams, often working the “judge’s desk” at home games, chauffeuring groups of girls to and from away games, sometimes even filling in as coach.

Handball has thereby become a big part of my own life. And I’m glad for it. I’ve never played the game myself, and I still get confused about some of the rules, but I understand it well enough to enjoy watching it.

And I am mystified that it never took hold in America.

For one thing, it’s pretty cheap: all you need is a ball, two nets, and a court. (Most Danish basketball courts double as a handball courts.) There’s no special equipment for the players: they need only shorts, jerseys, and a good pair of sneakers.

It’s a fast game with a lot of scoring.

It’s an intensely physical game: our girls often come home from their matches with scratches and bruises.

It’s a clocked game with time-outs, meaning it’s more television friendly than soccer: there’s ample space to squeeze in advertisements. And its two half hour halves mean that a whole game rarely takes longer than the first half of an NFL football game.

Cheap, fast, physical, tv-friendly, and short, with plenty of scoring and pretty simple rules: why is this not a more popular sport in America?

It wasn’t even offered at my own high school. That’s a shame, because I think I would have done better at handball than I did at baseball, football, or track. (The athletic feat for which I’m probably best remembered by my high school classmates is my having survived a shotput blow to the head.)

On the other hand, if I hadn’t played high school football I wouldn’t have had the knee injury that ended sports for me and drove me into theatre, which defined the trajectory of my adult life. And I’ve enjoyed and continue to enjoy my adult life.

So it’s probably just as well.

Having mentioned my daughters’ involvement in handball seems like decent opening to get into the differences between how kids’ sports are organized in America and Denmark.

In most American towns, there are “little leagues” and “pee-wee leagues” for most sports; they’re usually organized by age and limited to kids from the same community. From 6th or 7th grade onward, however, sports are organized by school. If you’re a very talented player attending a school with a lousy team, your only option is to change schools. Schools generally belong to geographically defined conferences and play the same towns year after year regardless of their relative strength or weakness.

In Denmark, the teams are just clubs: there’s no geographical or institutional requirement for membership. Most kids will play for their local club, especially in the early years, but there’s nothing to stop a kid from switching clubs if they want to, or for remaining on the same club even if they change schools. Additionally, Danish sports are organized in two-year age cohorts, so that kids alternate between being among the youngest and the eldest on their teams. This helps mitigate some of the unfair advantages enjoyed by kids born early in the year, as described by Malcolm Gladwell in Outliers. Danish sports clubs frequently have more than one team for each age cohort, along the lines of Varsity and JV teams (11 & 12 year old A team, 11 & 12 year old B team, etc). Placement tournaments at the start of each season ensure that seasonal play pits teams of similar ability against one another (although of course geography isn’t ignored entirely). It’s more equitable than America’s geographically determined conferences, but there’s something to be said for town rivalries.

I don’t see either system as inherently superior: both “work,” and each has its own advantages and disadvantages.

The American system is good for building school spirit, which is an important community building block, but it comes at the expense of competition: clubs that need to compete to draw the best players are obviously more concerned with the quality of their programs than high schools who merely have to offer their student body some extracurricular sports. (Private schools obviously can and do compete with one another’s athletics programs, but I’m speaking about the public system.) The geographically-defined conferences result in some very uneven games, but it also allows for the development of traditional rivalries.

The Danish system is good for offering choice and thereby encouraging competition between clubs to attract the best players (or to attract kids interested in the kind of club that emphasizes good sportsmanship and camaraderie over its won-loss record). It also offers kids an opportunity to form friendships outside of their own school. But the decoupling of sports from schools removes a valuable source of community spirit.

It’s interesting that the American system follows a more centrally administered model while the Danish system is more of a “free enterprise” approach. (On the other hand, the Danish system of “placing” teams based on strength creates more balanced league play, which is perfectly in synch with the Danish egalitarian streak.)

When Danish national teams win big championships (European or World), there’s ordinarily a big celebrational rally in Copenhagen’s Rådhusplads. Tens of thousands of fans flood the square, most of them bedecked in red-and-white, many of them waving Danish flags. The players come out on City Hall’s big balcony and address the adoring crowd, who in turn, well, adore them.

That’s obviously not going to happen this year, and I think that’s a shame. Not because I would have liked to go and show my support—I’ve always hated being in crowds of any kind, and rallies in particular—but because I love seeing a country come together on something positive.

So I’ll follow all the silly stuff live (Mikkel Hansen just got off the plane while I wrote this!), in whatever form the guldfejring may take in these stupid, stupid times.