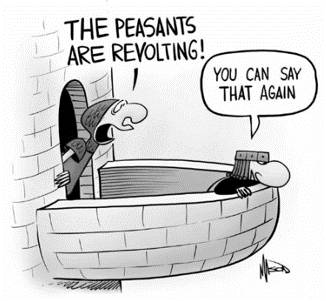 Prime Minister Mette Frederiksen (S) came on television two nights ago, flanked by the usual panel of socially distanced ministers, to tell us all we couldn’t go to school or work or restaurants or cafés or play sports or go out to movies or concerts or plays for at least an extra three weeks. And that the border and travel restrictions would be extended also. The hardcore lockdown that began in early December (following the moderate lockdown that had begun in October) has been extended through the end of February. That’s just eleven days shy of the first anniversary of our first lockdown.

All the metrics have been declining nicely, she explained, but the British mutation is spreading much more rapidly than the original Wuhan virus, and represents a larger and larger share of all new cases every week. So even though the number of new cases is going down, the rising infection rates from this mutation are troubling enough that we can’t even think about being free people again until March.

According to DR, Statens Serum Institut Director Henrik Ullum says that “one of the greatest arguments for maintaining the lockdown” is the excess mortality of 1,000 that we’ve seen in Denmark.

Excess mortality in Denmark during the 2017/2018 flu season was substantially higher than that, and over a much shorter period.

Ullum also said that there are signs the British variant is not only more infectious, but also more deadly.

“However,” DR notes drily, “this has not yet been confirmed.”

A lot of things haven’t been confirmed, among them the real efficacy of massive lockdowns. But DR doesn’t note that.

On Friday, the day after Mette Frederiksen’s extension of our current (fairly draconian) lockdown, things took an awkward turn for the Prime Minister. Here’s a summary from Berlingske, published earlier today:

Critique from Members of Parliament after Corona Report: “Mette Frederiksen lied to Danes and to Parliament”, Christina Elkorn, Berlingske.dk, 30 January

We now discover that when the Prime Minister told us, in her March 11 address to the nation declaring lockdown 1.0, that the lockdown was endorsed by “the (health) authorities,” she was lying. The authorities had not recommended a lockdown. The decision was entirely political. This is now established fact, thanks to a 600-page report published out of Aarhus University that emerged on Friday.

As the headline suggests, the PM has come in for some sharp criticism from many sources. Friday evening she issued a written statement that’s described in the article. Here’s the original Danish, followed by my own translation:

In a written statement Friday evening, Mette Frederiksen declared herself “impressed” that with the report one “is able to look back and learn from the course we’ve been through up until now.”

“The government has at no time wished to hide behind the authorities or rid itself of responsibility for the lockdown,” wrote the Prime Minister:

“We have repeatedly stressed that the government’s decisions were an expression of a political decision. That the government had adopted a cautionary principle. That we would rather do too much than too little. And rather act too swiftly than too slowly. I have no doubt that it’s contributed to Denmark being among the countries that came best through the first wave of the corona pandemic.”

That she lied to Parliament and the Danish people on March 11 is quite clear.

That she did it because she cared so much is irrelevant: she called for the closing of our borders, our schools, our restaurants and cafés, our small businesses, and she justified it all with a lie.

That she “has no doubt” our lockdown got us through the first wave so well is also irrelevant: her own beliefs are unimportant, and even if the spring lockdown contributed to a better “first wave” than was experienced in other countries, the excellence of its handling can surely be called into question when it was followed by second and third waves requiring second and third lockdowns.

Denmark is perenially ranked among the least corrupt countries in the world, often the least corrupt. This redounds to its benefit in many ways, not least in that Danish citizens can safely trust authority to an extent that citizens of other countries cannot. That has an obvious downside, however, as Kristian Thulesen Dahl, chairman of the Dansk Folkeparti points out in a tweet cited by the Berlingske article:

Especially in connection with a pandemic, it is critical that the Danish people can trust that what the government and authorities are saying is true.

I’m not a big fan of DF or Thulesen Dahl, but his statement is spot on. Danes’ trust in government is an expensive thing to gamble away on an unnecessary lie, and this was indeed unnecessary:

Ole Birk Olesen is the group chairman for Liberal Alliance (an opposition party), and says: “Mette Frederiksen could have said ‘The authorities aren’t recommending a lockdown, but we’re being more cautious, so we implore Parliament to support a lockdown.’ Instead she lied. Why? My guess is that she’s not too particular about speaking the truth. She just wants a good show.”

It was clever of our governments to go all-in at the outset by shocking us almost senseless with the most severe restrictions on our liberty that any westerner alive today had ever experienced. We went overnight from public service announcements that encouraged social distancing and hand-washing to border closures, travel bans, shuttered schools, transportation shutdowns, and immediate and arbitrary limits on where we could go, whom we could see, how (and whether) we could work, and even how many people could gather in public.

And we took it.

We took it because we’re all basically decent people—and we’ve all got an instinct for self-preservation. We were being inundated with apocalyptic footage and dire warnings of millions of deaths.

“Experts” came out of the woodwork with their handy-dandy charts showing a scary red curve and a reassuring green curve. All we had to do was flatten the curve. Easy-peasy. Bada bing. Suck it up for grandma. We’ll get through it together by staying apart. Yay team!

We no longer live in a world that would have been recognizable just 15 months ago to anyone but the most paranoid of lunatics in the tinniest of the tin-foil hats.

And we’ve been stunned into a kind of sleepy torpor.

And instead of saying, “Wait a minute, you incompetent fucks, the whole reason we’ve gone along with destroying our economies and fucking up our children’s educations and piling up unimaginable debt and killing our social lives and hunkering down like frightened rabbits in our homes (that many of us can no longer afford thanks to the jobs we lost in the industries you killed), the whole reason we put up with all that was to prevent overloaded hospitals and piles of dead people, but now you say you need to fuck us harder and longer because none of the other stuff worked? The stuff you said we had to do because it would work?”—

Instead of saying that, or anything like that, we sigh and we shrug.

As Danes like to say, er det klogt? Is that wise?

This virus is deadly but, as deadly viruses go, it’s actually pretty particular. It goes primarily for the very old and the very sick. Those aren’t hidden traits. They’re not secrets.

Wouldn’t it be smarter (cheaper, less disruptive) to focus our efforts on protecting the very old and the very sick, instead of shutting our entire civilization down? Wouldn’t that be better for everyone, all the way around?

“But Greg, it isn’t only the very old and the very sick who die of the Wuhan Virus and its British, South African, and Brazilian variants. Younger, healthier people are not immune!”

That’s true. They’re not. Nor are they immune from death in the best of times. Seasonal flus kill much more indiscriminately than this virus does: they kill infants and toddlers and grade schoolers and teens.

What if we locked down the very old and very sick and opened up our world again? What if instead of spending trillions we don’t have trying to keep the world afloat while it’s mostly under house arrest, we merely spent billions ensuring that the most vulnerable were kept safe while everyone else was merely asked to scale their own behavior to their own tolerance for risk?

Is no one at all troubled by the indifference with which we have handed away all liberty and responsibility?

I don’t claim to have the answers, but I have a lot of questions, and I’m tired of having them all be answered with variants of “shush, child, let the wise ones take care of you.”

A year ago today, the wise ones were telling us that worrying about the Wuhan virus was racist and xenophobic. Months later they were telling us that Donald Trump was insane for suggesting a vaccine could be available before 2022 at the earliest. The wise ones were giving Andrew Cuomo tongue baths for his heroic leadership, even while that wise one was hushing up the death toll of his most disastrous policy.

So the wise ones can eat a cold bowl of fuck, as far as I’m concerned.

They can have my respect and deference when they earn it.

You nailed it on this one. That was what Sweden basically was trying to do, although too little too late for thousands of people there. From the perspective of someone living in the US, only catching a government leader in one big lie about the pandemic is quite amusing, given the 30,000+ documented by the previous POTUS, and the now 400,000+ deaths here–a number significantly exacerbated by many of those lies and obfuscations.

Mette Frederiksen didn’t lie about the pandemic, she lied about the basis for her decision to shut the country down. (And she crushed an entire industry without any actual authority to do so, but that’s a separate issue.)

I’m not sure which lies and obfuscations exacerbated the American death toll, especially in light of our federalist system, but I do think Biden’s January 22 statement that “There’s nothing we can do to change the trajectory of the pandemic in the next several months” is interesting. Is that because the villainous Trump set things up so deviously that there’s nothing Biden can do about it (after vowing repeatedly on the campaign trail that he could and would)? Or is it because Joe Biden was lying on the campaign trail? Or is it perhaps that there’s not much any American president can actually do about it, beyond assisting the states that ask for assistance? (And creating a framework that would allow the fastest development of a vaccination in the history of the world?)

But truly, if there’s nothing that can be done to change the trajectory, what’s the point of the lockdowns, or Biden’s own mask mandate? Sort of a stupid message to put out there, isn’t it?