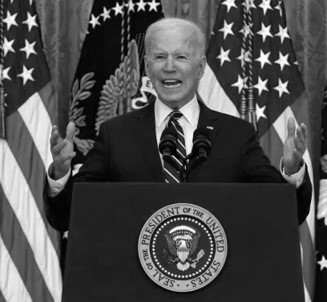 Last night Joe Biden finally had an opportunity to showcase his vision to America and the world.

It was the longest an incoming president had gone without a press conference in a hundred years.

Anticipation was high. Expectations were low.

Danish media haven’t made a very big deal out of it.

Analysis: Biden’s first press conference was supposed to be a victory lap — but something serious got in the way, Michael Bjerre, Berlingske.dk, March 25

DR and Berlingske, I should note, often dedicated practically their entire home pages to articles about Trump, even on days without a press conference. And they called on their leftist Professors of Americanology to parse every word and gesture. I’ve chronicled that. Browse the archives.

A new American president gives his first press conference as such, long after the point at which such a thing is traditionally expected, and we get a couple of dry little articles tucked away into the daily news stream.

And they make no mention of some of the more interesting observations a critical observer couldn’t help making:

He had his nose in a binder for much of the conference, and many of his answers were read directly from its prepared texts.

He sometimes got so angry about what he was saying that he yelled into the microphones. Shouted.

Shrugging your shoulders and trusting to fate is what you expect from a surf bum or a college freshman, not the executive and commander in chief of the wealthiest and most powerful nation on earth. But whatever, man, it’s all good.

He lost his train of thought several times and took some uncomfortable pauses to shuffle through his binder.

He said at one point, “And so I’m going to say something outrageous. I’ve never been particularly poor at calculating how to get things done in the United States Senate. So the best way to get something done, if you hold near and dear to you that you like to be able to (uncomfortably long pause)… Anyway, we’re ready to get a lot done. And if we have to, if there’s complete lockdown and chaos as a consequence of the filibuster, then we’ll have to go beyond what I’m talking about. Okay. Hang on. Sorry. Oh.”

That’s straight from the transcript.

As bad as it reads, it was even worse in real time. If you want to pretend his mind isn’t slipping, here’s a concise paraphrase of the logic behind that rhetorical potpourri: “The best way to get something done is to get ready to get a lot done, and if you have to, then you have to go beyond what you’re talking about.”

No wonder he can’t plan three-and-a-half years in advance.

He said he’d been a senator for 120 years. Only a mild exaggeration, so I’ll give him a pass.

He said that the Dread Tyrant Trump had allowed children to starve to death on the Mexican side of the border.

Pretty emphatic: Joe Biden is not going to let children starve to death on the other side of the border, like Trump did.

The new civility is delightful.

He said that efforts to ensure voter integrity by requiring voter ID (something required in most of the western democracies) “make Jim Crow look like Jim Eagle.”

Australia, Canada, Germany, France, England, Sweden, Norway: all worse than Jim Crow. Sick. Sick. The hell with you all.

Joe Biden worries about this because Joe Biden believes that minorities don’t have the sense or the money to get identification, or the wherewithal to figure out how to use the internet.

Roughly 75% of Americans support requiring identification to cast a ballot, including 69% of black Americans.

He said that “help is here, and hope is on the way,” which is bad enough on its own, except he read it from his notes.

At one point he wandered away from the podium for no apparent reason, meandered around a bit, then wandered back. He did that on his own, with no help from his wife or the vice-president, so that’s probably going to work in his favor.

He assured reporters they would be permitted to view the notorious holding facilities “once we get this thing moving.” Asked then that would be: “I don’t know, to be clear.”

I get that a lot from Youngest:

“Honey, did you clean your room?”

“Not til I’m done cleaning it.”

“When will that be?”

Youngest is twelve years old. JoeBiden is 78. She’s in sixth grade and never promised the American people that she would be honest and transparent with us about everything.

Anyone pleased with Joe Biden’s performance last night no longer gives a damn about the United States.

Or about Joe Biden himself.

If Joe Biden was your grandfather, you’d think, “Whew, I was nervous there a couple of times, but the old fella actually made it through. Let’s hope he never has to do that again!”

But Joe Biden is not your grandfather.

He’s the President of the United States.