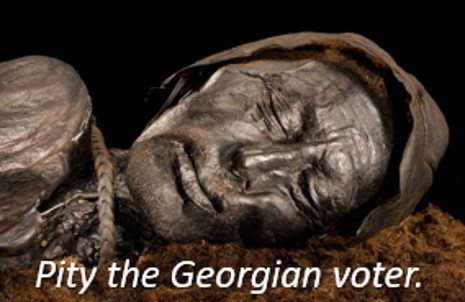 “Imagine,” Louise Brodthagen Jensen asks, “standing in line for many hours to vote. You’d obviously put a pretty high premium on volunteers coming with food and drink so that you can last until you get your fingers on a ballot.”

“But in the U.S. state of Georgia, handing out free food and drinks to people in voting queues is now forbidden.”

Jensen is, like most journalists these days, trying to hook your emotions before you’ve had a chance to get your intellect engaged. She’s not doing it to capture your interest, but your opinion.

Why DR news journalists feel compelled to swing the Danish public behind the American left is something I’ve struggled for years to understand. It’s one of the reasons I started this blog.

Louise Brodthagen Jensen—let’s call her LBJ to minimize the likelihood of my misspelling her name at some point—is writing an article about Georgia’s passage on Thusrday of election law reforms that Republicans support and Democrats oppose.

LBJ doesn’t want to get bogged down in all that, however. Too complicated. Too messy. Easier to adopt the Democratic position as the objectively correct one, accept all Democratic talking points at face value, and make an emotional appeal to Danish readers.

If that sounds like conservative sour grapes, that’s because some of it is. I’m exhausted by the routine classification by taxpayer-funded DR of all American news into a Manichaean framing of Good Democrats versus Bad Republicans.

Dear Danish readers: there is a species of American jurisprudence referred to as “electioneering law” that relates to what can and can’t be done within a particular distance of a polling place. (Electioneering is simply an act promoting a political cause or candidate.) These laws are ubiquitous, in conservative and progressive states alike.

The National Conference of State Legislatures (NCSL) has dedicated an entire portion of their website to electioneering prohibitions around the nation.

In ultra-progressive California, for example, the following activities are illegal within 100 feet of a polling place:

The verb “loiter” is defined by Oxford as “stand or wait around without apparent purpose.” There are many laws against loitering in American states, cities, and villages. Not because American legislators at every level believe every American must always be moving with purpose, but because people hanging around for no apparent reason are often (but not always!) up to no good.

With respect to polling places, it seems unproblematic to assume that anyone milling around within about 30 meters of a polling station could easily do their milling a little further away as insurance against their actually having a purpose: the purpose of electioneering. Which they are welcome to do 31 meters away from the polling place.

Within the area between the polling place and the small U.S. flags placed on the thoroughfares and walkways leading to the polling place, and if the line of electors waiting to vote extends beyond those small flags, within 10 ft. of any elector in line. Flags are placed 100 ft. from the polling place.

Why do so many states prohibit loitering around polling lines? Because most people doing so aren’t really loitering: they have a purpose, and the purpose is to influence votes, which is precisely what they’re not supposed to be doing that close to the polling place.

They could also be entirely innocent and apolitical do-gooders who just want to be sure no one dies of starvation (like the kids Trump let starve on the Mexcian side of the U.S. border) or passes out from hunger or dehydration while waiting in line.

Or they could be hard-core partisans handing out a little last-minute voting advice along with their spring water and granola bars.

Hard to tell those people apart, so where’s the harm in saying: “you can set up your water and granola stand 31 meters away from the line, but no closer!”

Now let’s rewind for a moment to remember how LBJ opens her article:

“But in the U.S. state of Georgia, handing out free food and drinks to people in voting queues is now forbidden.”

Does anyone really consider that intellectually honest?

And as long as we’re discussing intellectual honesty, here are the arguments the journalist LBJ provides in defense of the law:

Those are the arguments she presents in favor of the law. That’s it.

Here are the arguments she presents against the law (beyond her own emotional appeal in the article’s first few paragraphs):

Nowhere in the article does LBJ point out that voting across all fifty states is currently much easier than it is in Denmark.

Nowhere does she explain the difference between absentee voting (similar to what we have in Denmark, although much easier) and mail-in voting, in which the state just cranks out ballots to every residential address without regard to eligibility requirements.

Nowhere does she point out that requiring identification to vote is commonplace in the western democracies: that Denmark is itself surrounded by countries that require it (Norway, Sweden, and Germany all do), and that even Denmark’s own registration cards are themselves a more stringent kind of identity check than any found in many American states.

Never does she think to observe that by the standards of Stacy Abrams, Joe Biden, the Brennan Center, Alex Wan, Rhonda Burnough, and even Barack Obama (whom she does not quote, but has also compared the Georgia law and other like it as “the new Jim Crow”), by all of their standards, Danish voting laws are “suppressive.” As are those of Australia, Canada, Northern Ireland, Norway, Sweden, France, Germany, Iceland Switzerland, Mexico, Israel… you get the point.

An inquiring mind might wonder whether critics of voter ID and other election integrity laws in America are truly “the new Jim Crow” when in most cases they’d simply bring American voting laws in line with the western mainstream.

But an inquiring mind would not last long at DR.

With all that behind us, let’s cleanse our palates with something nice about Georgia.