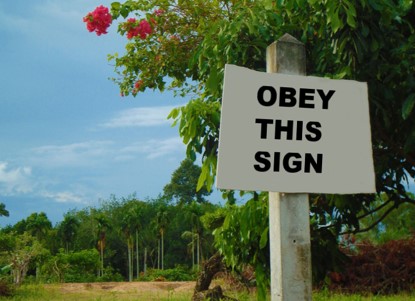 I was walking Dog down by the lake yesterday when I crossed paths with a couple of teenaged boys. They’d been walking towards me but had stopped at a sign that had been up so long I’d stopped seeing it. They were looking it over and talking about it as Dog and I strolled by them.

I didn’t catch what they were saying, but I was smiling inside in anticipation of what they’d do.

It’s a “one-way” sign. It’s got a giant arrow and it tells people to go only that way (which happens to be counterclockwise) around the lake.

The headline of the text says “Smitten stiger i vores kommune” in big, bold letters. It means: “Infections are rising in our kommune.” (The sign actually names our kommune, but I’m omitting the name to make it just a little harder for internet stalkers to find and kill me.) Beneath that headline there’s additional text to explain the importance of going only one way around the lake. And then, of course, there are the usual hieroglyphs reminding us to keep our distance, wash our hands, and cough into out forearms.

I was startled by the signs when they first appeared around our lake last spring, then I got used to them, then I stopped seeing them altogether. They came down at some point last summer, then went up again in the early fall. Infections in our kommune have been steadily decreasing since December.

The new one-way directionality of the path never really affected me: I’ve always been a counterclockwise kind of guy when walking Dog, because that’s just how I roll. I take our neighborhood path down to the lake and turn right. That’s the counterclockwise direction. I’ve always gone that way because it gives me the most options to cut back up from the lake to the streets, which I then follow back home. And if I’m just out for a long walk around the lake, or biking around with my girls, that’s still the better direction because it gets us out into nature faster.

So everyone in the neighborhood ignores the directionality of the lake path when going down for a swim. I interpret that as a sign of good mental hygiene. It’s good to live among sensible people.

But instead of erupting into laughter, or throwing rocks at the sign, or yelling profanities at it, or just shrugging and continuing their rebellious clockwise stroll on a lakefront path zoned only for counterclockwise walking, the boys did something I never could have dreamed of doing at their age: they turned around and began walking my way, counterclockwise.

A sign whose headline, I remind you, was a lie: infections have not been rising in our kommune since December. I don’t think they’ve been rising anywhere in Denmark, with the exception of a few particular hot spots, for months.

These were obviously decent kids who didn’t want to murder anyone’s grandmother by walking around the lake in a thoughtless and cruel direction.

And if teenagers aren’t going to call bullshit on baseless authority, who is?

There was never a good reason to ask the citizens of our kommune to walk counterclockwise around our lake. Even when infections were rocketing upward. There has never been any science of any kind to suggest that this virus could spread between human beings passing one another outdoors on a broad path. Asking us to submit to this arbitrary rule was always an abuse of our good nature.

I suppose it’s hypothetically possible that an infected person who’s in the middle of a massive coughing or sneezing fit, or belting out operatic airs, or yodeling, could infect a passerby who happened to be in the middle of a massive yawn at just the right moment, and angle, and for just the right amount of time. I also suspect that the odds of such a transmission actually occurring are infinitesimal. Besides, passing someone going in the same direction as you takes much longer than passing someone going in the opposite direction, meaning you’re at a higher risk of breathing in more of their exhalations for a longer period of time.

The signs were understandable in the spring of 2020, when there were still a million questions about the virus and the watchword was “better safe than sorry.” (Or, “Keep calm and PANIC!”)

Today those signs are an affront to our dignity.

Yes, there is still such a thing as dignity, and yes, it can still be affronted. And yes, that matters.

It’s depressing to think of the docility that this pandemic has been impressing on people.

“No,” say our experts, “people are too stupid. We can’t trust them to take responsibility for their own lives. They’ll get us all killed. We need to tell them what to do, or they’ll end up jeopardizing our lives by walking around the lakes in all kinds of crazy directions.”

And we let them.

We all laugh at the stories of people who drove into ditches or lakes or cornfields because their GPS said “turn here now.”

But aren’t we all those people now?