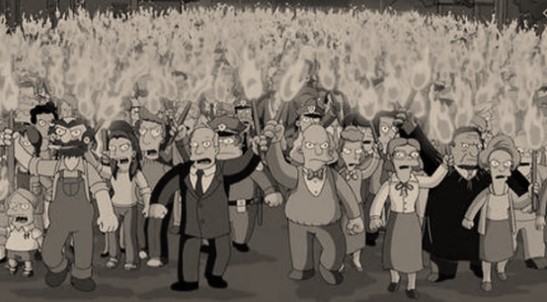 Berlingske.dk put out another piece of American leftwing agitprop today.

It gets off to a rough start with a confusing headline:

Blacks raging over charge against officer: “He was brutally murdered.”

The brutally murdered “he” was of course Daunte Wright; the charged officer was Kim Potter, the officer who shot and killed him. The headline could easily be misread as suggesting that it was the officer who’d been murdered.

That Wright was “brutally murdered” is in quotation marks because it’s not a statement of fact but something said by the Wright family lawyer.

In fact, we don’t know whether Wright was murdered. We only know that Kim Potter pulled the trigger on the gun that fired the bullet that killed him.

Yes, she killed him, but whether or not it was murder is for a jury (or a judge) to decide. Most likely they won’t decide it was murder, because the charge against Kim Potter is not murder but second-degree manslaughter, as the article notes.

That’s why the Wright family lawyer is insisting Daunte was brutally murdered: in fact, the lawyer (whose gender is just as well kept a secret in this article as his or her name) went so far as to call what happened an execution. Berlingske cites the lawyer as saying:

“It wasn’t random. This was an intentional, deliberate, and illegal use of force. An officer of 26 years can tell the difference between a stun gun and a firearm. Kim Potter executed Daunte for what was just a minor traffic offense,” the lawyer stated.

The citation I just quoted is supported by a link over the words “the lawyer stated.” That link leads to a Guardian article that makes no reference to the lawyer or the citation.

The article states some of the facts of the case, but its emphasis is on the anger aroused by the episode, as the headline demonstrates.

It practically revels in it.

I understand anger when someone is killed, but three things in particular bothered me about this article.

First, it nowhere mentions that Daunte Wright was resisting arrest and attempting to flee the scene. As I wrote yesterday, that’s no justification to kill, but much of the outrage being expressed seems to be based on the notion that, as the mysteriously anonymous family lawyer suggested, Daunte Wright was deliberately executed by Kim Potter during a routine traffic stop.

Had it been routine, Daunte Wright would be alive today.

It was Daunte Wright that brought chaos into the situation by resisting arrest and attempting to flee. The bodycam footage is available online if you’ve got the stomach for that kind of thing.

You may wonder why Daunte Wright would be handcuffed during a routine traffic stop. That doesn’t, after all, seem very routine.

Daunte Wright obviously knew all that, and the officers on the scene had also been informed of it.

That’s called context, and it matters.

My second concern arises from the following passage:

Kim Potter was put on leave after the episode but resigned two days after her dismissal. Police Chief Tim Gannon has also filed his resignation in the wake of Wright’s death, which he called “a mistake.”

The Chief of Police called the death a “mistake” and was therefore relieved of duty. Not mentioned at all: the city manager, Curt Boganey, was fired after having disagreed with the mayor’s insistence that Kim Potter should be fired immediately:

“All employees working for the city of Brooklyn Center are entitled to due process with respect to discipline,” he said.

The mayor clearly objected to the idea of due process, so Boganey had to go.

(Boganey, I’m sad to feel compelled to note, is black. So is the mayor.)

So the Chief of Police lost his job for calling the shooting a mistake and the City Manager was fired for suggesting that due process was an actual thing.

Rule of law is being swept away by emotion. That never, ever ends well. Ever. Anywhere. You could look it up.

My third concern is one I’ve written about before: the article quotes several tweets, and even embeds a few, from people whose connection to the episode isn’t explained. Most of whom don’t even have the coveted “blue checkmark.”

At one point, the article just paraphrases whole clusters of tweeting strangers (my emphasis):

Others think that Kim Potter shouldn’t be allowed to carry weapons any more, and that the charge for negligent manslaughter is much too mild. She should be locked up and accused of murder, several wrote on Twitter.

Who are they, where are they from, what’s their connection to the case, what authority do their voices bring to bear upon the circumstances? Has Berlingske verified they’re not Russian bots, or Chinese hackers, or bored Belgians?

You know the answer to all of those questions as well as I do. “Journalist” Kalinka Aaman Agger, who wrote this article, doesn’t consider them relevant.

Lastly, what all public discussion of the issue seems to be missing is a sense of proportion, so let’s go back to the stats.

In 2018 (the last year for which I can find authoritative stats), there were 3,393,000 “police-initiated contacts” with black Americans (see Table 1 of this report from the Department of Justice). There were also about 3.2 million “citizen-initiated contacts,” but we won’t even count those.

Assuming the number of contacts was roughly similar in 2019, then 14 out of 3.393 million police-initiated contacts with black Americans resulted in a fatal shooting.

Four ten-thousandths of a percent.

Think of that when you read articles like this one… or when you see tweets like this:

Not In My Back Yard
1.4 million EU citizens want to drop caged hens
DR.dk, April 15

Listen to Your Experts
Expert on continued school closings: “It’s not intended that we get children who can’t speak Danish on account of Corona.”
Berlingske, April 15

News Prisoners Can Use
Kurdish Vice President in Syria warns: “If prisoners succeed in escaping, they can end up in Europe”
DR.dk, April 15

Good, It’s Getting Crazy Down Here
The British philosopher Philip Goff has found a new place for man in the universe
Information.dk, April 15