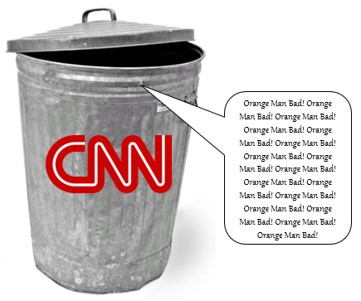 In a headline item yesterday I linked to a B.T. story about the Project Veritas videos released earlier in the week that had revealed a CNN technical director bragging about the many ways in which the network actively, deliberately, and aggressively misled their viewers to damage Donald Trump, support Joe Biden, and steer the national agenda.

(I ought to have mentioned how pleased I was to see that coverage in any Danish outlet, but that’s not what the headline items are about.)

I very strongly recommend that you watch all three. It takes about 25 minutes to get through them, but it’s time well spent.

The magnitude of this story is hard to overstate, so let’s say it again: a news network actively, deliberately, and aggressively misled their viewers to influence an American election (among other things).

If you continue watching CNN, you’re either a sucker or an idiot, and quite likely both. They’ve always been playing you: now you know they’re playing you. They’re even proud of it (although one can sometimes discern a glimmer of shame emanating from poor old Charlie Chester).

It may be the case that you think the Dread Tyrant Trump was such a uniquely terrible threat to the American public that CNN was doing the right thing: you may think these were noble lies. You’re entitled to that opinion, but I’d be just as entitled (and even more justified) to call you an ass and an idiot.

Because they were lies parading as news. Which means the data you were using to assess the threat posed by the Dread Tyrant Trump had no basis in reality. It was all the product of the fevered imaginations at CNN (and their confederates throughout the establishment media). If Trump was as wicked as they insisted (and as they continue to insist), why bother lying? Why push news that wasn’t actually true?

“News that isn’t actually true” is an inelegant formulation. Let me see if I can think of another way of describing news that isn’t true. How about Fake news?

Charlie Chester is acknowledging that CNN is in fact fake news.

Think back to all the times Jim Acosta puffed up his chest and posed as someone “speaking truth to power,” when all he was doing was knowingly spewing partisan sputum through a mask of self-righteousness. Think of all the grotesque and hideous ways in which CNN promoted the sexual predator and scourge of nursing homes Andrew Cuomo throughout most of 2020. Think of all the drooling inanities and foam-flecked philippics from the likes of Don Lemon, Chris Cuomo, and Kate Bolduan. How they defended the Marxists and anarchists smashing and burning American livelihoods, and physically assaulting their fellow Americans, as “mostly peaceful.” None of it was real. It was, as Charlie Chester acknowledges, pure propaganda.

As you’d expect, James O’Keefe is now being hailed as hero throughout the establishment media for bringing all this to light, enabling them to reform their ways and wipe this stain from their reputation.

Just kidding: Twitter permanently banned him, and the establishment media have circled the wagons: if you search for “James O’Keefe, Project Veritas, and CNN” on Google, you get a bunch of results from Fox, the New York Post, the Washington Examiner, and other right-leaning outlets. Directing the search directly at the New York Times (exact search string: “nytimes.com: james o’keefe project veritas cnn”) produces only old stories attacking O’Keefe for doing exactly the kind of thing that made Michael Moore’s career. You’ll get the same type of results for a search pointed at the Washington Post. The MSNBC search produces nothing of relevance at all.

Curious, is it not?

The establishment media (including CNN) spent weeks last fall, not long before the election, pushing a story about Trump trash-talking the young men who’d died storming the beaches of Normandy in 1944. We were told he’d called them “losers” and “suckers.” Not a single named source was ever provided by any of the many, many media outfits that ran with and trumpeted the story. Nor was any audio, video, or transcript of the remarks ever provided.

Project Veritas has, on the other hand, provided authentic video of a CNN employee bragging about the many ways in which that “news” organization was focused on (among other things) getting Trump out of office: the lies and misrepresentations and propaganda.

So Project Veritas and James O’Keefe must of course be ignored and silenced.

Because that’s how journalism works.

Party Poopers
Police are asking people to stay home: Do not show up for the Queen’s birthday
BT.dk, April 16

I Can Think of Some Other Alternatives
Don’t use the term mistress for a woman who is in a long-term sexual relationship with, and is financially supported by, a man who is married to someone else. Instead, use an alternative like companion, friend or lover on first reference and provide additional details later.
AP Stylebook tweet, April 13

Where Was the Last Place You Saw Them?
2.5 billion Tyranosaures rexes have lived on earth: Why have we only found 40 skeletons?
DR.dk, April 16

But Whose House Will Be Headlining?
HC Andersen’s House to open this summer
CPHPost.dk, April 15

Someone Set Us Up the Bomb
Danes stormed to hairdressers this week – now there’s a new “rebound of dimensions on the way”
Berlingske.dk, April 16

Slow News Days (But It Sounds Like We’re Already There)
Here are the plans: Steak Tatar, happy hour, and Korean lessons – What are you looking most forward to when Denmark opens?
Jyllands-Posten.dk, April 16

Define “Good”
Camilla drinks her own pee in the wild: But is it actually a good idea?
DR.dk, April 16

Not If “The Paper” Runs
Campaign Trail: Will “The Rock” be America’s Next President?
Berlingske.dk, April 16