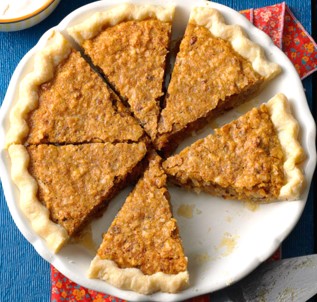 Note: Due to the long holiday weekend, AmerikanskeTilstande won’t be posting again until Monday, May 17.

Let’s say you’ve been hosting a dinner party for nine. It’s time for dessert. You’re going to be serving pie.

And let’s say your nine guests are unusually particular about how much pie they can eat. They all want some, but if any individual’s slice is too big or too small, it could kill them. Or they might kill you in a blind rage. Either way, you need to get each slice just right.

Your guests, by the way, are not only highly sensitive about pie consumption; they also have a very strict hierarchy. They must be served in order, one at a time, or they will begin attacking one another before turning on you.

Your first guest steps toward you.

And so you very carefully cut out a single slice of the pie corresponding to roughly 8½% of its mass, remove it from the tin, and serve it to your guest.

The next guest steps forward.

And so it goes, until only one 27th of the original pie remains.

But wait—you served the wrong pie! You just gave each of your sensitive, hierarchical, and extraordinarily violent guests a slice of arsenic pie! You big dummy, you were supposed to be serving them the apple pie.

Fortunately they are all very polite, so none had yet begun to eat because not everyone had yet been served. (You had not yet carved out your own 1/43rd.)

You recall the slices at once, and as each guest returns their slice you return it to the tin.

You then repeat the serving exercise with the apple pie, and everyone is satisfied. Finally your guests go home.

The next morning you notice one of your children eyeing the arsenic pie.

“Don’t eat it,” you say, “that’s the arsenic pie. It’s incredibly poisonous and you’ll die after just one bite.”

“If it’s a poison pie, why did you cut it into ten slices?” the kid asks.

“Foolish child!” you exclaim. “I did no such thing!”

“Ah,” you say, “I can see your error. There are nine slices, and then there’s the rest of the pie.”

The child furrows her brow. (It’s a girl.)

You explain to her about your peculiar guests, and all the slicing, and how because you yourself had not yet carved out your own slice (and hadn’t intended to set any aside for your child, or for your spouse who was away in Iceland on business), that one particular sliver is in fact merely the remaining 27th of the pie and was therefore by no means a slice, but just leftover pie.

Your daughter is skeptical.

“No one’s going to eat a stupid arsenic pie,” she says. “So none of that matters. There are ten slices. I could just as easily say that this slice is the rest of the pie, or that slice, or that one.”

“That may be,” you explain to the idiot child, “but each slice was carved out for a very particular guest, except for the last one. It was just left over. I was gonna cut my own slice out of it. It is therefore the rest of the pie.”

Things escalate rapidly but fortunately your spouse arrives home from Iceland before they take an ugly turn.

That’s our thought experiment. Succinctly: how much of the pie can be removed before what’s left is no longer “the remains of the pie” but is instead “the last slice?”

How many slices of the population pie can you carve out for special consideration before you no longer have a pie, but a collection of slices that are every bit as particular, quarrelsome, hierarchical, and violent as those imaginary dinner guests?

Maybe the pie analogy doesn’t work for you.

In that case, visualize a borderless map of the European continent. Now draw the borders of every country except Switzerland. The map is now indistinguishable from a map of Europe that includes the Swiss borders, because Switzerland is defined as much by its exclusion from other territories as it is by sovereignty over its own.

It’s tautological: the Swiss territory consists of all territory that is not part of the territories that aren’t Swiss.

This is just math, and it’s simple math: every object can be defined with equal precision as the thing itself, or as what’s left in the absence of all things that are not itself.

Ten minus eight is two; two plus eight is ten. Coloring eight-tenths of a pie identifies the remaining two-tenths just as plainly as coloring in the two-tenths itself. Gertrude Stein said some interesting stuff on this topic somewhere: about how you can paint a chair by painting everything except the chair. Artists and architects call the concept “negative space.” So even if there were never a Switzerland, never a Swiss people or culture, it would nevertheless have been called into existence by the mere fact of the countries around it creating their borders.

My point is that there never was a significant bloc of straight, white, men identifying as a group in America, and to the best of my knowledge there still isn’t. (I said significant, in case you kids in the back row missed it.) But if every group that is anything but straight, white, and male is going to hoist its own flag and declare itself deserving of special consideration by everyone else, those groups will in fact have created such a group by default and America will have become fully Balkanized.

America needs to get its pie back together.

That’s not Latin for “out of one pie, many slices.”