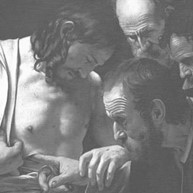 There’s a passage from G.K. Chesterton’s Heretics (1905) that I’ve cited a few times on this blog.

It’s a typically playful Chestertonian spin on a bit of the Gospel, specifically John 20:29, but since most of us aren’t as fluent in scripture as Chesterton’s readers were back in the day, let’s refresh:

Jesus saith unto him, Thomas, because thou hast seen me, thou hast believed: blessed are they that have not seen, and yet have believed.

That would be the Thomas we refer to as “Doubting Thomas,” and Jesus’ point there is pretty straightforward: Thomas, you moron, you only believe in me because I’m right here and all in your face, and I let you stick your stupid fingers into the nail holes in my hands: it’s the people who haven’t seen me but still believe in me who have the faith.

Hence the standard formulation: “they that have not seen, and yet have believed.”

Chesterton loved turning standard formulation upside-down, or inside-out, or both. The inversion of that formulation was therefore standard operating procedure for the incorrigibly merry Chesterton. But his larger observation was actually quite pointed, and more than a little prophetic.

Already back in 1905, Chesterton saw what modernity was doing to the world. He opens Heretics by ridiculing the fashionable affectation of declaring oneself a heretic: “The Bohemian, with a red tie, ought to pique himself on his orthodoxy. The dynamiter, laying a bomb, ought to feel that, whatever else he is, at least he is orthodox.”

It isn’t just semantics. It’s a profound observation and it’s a fascinating lens through which to scrutinize the modern era.

The passage I keep coming back to is in fact the closing passage of the book. Here it is:

We who are Liberals once held Liberalism lightly as a truism. Now it has been disputed, and we hold it fiercely as a faith.

The great march of mental destruction will go on. Everything will be denied. Everything will become a creed. It is a reasonable position to deny the stones in the street; it will be a religious dogma to assert them. It is a rational thesis that we are all in a dream; it will be a mystical sanity to say that we are all awake. Fires will be kindled to testify that two and two make four. Swords will be drawn to prove that leaves are green in summer. We shall be left defending, not only the incredible virtues and sanities of human life, but something more incredible still, this huge impossible universe which stares us in the face. We shall fight for visible prodigies as if they were invisible. We shall look on the impossible grass and the skies with a strange courage. We shall be of those who have seen and yet have believed.

It is a reasonable position, he is saying, to assert that people who wear black clothing and masks and assault their opponents in the street and demand ritual recitation of their slogans are anti-fascists: it is reasonable to state that people who want only for everyone to be left alone to live their lives as they choose are fascists.

It is rational, he is saying, to say that people who want society ordered according to skin color are the anti-racists, and that the people who insist that skin color should be ignored entirely are racists.

It is entirely logical, he is saying, that a biological female who identifies as a man and carries a baby to term is a man who had a baby, and that anyone who questions whether a man can have a baby is cruel and hateful.

It is pure reason to assert that when people kill other people over a cartoon, the problem is with the cartoon.

It is an act of faith, on the other hand, it is almost mysticism, to suggest that black-clad thugs assaulting people on the street are fascists, that judging people by the color of their skin is bigotry, that only women can birth children, that killing someone because of a drawing in a newspaper is barbaric.

Spanish politician temporarily suspended by Twitter after saying ‘a man cannot get pregnant’, Yahoo! News, May 16

Female student, 29, who said ‘women have vaginas’ and are ‘not as strong as men’ faces disciplinary action by university after fellow classmates complained about the ‘offensive and discriminatory’ comments, Daily Mail, May 15

And a whiff of another orthodoxy, from the Wikipedia article “Male pregnancy“:

Human males do not possess a uterus to gestate offspring. The theoretical issue of male ectopic pregnancy (pregnancy outside the uterine cavity) by surgical implantation has been addressed by experts in the field of fertility medicine, who stress that the concept of ectopic implantation, while theoretically plausible, has never been attempted and would be difficult to justify – even for a woman lacking a uterus – owing to the extreme health risks to both the parent and child.

Robert Winston, a pioneer of in-vitro fertilization, told London’s Sunday Times that “male pregnancy would certainly be possible” by having an embryo implanted in a man’s abdomen – with the placenta attached to an internal organ such as the bowel – and later delivered surgically. Ectopic implantation of the embryo along the abdominal wall, and resulting placenta growth would, however, be very dangerous and potentially fatal for the host, and is therefore unlikely to be studied in humans. Gillian Lockwood, medical director of Midland Fertility Services, a British fertility clinic, noted that the abdomen has not evolved to separate from the placenta during delivery, hence the danger of an ectopic pregnancy. Bioethicist Glenn McGee said “the question is not ‘Can a man do it?’. It’s ‘If a man does have a successful [ectopic] pregnancy, can he survive it?'”

These two orthodoxies cannot co-exist. There is no common ground between “men can bear children” and “only women can bear children.” They are mutually exclusive statements. Only one of them can be true, and if you are fool enough to say the wrong one out loud, you can be punished.

That’s heresy: saying the thing that is punishable, not because you consider yourself a heretic but because you know yourself to be orthodox.

To believe that all lives matter, that people should be judged by the content of their character rather than the color of their skin, that silencing and assaulting people with opposing points of view is a hallmark not of liberalism but authoritarianism, that the very point of free speech is to protect unpopular ideas, that childbirth is a biological function reserved to the females of our species… these were beliefs which, to paraphrase Chesterton, we once (and not so very long ago!) held lightly as truisms.

Now they are disputed, and we must hold them fiercely as faith.