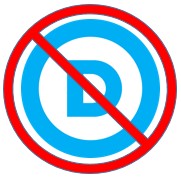 It’s gratifying to hear something you’ve been saying for years get said on the floor of the House of Representatives.

During comments on a bill to remove certain statues from Congress yesterday, House Minority Leader Kevin McCarthy said a number of things I’ve said repeatedly on this blog, and have been saying for an even longer time in private life.

Democrats have been agitating to have the statues removed because of their association with the confederate cause. There are apparently also some portraits that need to be removed for the same reason.

McCarthy couldn’t help noticing that they all had something in common.

That’s right (for those of you who chose not to view the video): the offending statues and portraits were all of Democrats.

If we’re going to get into the business of purging the nation of everything redolent of America’s shameful legacy of slavery, Jim Crow, and the KKK, there’s no way to do it without not just renaming the Democratic Party, but abolishing it.

McCarthy doesn’t go that far in his speech—he suggests only that the party change its name—but it’s where his logic inevitably leads.

It’s where the logic of today’s Democratic Party itself inevitably leads.

If we need to rename buildings and streets that bear the names of people on the wrong side of the Civil War, and remove all statuary and portraiture of them, then how on earth can there still be a Democratic Party in America?

It was Democrats that forced the nation into Civil War to defend slavery; that drafted, passed, and enforced Jim Crow laws to keep the newly freed slaves down; that organized and manned the Ku Klux Klan; that voted most heavily against the Civil Rights Act.

Those are all historical facts.

Here’s a Thomas Sowell column taking that even further, and concluding that with respect to the modern era “a lot depends on whether you judge by ringing words or judge by actual consequences.”

Just so. And let’s take that line to segue into a related story.

For most of the past year, the “ringing words” offered by prominent Democrats have been hymnals in praise of the left’s most radical element: the crazies who want to defund the police and believe that “all cops are bastards” and so on—which is in fact the exact opposite of what American blacks actually want. By midsummer 2020, for example, when demands for defunding the police were on every Democrat’s lips, 81% of black Americans surveyed wanted more or the same amount of policing in their communities: only 19% wanted less.

It is therefore notable that a black, law-and-order Democrat—a former cop, no less—is now leading the race to become New York’s next mayor.

I’m happy to report that Berlingske has committed actual journalism on the subject.

A marine was shot in Times Square in New York. He survived—but a political slogan died
Birgitte Borup, erlingske.dk, June 30

I confesss I approached the article skeptically: in its coverage of American politics, Berlingske hasn’t inspired much confidence in their ability to deviate from official Democratic Party talking points. I think this blog has provided ample evidence of that.

But here’s the opening of Borup’s piece (my ellipses elide only some of the details of the shooting):

But together, they contribute to a narrative of a United States in post-pandemic change.

One episode unfolded when a man the other day drew a gun in Times Square, the famous inferno of tourists and street performers in Manhattan.

The man had gotten into an argument with a bunch of other men outside one of the neighborhood’s countless hotels, The Marriott Marquis, when he unjustifiably fired his weapon.

The bullet ricocheted and struck a random pedestrian, the 21-year old marine Samuel Poulin, who was visiting from Kentucky to attend a baptism.

The shooting in Times Square came just days after a more peaceful but almost as remarkable event in “The Big Apple.”

Eric Adams won the first round of the Democrats’ primary election ahead of this fall’s mayoral election in the metropolis. The election is not decided, but he looks like the likely replacement for the unpopular Bill de Blasio. And why is it so noteworthy?

Because Eric Adams, a former police officer, has gone to the polls on one dominant agenda: Law and order must be restored in the streets of New York City. In fact, he was the only Democratic mayoral candidate to avoid the slogan that has become dominant in the left-wing part of the Democratic Party: “Defund the police.”

Having read that far, I thought, “well, sure, but Democrats are now trying to blame Republicans for wanting to defund the police, so the average Berlingske reader isn’t going to see anything weird about a Democratic politician’s unwillingness to go against the Defund the Police mantra; they’re more likely wondering why the other candidates would support a Republican cause.”

But Borup actually gets to that. She really does. And even more: she cites the stats showing that police forces have been shrinking as a consequence of the national hysteria against them, and that (“surprisingly?”) murder and violent crime have been going through the roof. And then she actually includes a tweet describing Biden spokesperson Jen Psaki’s claim that Republicans have been calling to defund the police as “absolutely shameless.”

Which, of course, it was—one just doesn’t expect Berlingske to acknowledge as much.

Eric Adams himself says that duality makes him the man of the future. That the rest of the party should take a look at the city that never sleeps and realize that they themselves have fallen asleep at the wheel.

The people want security, he believes. The police’s time as a whipping boy is about to ebb. There are many indications that he is right.

One nit here: The people always want security. Always have, always will. The people never wanted the police defunded or diminished (although many, myself included, would like to see substantial police reform). There’s not a poll out there, nor has there been, that shows a majority of voters of any class, color, sex, or age asking for fewer police. Only the demented hysterics of the Democratic Party ever said that.

The biographical note for Borup says that she’s a foreign correspondent “who has previously lived in New York.” I wonder if her honest appraisal of what’s going on there is partly informed by old friends still in the city telling her what a violent shithole it’s becoming. Or perhaps she lived there during the Giuliani administration, as I did, and can see the obvious decline for herself, even from afar.

For more than 150 years, race has been the Democratic Party’s particular obsession, their lever of choice in moving public opinion.

Obviously the party no longer supports slavery, Jim Crow laws, or the KKK. But their obsession with race is nevertheless undiminished, and will be until voters punish instead of reward them for it.

A law-and-order former cop being elected mayor of New York would certainly be a step in the right direction.

(Disclaimers: I doubt I support Adams on very much beyond his determination to get things back under control in what, in good times, really is the Greatest City in the World. After all, you don’t get to be president of Brooklyn by advocating conservative issues. I also understand that as a candidate who has challenged election results, he’ll probably have to be universally reviled and deplatformed.)