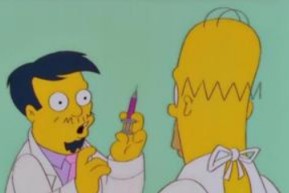 It’s been a mantra of the pro-choice movement for as long as I can remember: “My body, my choice.”

It’s a good illustration of how our different perceptions of reality make communication so difficult. Someone who believes every fetus is just a “clump of cells,” for example, will of course believe that the person in which that clump resides ought to have total control over what to do with them: they wouldn’t see abortion as anything more morally complicated that the clipping of nails or cutting of hair. If, on the other hand, someone believes that every unborn child is a human being, then they’re going to believe that that unborn body is entitled to the same considerations granted its mother. (Sory: its “birthing person.”)

The Nicki Manaj kerfuffle I chronicled yesterday (and which is still a train wreck in progress) was just one of many recent episodes highlighting the inconsistency of the ruling class’s professed respect for American citizens’ sovereignty over their own bodies.

DR published an article on the Minaj affair this morning. It doesn’t add anything new to the saga, but it’s curious in that the question of vaccine mandates—the very heart of the issue—doesn’t even come up.

It’s an astonishing omission, given that Minaj’s advice not to be bullied into vaccination was an obvious swipe against mandates.

As usual, however, DR chooses to invert the issue: instead of giving us some context on the bullying Minaj was worried about, they go galloping after the phenomenon of “vaccine skepticism.”

Minaj: “Get vaccinated only if you’re comfortable with it: not because you’ve been bullied into it.”

DR: “Why are so Americans refusing to be bullied into submission?”

There is a surprising amount of vaccine resistance in America, but it isn’t monolithic and there’s even more opposition to vaccine mandates. Different groups have been resisting the vaccine or the mandates, or both, for different reasons. We can argue about the validity of those arguments, but intellectual honesty requires that we at least acknowledge them.

DR has no room for intellectual honesty, however—that would be off-brand—so they just go with the consensus talking point of the ruling class. In a section entitled “Vaccine skepticism is a big problem in the USA,” they write:

The White House has struggled all year to convince more Americans to let themselves be vaccinated.

There’s particular skepticism among young Republicans, writes the AP news bureau. Joe Biden’s government has pointed to false and misleading information about the vaccines as the main reason that many are resistant.

It would have been just as accurate to say that “there’s particular skepticism among healthcare workers, according to WebMD and Carnegie-Mellon University,” and that “Joe Biden planted the seeds of vaccine skepticism while running for president last year.”

DR provides no link to the AP claim and makes no mention of the fact that Joe Biden and Kamala Harris were expressing doubts about the vaccines throughout the 2020 campaign.

Nor does DR make any effort to investigate why Americans are skeptical.

However, the Kaiser Family Foundation did ask Americans why they’re avoiding the vaccines; the table below presents an overview of their findings:

(That 38% citing mistrust of government as a major reason not to get vaccinated should come as no surprise. Americans distrust their government to a much higher degree than Europeans in general or Danes in particular: according to a 2020 OECD study, only 46.5% of Americans trusted their national government, compared to 71.6% of Danes.)

KFF slices and dices and drills into their data and produces a lot of interesting findings, among them that 63% of Democrats say the newness of the vaccine is a major reason why they aren’t getting vaccinated, compared to just 50% of Independents and 51% of Republicans.

(It would be interesting to drill deeper into those numbers to see how many of those Democrats first became concerned about its newness when Joe Biden and Kamala Harris were talking smack about the vaccines in 2020.)

In fact, according to WebMD:

An ongoing monthly survey of more than 1.9 million U.S. Facebook users led by researchers at Carnegie Mellon University in Pittsburgh recently looked at vaccine hesitancy by occupation. It revealed a spectrum of hesitancy among health care workers corresponding to income and education, ranging from a low of 9% among pharmacists to highs of 20%-23% among nursing aides and emergency medical technicians. About 12% of registered nurses and doctors admitted to being hesitant to get a shot.

Doctors, nurses, pharmacists, EMTs, and their aides come in all colors, sexes, faiths, and political orientations. They’re also the very people one would expect to be the most informed about the relative risks posed by vaccination and the Wuhan virus itself.

And their vaccine skepticism is quite pronounced. In fact, hospitals are facing staff shortages as nurses and other health workers quit rather than submit to vaccination mandates.

But no one is saying, “Our frontline healthcare workers are highly skeptical of the vaccine.”

It’s reasonable to wonder why.

None of this should be construed as a case against vaccination. As I’ve said repeatedly, I believe that for most people it’s the right way to go. I got my vaccination as soon as I was eligible. One can simultaneously believe that the vaccinations are safe and effective and that vaccine mandates have no place in a free society.

New cases are declining in the United States, and have been since the 7-day rolling average peaked two weeks ago… about a week before Biden’s angry speech announcing mandates.

But let’s get back to DR.

Their article is pegged to the fact that Nicki Minaj spread an apparently false rumors about vaccination, and covers the responses it elicited from Trinidad’s health minister, the White House and Downing Street. It then segues into the larger issue of vaccination skepticism in America, at which point it emphasizes the skepticism of… young Republicans. (And libertarian podcast star Joe Rogan.) And it concludes (a little weirdly) by stating that the Biden administration has attempted to win the support of young Americans by enlisting celebrities like teenaged pop-star Olivia Rodrigo to encourage vaccination.

Without a single word about the mandates.

They could have used the Nicki Minaj episode to launch into any number of interesting and informative pieces on the complex cultural dissonance in America right now, but the DR stylebook clearly offers only one approach to stories about America: Democrats good, Republicans bad.

And they stuck to it.

Featured image: screencap from The Simpsons.