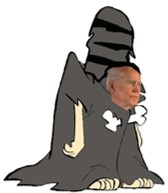 It is a truth universally acknowledged that Friday afternoon was a disaster for the Biden administration.

That separates it from most Biden administration disasters in that they’re usually not acknowledged by the establishment media.

On the other hand, the mere act of interpreting the events as “bad for Biden” contains a fair amount of spin to begin with: never mind these three disasters—shit happens—what really matters is that they’re bad for Joe.

Our relations with our oldest ally were screwed up by Biden policy; the brilliant and “righteous” military operation he boasted about turned out to have killed a humanitarian aid worker and seven children; and the booster policy he proudly promised would be kicking in today was shot down by his own FDA.

Those three things were indeed “bad for Biden,” but a more accurate phrasing would be, “three more Biden screw-ups blew up within an hour of each other.”

Here’s A.P. doing their best to circle the media wagons around the man whose ability to fuck things up we were famously warned by Barack Obama never to underestimate:

On Friday, the Pentagon acknowledged that a drone strike in Afghanistan killed 10 civilians, including seven children, not terrorists. A panel advising the Food and Drug Administration voted to not recommend COVID-19 booster shots for all Americans over age 16, dashing an administration hope. And France announced it was recalling its ambassador to the United States out of anger for being cut out of a secret nuclear submarine deal Biden had struck with the United Kingdom and Australia.

The headlines, all within an hour, underscored the perils for any president from situations that can define a term in office.

HotAir’s Jazz Shaw does a pretty good job dismantling the AP’s passive presentation (why do bad things always happen to Joe Biden?) in a post entitled “Joe Biden’s terrible, horrible, no good, very bad day,” so I won’t bother tearing into that execrable exercise in journalismitude.

However, here at home TV2 took a similar approach:

(Language note: a literal translation of the headline would actually be, “In one night, three bad newses hit Joe Biden,” but we don’t atomize news in English, so I had to punt.)

Larsen takes the same basic approach as AP, setting the three incidents as almost random bolts from the blue that struck the president all at once as a kind of freak accident—as though he’d simultaneously been hit by lightning, bit by a shark, and stung by an asp.

Neither AP nor TV2 seem to feel Joe Biden is the author of his own misfortunes.

Which should be surprising, but c’mon man, we all know Joe Biden isn’t even the author of his own words.

It is customary to say all good things come in threes, but this three-leaf clover President Biden would have liked to have been without. Because even though the cases are fundamentally different, they help to reinforce the impression that Joe Biden’s administration is flailing. Opposition to the vaccine strategy, an open feud with America’s oldest ally France and an unfortunate drone attack that cost the lives of several innocent Afghans. Together, these three stories help to call into question Joe Biden’s political judgment. But fortunately, Biden can always claim that it would have been worse if the president was still named Trump.

Yes, that is fortunate, isn’t it?

It’s fortunate that although these three consequences of Biden’s own actions might “reinforce” the “impression” that the Biden administration is a radioactive train wreck, Biden himself can shrug it all of with a masterly play of the “I’m not Trump” card.

Because otherwise he might actually be held responsible for his actions, and we can’t have that. The man’s a Democrat, for god’s sake: we can’t have Democrats evaluated on the merits. No Democrat would ever be elected again!

I don’t want to be too hard on Reimer-Elster, because of all the alleged “American experts” trotted out by the Danish media, he’s among the least horrible. Now and then he actually gets something right, which can’t be said for most of them.

But take a moment to digest what he’s saying here. He’s acknowledging that these stories call Biden’s judgment into question (although anyone who hadn’t been questioning Biden’s judgment for at least the last 34 years clearly hasn’t been paying attention). And he’s willing to concede that each of these things might kinda sorta contribute to the idea that the administration is clueless. But he’s concluding that as bad as all that is, Biden can dodge the political fallout by saying it would have been worse if Donald Trump were still president.

As the lawyers like to say in courtroom drama: Objection! Assumes facts not in evidence!

Remember when the Trump administration blew up a humanitarian aid worker and seven children and his general bragged about it as a “righteous” hit on a high-level terrorist?

Remember when Trump kept checking his watch while the bodies of slain servicemen were solemnly repatriated?

No? That’s because those things never happened.

Remember when one of those allies that just hated Donald Trump because of all that awful orange Trumpiness actually recalled their ambassadors instead of just bitching to the media?

No? I’m not surprised: that never happened, either.

But I’ve gotten carried away. Let’s get back to what Reimer-Elster means when he says “But fortunately, Biden can always claim that it would have been worse if the president was still named Trump.”

The phrase makes no sense unless it’s understood that the claim would be believed by enough Americans to offset the plummeting credibility of this administration. Correct? Otherwise it would just be another stupid thing to say, and with respect to Biden right now that’s just coals to Newcastle.

Biden’s job approval is already underwater (more likely voters disapprove than approve of the job he’s doing), so who exactly are these Americans that just need to hear him speak his magic spell of It Could Be Worse?

Those who support him already support him; are we supposed to imagine those who don’t will rally to his side once this wondrous spell is cast?

Are we supposed to believe that fickle swing voters who disapprove of the things Joe Biden is doing and the mess he is making will come rushing to his support as soon as they realize, Whoa! Dude! Joe Biden is not Donald Trump!

And should Biden claim that it would have been worse if Donald Trump had been president, it would only reinforce the impression that he’s flailing and cast even more doubt on his political judgment.

Even an “American Expert” ought to be able to see all that.

Say it often enough, and you too can be an American Expert in Denmark.