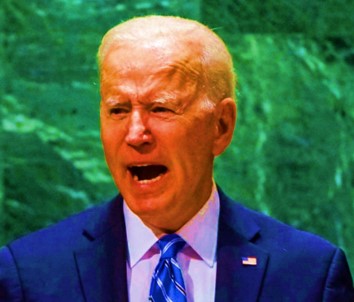 Over at Berlingske, Mikkel Danielsen seems almost ready to call bullshit on the American president, but obviously can’t, so he does the next best thing: he compares him to Trump.

With Trump it was at least clear that he thought the EU wasn’t a useful partner, a useful ally. We see a clear lack of openness and loyalty.

DR didn’t even have a full article on the address this morning, just a quick-hit blurb by Sean Coogan emphasizing that Biden doesn’t want a new cold war.

TV2 has a much more positive reaction (“Joe Biden to UN: America’s ready to lead the world”), and quotes the prime minister:

For the Danish Prime Minister, Mette Frederiksen, who’s in New York to attend the UN General Assembly, such ripples on the surface don’t change the fact that “it was an unconditional pleasure to listen to Biden today.”

The ripples she’s referring to are little things, really: like the way the US bugged out of Afghanistan without coordinating the withdrawal with allies who still had troops and civilian workers in the country, and the way the US made an agreement with Britain and Australia that cost the French a lot of money and a few tens of billions of euros. (Both of these topics were apparently topics of considerable emotion at an EU “crisis meeting” prior to the General Assembly session.)

Politiken had two related articles up on their home page this morning: pride of place was given to Mette Frederiksen Targets Sensational Criticsm by EU Leaders, in which the prime minister’s aforementioned optimism about Biden’s speech was juxtaposed against the criticisms from the EU leadership. Tucked beneath that story in a smaller font: Was Joe Biden Speaking Truthfully When He Addressed World Leaders for the First Time? And just under that, in an even smaller font: Taliban Request Speaking Time at UN General Assembly.

Jyllands-Posten also ran a story about the Taliban seeking time to address the UN, but they put it above their piece about Biden’s address (“Analysis: Joe Biden Tried to Pour Oil over Europe’s Churning Waters”). Their lede:

Although US President Joe Biden stressed the importance of working with his allies, he danced on cat paws over his problems with Europe.

(“Dancing on cat paws” is roughly equivalent to “tiptoeing carefully,” but the imagery was so comical I kept the literal translation.)

Bottom line: the takeaway from the Danish press seems to be that Europe likes what Biden says, but not what he does. And they don’t trust him.

I touched on this disconnect between Biden’s words and actions yesterday, and to save you the trouble of having to click through that link and find the relevant passage, here it is:

I’m also confident he and his speechwriters and handlers believe his words will awe and terrify the Chinese and Russians, because they clearly believe that China and Russia are as stupid as they themselves are and will therefore be unable to differentiate between words and actions.

Joe Biden just handed Afghanistan back to the same primitive barbarian thugs we went over there to wipe out. That’s a more powerful message than anything he may happen to read off his teleprompter in Turtle Bay.

It appears the the EU isn’t any stupider than China or Russia: they, too, are able to differentiate between words and actions. Mette Frederiksen, on the other hand, still seems to think words can be pretty swell.

So let’s go back to the words of the EU President: “With Trump it was at least clear that he thought the EU wasn’t a useful partner, a useful ally. We see a clear lack of openness and loyalty.”

I don’t disagree with the premise as expressed: neither Biden nor Trump thinks the EU is a useful partner or ally, because it’s not.

The EC was based on the idea that integrating the economies of France and Germany (along with the Benelux countries and Italy) would make it less likely that they’d keep slaughtering one another every generation or two. As the six-member EC expanded and eventually morphed into today’s 28-member EU, a pretense arose: the pretense of an EU as a counterweight to the US in the western world.

The individual nations of Europe are all, to a greater or lesser degree, useful partners and allies to the United States, and vice versa, at different times and in different ways. The EU is not, most of the time, because the EU is still a Frankenstein monster struggling to understand itself: head of Germany, heart of France, hands of Italy and Spain, feet of Belgium and Sweden, left earlobe of Denmark, and so on.

Trump wasn’t wary of the EU out of any ideological conviction, but because the EU is of only limited utility to the United States. That doesn’t change just because Biden is now the American president.

That’s not to say American presidents are antagonistic to the EU, only that they understand, as we all should, that in most international issues America is better off working with the various European heads of state than with the EU itself. Because Joe Biden is an old-school, glad-handed pol, and because he’s ideologically sympathetic to the leftist vision of the EU, he’s just less inclined than Trump was ever to speak a discouraging word about it. So he speaks highly of the EU even as the particular circumstances of specific circumstances and events require him to piss all over it.

Similarly, the EU is not always going to find the US a useful ally or partner. And they’re certainly not shy about speaking up when they find America’s cooperation wanting.

Thus the EU is delighted by Biden’s commitment to the various leftist projects to which the EU is committed (climate, socialism, etc) even as they’re appalled by his kicking of France to the curb in favor of non-EU countries.

I’m always happy to see Joe Biden kicked around on the world stage, or any stage, because I think the man is a fraud and an imbecile and am tired of the American media serving as his praetorian guard. I disagree with his vision. I disagree with most of his administration’s policies. I’m disgusted by the constant gaslighting by the president, his administration, and the media propping them up. And on the Afghanistan question, Biden treated the individual nations of Europe just as shabbily as he treated the EU, and he deserves to be called out for it: since the American media won’t do it, then I’m happy at least the European media will.

On the contrary: I’d even say the sound of their complaints is an unconditional pleasure.