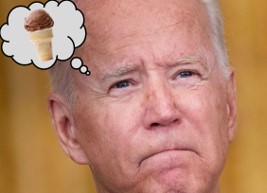 Berlingske published a Mikkel Danielsen piece today entitled “Analysis: Joe Biden risks becoming a mediocre president. He has to save his reputation this week.”

I could easily spin off a thousand words on the absurdity of the headline alone (he risks becoming a mediocre president?).

Joe Biden was a mediocre senator and a mediocre vice president. He’s in the Oval Office today not because there was a great wave of enthusiasm to put him in there, but because the Democrats (and their allies in media, big tech, Hollywood, sports, and corporate boardrooms) spent four years ginning up so much hatred and contempt for a sitting and duly-elected president that a hamster probably could have defeated Donald Trump last November.

A hamster probably would have been better for the country.

The country is currently beset by problems that are largely or entirely the consequence of decisions no hamster would have made, and of policies no hamster would have promoted. Joe Biden owns them, and the country knows it, so the country is steadily turning on the man responsible for those problems. (Which is not to say they’d all rally around Donald Trump if they had it all to do over again, although there is some evidence to suggest they would.)

Mikkel Danielsen’s takeaway from all this is, of course, that this is all very bad for Joe Biden.

Not America. Not her people. Not her friends and allies and trading partners. Joe Biden.

He makes bad decisions and they boomerang back to explode in his face. So unlucky!

Let’s start with the lede: “It’s not going very well for Joe Biden. He risks becoming an insignificant parenthesis in American history. This week he has to save a presidency on the way down—but members of his own party threaten to spoil his grand plan.”

If members of your own party are tanking your agenda (which is of course also opposed by the opposition party) then maybe the problem is… your agenda.

Maybe it’s not going well for Joe Biden because of his agenda, not in spite of it.

Maybe the grand gesture required to save his imperiled presidency would be to reverse course on his stupidities.

But watch where Danielsen goes with this. He starts with a high noon setup:

Joe Biden has set out a giant plan. A plan that will alter the United States. A plan he’ll be remembered for.

But now the plan risks running completely off the rails. And so does Joe Biden’s entire presidency.

It’s the moment of truth in Washington, D.C.

Did you get chills?

Are you visualizing Gary Cooper in the swirling dust of some whistle-stop town in the old west, standing strong and firm as some dark horse bearing a black-hatted stranger comes loping into town?

If you are, allow me to suggest that the stranger in the black hat is riding backwards in the saddle. And it’s not a horse, but an ass. And the rider is unarmed. And half asleep. And his name is Joe Biden.

And Gary Cooper is whatever political force remains in America to stop his giant plan from altering America.

But this is just stage-setting.

Danielsen explains that several months ago Biden crammed “all of his political ideas and visions” (a phrase that offers such low-hanging fruit I won’t even touch it) into two big reforms: a trillion-dollar infrastructure reform to invest in “new roads, bridges, airports, rail lines, and internet cables” throughout the country; and a gigantic “everything reform” that would throw money at a whole lot of things that have nothing to do with infrastructure.

The “everything reform” in particular is extremely ambitious. No president has ever before set so much of his political program into a single piece of legislation, writes the New York Times.

This week Joe Biden and his Democratic allies have to try to get the two reforms through Congress.

It’s nerve-wracking. And it’s going to be absolutely decisive with respect to whether Joe Biden’s presidency becomes a success or a fiasco.

Note how Danielsen is casting things: Biden’s got an extraordinarily ambitious plan to alter the nation that the he has to get through Congress lest his administration be judged a fiasco.

Do the reforms themselves even matter? Are we supposed to accept as a given that everything in these bills is a boon and a wonderment, a magnificent improvement to a dire status quo? What if passing the bills would be disastrous for the country? What if Americans don’t want their country “altered?” Back in October 2020 Danielsen was careful to explore what the Amy Coney Barrett nomination would likely mean for the country, and what that meant to both sides, rather than simply declaring it a crowning achievement for Donald Trump. (Although he also did that.)

But instead of exploring the bills themselves, and what they would actually mean for America, Danielsen here goes into a digressive cul-de-sac on Biden’s popularity, including a chart illustrating how Biden’s disapproval numbers have eclipsed his approval numbers over the past month or so.

And then we’re right back to just how gosh-darned important it is for Biden to get these bills through Congress:

The downturn has many explanations: Joe Biden handled the chaotic withdrawal from Afghanistan poorly. Joe Biden has no control over the border. Joe Biden promised to get the pandemic under control but 2000 Americans are dying every day from covid-19.

Otherwise, he risks going down in history as the president who defeated Donald Trump, but didn’t do a whole lot else.

He must have his reforms through. And it has to be now.

Daniel explains that the urgency is because Democrats are likely to lose Congress in next year’s midterms. Curiously—but not really—he neglects to explore the reason why Democrats are expected to get stomped in 2022. And that reason is the black-hatted fool riding the ass backwards into town at High Noon. In other words, once again Joe Biden is up against an obstacle of his own making. He has to force this shit sandwich down the country’s throat right now because he’s been such a lousy president that he’ll probably never have another chance.

To clarify this for all of us, we begin a new section with the heading “A game of chicken with Biden at stake.”

And here we’re informed that although the smaller roads-and-bridges bill has passed the Senate and ought therefore to make it easily through the Democrat-majority House, extremists in Biden’s own party are threatening to vote it down unless the Senate also passes the “everything reform” bill.

“The one reform depends on the other,” Danielsen explains. “All or nothing.”

Next he explains how the “everything reform” bill faces a hurdle in the Senate because Senators Joe Manchin (D-WV) and Kyrsten Sinema (D-AZ) “don’t care for Joe Biden’s plan.”

Finally he reminds us how the inability of Joe Biden to unite his own party could bring his whole (imagined) legacy crashing down. (Without reminding us that this man who can’t unite his own party on his own signature bills had run for president promising to unite the whole damn country.)

Danielsen then covers his analysis in caveats, explaining that everything’s up in the air and anything could happen and who knows where it will all end up?

The coming days will show whether Joe Biden gets the win he so badly needs. Or whether his presidency is running off the rails.

The coming days will also show whether America is going to bankrupt its future and swell its already incompetent bureaucracy to Leviathan proportions in one giant leap toward socialism.

What we really need to ask ourselves is, “How does this affect Joe Biden?”