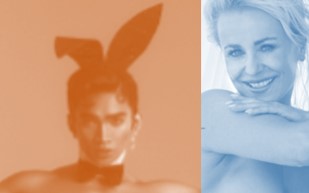 Big stories tend to get covered simultaneously by major media outlets around the world, but smaller stories sometimes take a while to percolate their way around the world, and they can change along the way, sometimes significantly. So when I see a European headline about a story I’d seen covered days or weeks earlier by an American source, or vice-versa, I click into the article to see whether anything’s changed.

I thought that’s what I was doing Sunday evening when I came across a Danish headline written in a classic click-bait formulation.

The Berlingske article by Solveig Gram Jensen was entitled “She smiles, beautiful and sexy. But the model on Playboy’s cover has something her predecessors can’t offer.”

I smirked because, thanks to a slew of stories in American media last week, I already knew what the model had that her predecessors lacked: a penis.

(The pronouns in the headline confused me, but that’s nothing new these days.)

I clicked through to the article mostly to see how Jensen would make the big reveal, but also to see how Berlingske would cover the story.

And here’s what I found:

That’s the cover of Playboy we know.

And yet this month’s cover model on the German edition will probably get readers and the rest of the world to take an extra look.

Because it’s a dude, right?

The front page of the magazine is adorned by the well-known German TV host Diana Schell, who is not just dreamily beautiful. She is also 51 years old and has both smile wrinkles and a few decades more on her back than the usual playmates, as the models in Playboy are called.

That’s not the Playboy story I thought it was.

Not even close: the article includes an image of the Playboy cover in question, and Diana Schell is pretty damn hot. (Go ahead and look. I’ll wait.)

Hotness aside, those “minimal panties” Schell is wearing make it pretty clear she has no penis.

Which ordinarily wouldn’t be very surprising. After all, “What is a penis?” would never be the Jeopardy question to the answer “Something you find between a Playboy bunny’s legs.”

But if you, too, have been following American news lately, you can understand my confusion:

And now, just a year and a half later, they’ve got a gay man on their (digital) cover.

Anyone who’s had even ein kurzer Blick at the mostly undressed Diana Schell can understand why the German edition of Playboy might have chosen her as a cover model: she’s a beautiful woman and she’s mostly naked. That’s something Playboy’s traditional market in any country can appreciate.

But what made Playboy think their traditional market would find this appealing:

I’m glad the LGBT community and Bretman Rock’s brown people community can enjoy this “huge deal,” and I agree it’s surreal, but I’m still a little puzzled by the whole thing.

Heterosexual men aren’t interested in looking at men’s bodies.  It’s not “hate,” it’s just the definition of heterosexuality: straight guys are attracted to women and enjoy seeing them naked.  They always have and always will. If you’ve ever wondered how the planet got so crowded, that’s half your answer.

It’s not a complicated or controversial proposition. It’s the foundational truth on which Hugh Hefner built his empire. So why would Playboy betray their own market so completely?

I can only think of two business reasons a publication might choose to pirouette their targeting this dramatically: because they’re losing their existing market or because alternative markets offer more opportunity. (Or both.)

The market of men who enjoy looking at pictures of naked women is obviously not going anywhere, but the easy availability of such pictures online has made it a much more crowded marketplace.  As a purely digital publication, Playboy is competing directly with the entire internet.  So it’s understandable that it might be seeking ways to broaden its appeal or find a new market.

The internet is simply running over with pictures of naked and semi-naked people: male, female, gay, straight, fat, skinny, tall, short, indoors, outdoors, alone, in couples, in groups.  People of every size, shape, and color.  They can be summoned at will by anyone, at any time, from anywhere.  How can Playboy compete with that?

So it obviously had to do something.

It makes no logical business sense to redirect your brand toward a market that’s just as competitive but even smaller than your existing market.

As near as I can tell, the only thing Playboy got from this episode is publicity.

A lot of publicity.

And not just any publicity, but woke publicity.  In the words of Bretman Rock himself, as trumpeted by Playboy’s own twitter account, this is “a huge deal for the LGBT community.”  The American headlines cited above suggest that this is the angle the American media took with the story. First gay man, or openly gay man, on the cover of Playboy. Groundbreaking! Stunning! Brave!

(It’s not such a big deal for the “brown people community,” however, in that Playboy has been featuring women of all colors and backgrounds for more than half a century: their first black Playmate appeared on their cover in 1965—33 years before Bretman Rock was even born. But maybe that’s why he very carefully spoke of “his” brown people community.)

I’m not sure I even buy that this is a big deal for the LGBT community. After all, it wouldn’t be a big deal for a straight woman to appear half naked on the cover of a gay men’s skin mag, would it? Why is the presence of Bretman Rock on the (digital) cover of Playboy a victory of any kind for anyone who isn’t Bretman Rock?

Woke publicity is the expression of wokeness as a brand value.

The problem with this line of thinking is that it’s dumb.

Because wokeness is itself really, really dumb.

Wikipedia defines woke as “a term, originating in the United States, that originally referred to awareness about racial prejudice and discrimination. It subsequently came to encompass an awareness of other issues of social inequality, for instance, regarding gender and sexual orientation. Since the late 2010s, it has also been used as a general term for left-wing political movements and perspectives emphasising the identity politics of people of colour, LGBT people, and women.”

Wokeness is dumb because identity politics is dumb.

And when I say dumb, I mean divisive and destructive and poisonous.

Because identity politics is racist, and sexist, and plenty of other –ists besides.  It is all those things because it doesn’t see human beings as individuals, but as white people, brown people, black people, gay people, straight people, two-spirit people, and so on.  People are thereby ascribed properties based not on who they are as individuals, but by these superficial characteristics. And they’re ranked on them.

But if you want to play by woke rules, you ought to obey woke rules. From its own website, here’s the Management Team of the PLBY Group (“We are a pleasure & leisure company serving consumers around the world with products, services, and experiences to help them look good, feel good, and have fun. Our flagship brand, Playboy, is one of the most iconic and recognizable lifestyle brands in the world, driving more than $3 billion in consumer spend annually across 180 countries.”)

Doesn’t “look like America” to me. Does it to you? I see five white guys, two white women, and one non-white woman. Not a single black or Hispanic in the mix.

And they’re perfectly content to shove the woke right down your throat.

It’s sad for me as an American to see that even Germans aren’t as thoroughly stupid as Americans these days.  When the German edition of Playboy wanted to get some publicity, they found a smokin’ hot babe of 51 summers to put on their cover.  It’s still naïve and probably futile gesture—the MILF genre has been a thing online since the 90s—but at least it shows that German Playboy knows their market: straight men who really like to see beautiful women naked (and frankly don’t give a damn what color those women are, or where their families are from, or who they sleep with).  The publicity they gain from this stunt may not help them stay afloat, but at least it won’t hasten their demise.

In America, though, it’s woke seppuku all over.  Suicide by wokeness.