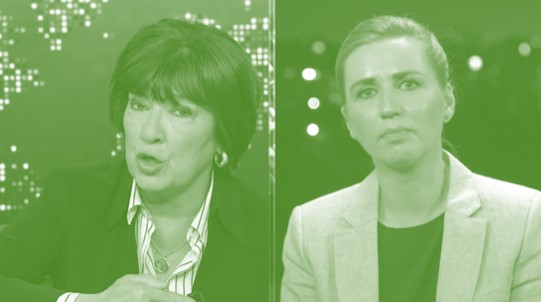 Frederiksen was in New Delhi on a state visit to India; Amanpour was back in CNN’s Atlanta studio.

The 13-minute interview was ostensibly about the climate, and most of it was.

Berlingske chose to focus on Amanpour’s having ambushed Frederiksen with an immigration question:

Mette Frederiksen thought she’d be talking about the climate on CNN. Then an old ghost popped up.
Kalinka Aaman Agger, Berlingske.dk, Oct 12

You can see the whole interview on CNN, but here’s the gist:

Amanpour begins by asking whether the increasing tensions between China and Taiwan might bump climate issues to the back burner.

Frederiksen acknowledges that other issues do exist, and she “respects” them, but that we really need to focus on climate until the COP26 meeting in Glasgow.

Amanpour asks whether India isn’t behind in meeting climate goals; Frederiksen thinks they can meet them. She says the Denmark-India partnership is important because “we have the skills, they have the size.” She also says “our companies have the right answers” and that Denmark will reach its goal of 70% reduction in carbon emissions by 2030 because “we have to do it, we don’t have a choice.”

Amanpour says India is “lagging” and asks whether India and other developing countries don’t have a right to lag a little. She paraphrases their argument as something like, “easy for you guys to do all this, you had your industrial revolutions centuries ago, we need time to catch up.”

Frederiksen doubles down on her belief that India can meet its climate targets because they have a “green mindset,” but that of course we have to acknowledge that different countries have “different starting points.” She also repeats that “we don’t have a choice.”

Amanpour points out that G7 countries like France and Italy are also lagging.

Frederiksen responds that “we all have to do more,” even Denmark. She says the G20 meeting leading up to the COP26 meeting is just as important as the COP26 meeting, because “we have to set an agenda.”

Amanpour lays up a dunk shot for Frederiksen by stating that bad people are stoking fears that going green will hurt jobs and economic growth because “this story has not been told properly.”

Frederiksen tells the story properly by boasting that in Denmark we have “grown the economy in a green way,” and cites the “Danish green model.” She explains that although the climate is the most important thing ever, social justice and equality and gender issues “have to go hand-in-hand” with with green initiatives because, again, “we don’t have a choice.”

Then, about eleven minutes into the interview, Amanpour jumps away from climate to ask Frederiksen about Denmark’s immigration policies, which “some critics” contend are “chipping away” at the rights of asylum seekers and refugees.

Frederiksen isn’t having any of it, and starts off by saying that anyone looking at Europe’s immigration policies can see “the system isn’t functioning today.” Her long answer boils down to the idea that it’s “much more human” to help refugees and asylum-seekers in the regions and countries around them rather than on European soil. She’s built up a good of steam and says she doesn’t know if there’s enough time, but—

And Amanpour says no, there isn’t enough time, thanks so much, buh-bye.

A couple of thoughts:

First, China’s apparent and fairly transparent build-up to the conquest of Taiwan is a much more pressing issue than the climate. That’s true even if you think the climate is the ne plus ultra of issues, because (as I noted the other day) the CCP is threatening to nuke the hell out of Japan if even a single Japanese soldier stands in the way of China’s “peaceful” conquest of Japan. The science is settled: nuclear weapons aren’t good for the climate or the environment. If China tries to take Taiwan by force, there’s a high likelihood of a global war, and world wars have also been shown to be bad for the climate. Putting 100% of our focus on the climate while China’s telegraphing its intention to take Taiwan is a catastrophically bad idea.

Second, in a 13-minute interview of which only 11 minutes concerned the climate, Mette Frederiksen said “we have no choice” three times. That’s not an argument. We do have choices, and in democratic countries we ought to be allowed to discuss them. The increasing efforts to prevent debate are entirely undemocratic. They’re authoritarian.

On the other hand, even if one wants to argue that all of the economic growth came from green industries, that doesn’t mean there weren’t opportunity costs: how much growth might there have been in other industries had the money not gone into the green? What were the collateral effects of directing investments one way rather than the other? Were there better green options that might have achieved even better growth?

It would be nice if we could talk about such trade-offs rationally, instead of being told we’re all gonna die unless we do what we’re told because we have no choice.

Economics is about trade-offs. We can choose to go as green as we want, but it’s a choice, and every choice has consequences. And even within the world of “green” options, there are better solutions and worse ones. Abandoning fossil-fuel energy sources before our needs are fully met by renewable sources makes about as much sense as withdrawing one’s military from a hostile territory before removing one’s civilians.

The coming winter’s energy crisis will be instructive: voters in the northern hemisphere’s many developed democracies may discover, after paying hundreds or thousands of percent more to heat their homes, or having to go without heat for any amount of time, that green energy has been oversold to them.

We’ll see if they still believe they “have no choice” after that.