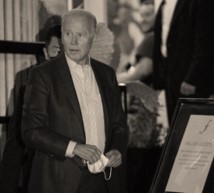 The first was about exploding vagina-scented candles.

The second was about an archaeological find decorated with penises.

The third was about Joe Biden (a twofer!—he’s a boob and an ass).

But let’s move on from Agge’s organ grinding and go straight to the story about Biden.

The title of the article is “Joe Biden was clutching his face mask with both hands but by then the damage had been done.”

It’s accompanied by a photo of the president captioned “President Joe Biden and Jill Biden ate this weekend at the Italian restaurant Fiola Mare in Washington, DC.  But the presidential couple forgot an important rule when they left the place.”

The rule they “forgot” was that masks are mandatory in DC restaurants.

Masks may only be removed when seated, for eating and drinking, and children under the age of two are exempt from the mandate.

While I’m not surprised to learn that Joe Biden “forgot” something—at this point it’s probably more newsworthy when the president remembers something—I am surprised to find the story covered in Berlingske.  CNN hasn’t covered it; nor has the New York Times.  Indeed, Agge’s article cites only Fox News and the New York Post—without making it a story about how right wing media are “pouncing” or “seizing” on the episode to make Biden look bad.

Agge even notes that Jen Psaki “attempted at first to downplay the episode by explaining that it was a misunderstanding, according to the New York Post.”

Agge doesn’t spend more time on Psaki’s attempted explanation, but here it all is straight from the White House transcript (the questioner here was Peter Doocy of Fox News):

Q  Thank you, Jen. There is a mask requirement inside D.C. restaurants, yet President Biden and the First Lady were not wearing masks while walking around a D.C. restaurant on Saturday. Why?

MS. PSAKI: Well, I think what you’re referring to is a photo of them walking out of a restaurant after they had eaten, masks in hand, where they had not yet put them back on yet.

So, I would say: Of course, there are moments when we all don’t put masks back on as quickly as we should, but I don’t think we should lose — miss — lose the forest through the trees here in that our objective here is to get more people vaccinated; make sure that schools and companies around the country can put in place requirements to save more lives and keep people safer; and, you know, not overly focus on moments in time that don’t reflect overarching policy.

Q  It was not just exiting the restaurant, though. He was walking through the restaurant with no mask on. There is a carveout for people under two or people who are actively eating or drinking. So I’m just curious why the President was doing this.

MS. PSAKI: I think I just addressed it, Peter.

Agge tries to explain the significance of the episode to her Danish readers by reminding them that “Joe Biden’s behavior needs to be seen in light of the debate about mandatory masking and vaccinations raging across America, where every state has its own rules.  The president has fought to get all Americans vaccinated and has been urging the use of masks.”

She points out that the president is hardly the only American politician who’s been criticized for behavior at odds with his public position on masking, then launches into a digression about Gavin Newsom’s ill-fated adventure at the French Laundry, with which the article concludes.

(It would have been nice if she’d noted he was not the only Democratic politician, but I’ll take what I can get.)

It’s a remarkable article in that it breaks away from Berlingske’s usual template of presenting bad news about Democrats as something Republicans cooked up to make them look bad, or as mere “bad luck.”

Remember the snarling, angry Joe Biden informing Americans that he was “losing patience” with them for not doing the things he wanted them to?

That’s the guy that made Biden look bad in this instance: himself.

This is a point I was making even before Newsom’s French Laundry faux pas: it’s not simple hypocrisy.  If someone goes around exhorting people to eat less meat, then gets caught tucking into a 32-ounce ribeye, that’s hypocrisy.  But if the same meat enthusiast seeks to use the force of law to punish anyone who eats meat, that’s no longer mere hypocrisy: it’s contempt.

I happen to agree with the sentiment behind Psaki’s aw-shucks observations that “there are moments when we all don’t put masks back on as quickly as we should” and that we shouldn’t “overly focus on moments in time that don’t reflect overarching policy.” True enough.  But I myself have never had a “moment” when I accidentally sought to force everyone to wear masks at all times, nor have I ever accidentally threatened people’s livelihoods for failing to comply with my will.

So there are two possibilities here: either Joe Biden is so far gone mentally that he actually forgot something that he genuinely believes to be a matter of life and death, or he doesn’t really believe it’s a matter of life or death to begin with.

Neither possibility reflects favorably upon the president.

But then, these days, what does?