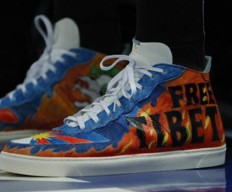 He says he learned English by watching SpongeBob SquarePants and Jersey Shore.

He has dated a Rockefeller.

He’s been outspoken against Turkey’s Recep Erdogan, at some personal cost. (His own account of having to flee Indonesia while his team was touring Asia during the 2017 offseason, and having his Turkish passport canceled while he was passing through Romania on his way back to America, is pretty riveting.)

Controversial basketball sneakers have caused China to turn off the TV signal for matches in the world’s biggest league
Malte Nørgaard, DR.dk, 22 Oct

The sneakers in question can be seen in the featured image accompanying this post (credit: Scanpix). You can see how they’d annoy a prickly fellow like Xi Jinping.

So China did what China does best: they cracked down.

China would rather not have too much time spent supporting Tibet. That’s the logical conclusion to be drawn after Enes Kanter’s boot stunt.

Boston Celtics games and highlights can no longer be streamed on the Chinese streaming service Tencent, while Kanter’s name has also been blocked on the major social media Weibo.

Instead, the Chinese have to content themselves with following Celtics games in text and images. On the other hand, they can read in Chinese media that Enes Kanter’s statements are an attempt to “get attention for himself” and that “Tibet is part of China.”

Wang Wenbin, a spokesman for the Chinese Foreign Ministry, said:

“We will never accept an attack like this that discredits the progress and development that is taking place in Tibet.”

It will be interesting to see how the NBA handles the affair. In the past, they’ve been all too willing to cave in to Chinese government demands, even proactively: in October 2019, for example, spectators wearing “Free Hong Kong” tee shirts and holding up signs supportive of the Hong Kong protest movement were escorted out of NBA preseason games, just a couple of weeks after the NBA itself issued a press release groveling enough to have been written by Uriah Heep:

“We recognize that the views expressed by Houston Rockets General Manager Daryl Morey have deeply offended many of our friends and fans in China, which is regrettable. While Daryl has made it clear that his tweet does not represent the Rockets or the NBA, the values of the league support individuals’ educating themselves and sharing their views on matters important to them. We have great respect for the history and culture of China and hope that sports and the NBA can be used as a unifying force to bridge cultural divides and bring people together.”

Morey’s tweet—and let’s not forget we’re talking about a tweet, and not something he engraved in granite on a monolith in the middle of Times Square—had said only “fight for freedom, stand with Hong Kong.”

As even the young adult website Vox noted at the time, the NBA’s reaction was “also quite broadly illustrative of a much larger issue. Once upon a time, the American people were promised that the integration of China into the global economy would promote freedom and democracy there. That promise has not been borne out. And the Rockets ownership and the NBA as a league are giving us a vision of the frightening possibility that the reverse will happen, and American capitalists’ eagerness to please the Chinese government will become a threat to freedom at home.”

I don’t like citing Vox (the “young adult website” sobriquet was minted by James Taranto): they’re mostly a garbage website of superficial leftist hot takes presented as dispassionate analysis. I cite them here to show that even the idiots at Vox saw precisely what was wrong with the NBA’s behavior at the time.

China recently launched a hypersonic missile around the world, apparently catching western military experts by surprise. Chinese Communist Party media have been promising to rain a nuclear holocaust upon Japan if “even one Japanese soldier” attempts to interfere with the “peaceful” union of Taiwan into China.

Maybe the NBA could try to be just a little more American. They are, after all, the National Basketball Association, and that nation is America. It wouldn’t be hard: just expensive.

They clearly have no strong principle against protest: look at how they made the entire 2020-21 season a tribute to the (Marxist) group Black Lives Matter.

Why not make the 2021-22 season a tribute to freeing Tibet, or Taiwan, or Hong Kong?

I’m joking, obviously. The NBA makes at least half a billion dollars annually off the Chinese market. What’s the crushing of a little domestic dissent compared to that kind of cash flow?

Enes Canter lost his Turkish passport and all contact with his Turkish family—many of whom are enduring harassment and worse back in Turkey—as the price of his criticisms.

So we’ll see how this plays out, but for the time being at least we have a Turkish Muslim who isn’t even an American citizen being a better American than the NBA.