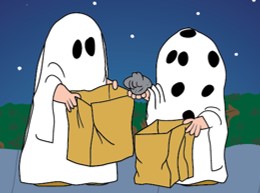 There was a depressingly predictable headline in the New York Post yesterday: “Massachusetts school district ditches Halloween to be more inclusive, will celebrate fall instead.”

It’s about what you’d expect: one Julie Kukenberger, Superintendent of Melrose Public Schools, issued a letter to parents last Friday.

“Over the past several years, MPS has worked to deemphasize Halloween and shift our focus toward community building through fall celebrations,” (Melrose Public Schools Superintendent Julie) Kukenberger wrote in a letter sent to parents Friday, which was obtained by the station. “As we work to address unfinished learning, two of our key priorities are 1.) equity and the inclusion of all students and 2.) fostering a sense of belonging and partnership with all students, families and staff.”

“I am working in collaboration with our elementary principals to map out, month by month, the traditions and events that have occurred in our schools,” the letter reportedly continues. “Together we will create guidelines that are safe, inclusive and equitable to be implemented with consistency.”

What was I saying yesterday about the mindless repetition of dogma?

I’m sure Kukenberger felt virtuous writing that letter, but what is she saying?

This would apparently make the education of children a fifth at best.

Kukenberger is also informing parents that she will be working with the elementary principals to decide what traditions have occurred in their schools, in order to create guidelines that are safe, inclusive, equitable, and consistently implemented.

“Educational” doesn’t even make the list. Neither does enjoyable. And parents will not be consulted.

In fairness to the dour-sounding Kukenberger, she did say that Halloween won’t be canceled, just downplayed. And she explained why:

She reportedly referenced groups of students dressing up in similar costumes or some coming to school in elaborate getups – leaving other students who don’t have the resources to do so left out.

“Even if it’s one kid, that’s why some groups are often marginalized,” Patch quoted Kukenberger as saying. “Because they aren’t the majority culture. There’s still lots of other ways for people to celebrate Halloween.”

“There are some people who don’t celebrate Halloween,” Patch also quoted her as saying. “That’ll mean some kids don’t come at all that day.”

Read this bit again: “Even if it’s one kid, that’s why some groups are often marginalized. Because they aren’t the majority culture. There’s still lots of other ways for people to celebrate Halloween.“

What does that mean? What is she saying?

She’s opening her mouth and letting the idiot dogma dribble out without even trying to make it make sense.

She may as well have blamed transubstantiation, economic vibrations, or solar tectonics.

As for the fact that some people don’t celebrate Halloween… so what? It’s an American holiday with no religious connotations. It doesn’t involve American flags, or the slaughter of indigenous people, or incendiaries.

Are we going to cancel all holidays that “some people” don’t celebrate? Because that will be the end of all holidays.

But they’re not canceling Halloween, Greg, just de-emphasizing it to put the focus on a celebration of fall!

You can’t celebrate fall: celebrating seasons is a pagan past-time, and not everyone’s a pagan.

There’s only one logical end point for this kind of stupidity, and that’s to abolish all holidays by declaring every day a holiday. That way every day will be special—in exactly the same special and wonderful way, so that no one is hurt or left out.

So happy Day Day, everyone! And look at the calendar… It’s also Day Day Eve!

The children are going to be so happy!

Heavens forfend that a student might encounter traditions or events that the student is not already fully accustomed to and onboard with! [I also denounce myself for referencing Heaven, as not all students are religious and some are agoraphobic and might be triggered by the reference, and while we are at it, some may hail from landlocked places and would therefore object to the nautical team of being onboard with]

It is weird to recall that back in the 1980s (yes, that was *so* last millennium) when as a teenager from Denmark, I encountered the American school system, no one thought to consider how new and strange traditions such as Thanksgiving, Independence Day, Halloween, Washington’s Birthday, Lincoln’s Birthday, Memorial Day, Columbus Day, Homecoming, the prom and St. Patrick’s Day would be to a student such as I. (to any youngsters reading this, I should explain that this was in primordial times, before Halloween and Valentine’s Day became universal, and back when Martin Luther King Day did not exist, but we had two different Presidents’ days, and kids thought MTV and music videos were new, exciting and really cool)
Everyone seems to have assumed I would either get with the program and enjoy these traditions along with everyone else, or failing that that I would ignore them and leave everyone else to enjoy them.

One might even venture the thought that such traditions were in fact what was special and unique about being in the USA as opposed to being in some other country. Almost as if the variety of traditions was an added attraction, as if it was a good thing that there was such a – what the word? – diversity at play.

Only when everyone is poor and no one can afford Halloween costumes, Thanksgiving turkeys, or Christmas presents will we have true equity. Onward!