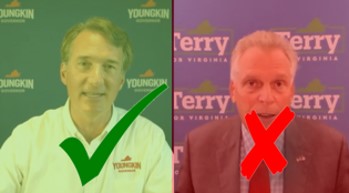 Phrases like “five-alarm fire” and “bloodbath” are being used even by leftist commentators in America to describe the results of Tuesday’s elections. But as far as I can tell to this point, the major Danish news outlets have each run just a single story on the election (not counting wire stories). The stories are candid and straightforward, terse but accurate. They lack the verve and emotion of most Danish stories about American politics. Berlingske’s coverage, however—written up by foreign desk editor Birgitte Borup rather than anyone from their generally woeful stable of American correspondents and “experts”—stood out to me as exceptionally good:

Analysis: He invented a playbook for victory, and it worked. Now Joe Biden is staring into a long, dark night.
Birgitte Borup, Berlingske.dk, Nov 3

Her premise—one shared by many American commentators—strikes me as sober and spot on. Her opening lines frame the story:

They didn’t get it.

In assessing what lay behind Glenn Youngkin’s gubernatorial victory in Virginia, Borup speaks with refreshing and unusual candor: it wasn’t “white rage,” as a lot of American leftists are trying to spin it (and as I had therefore assumed most Danish media would spin it), but a reaction against the Democrats’ entire racialist project:

Glenn Youngkin rode toward victory on a wave of frustration over the school system and a heated debate over the so-called “Critical Race Theory.” In short, the discussion is about the extent to which racial indoctrination must play a role in teaching, and how much influence parents should have on what their children learn in school.

Glenn Youngkin’s victory indicates that parental anger over “white shaming” in education is a political force that Democrats have taken all too lightly.

I can only quibble a little: Democrats didn’t just take that “parental anger” too lightly: they attacked it, and Attorney General Merrick Garland dispatched the FBI to attack it.

She also spends some time in the article explaining how expertly Youngkin threaded the needle of keeping Trumpists on board while casting a wider net. (Although she neglects to mention just how feverishly Youngkin’s opponent, Terry McAuliffe, tried to paint Youngkin as a Trumpist; she notes only that Democrats “did their best to paint (Youngkin) as a ‘Trump in suburban clothing.’ “)

And to top it all off, here’s her penultimate paragraph (my emphasis):

The fact remains that Joe Biden is busy. He’s entering an autumn with a pandemic that the Americans have a widespread reluctance to get vaccinated against. The supply crisis is gnawing, inflation persists, migrants are pouring across the Mexican border, and the culture wars are raging. At the same time, the reforms that are the political foundation of his presidency are stuck in an ideological traffic jam in Congress.

These are among the stories I cited in my post on Monday as missing in action in the Danish media. And I suggested that their absence might not be entirely a consequence of the old “Democrats good, Republicans bad” habit of thinking among the Danish media class, but a result of the fact that these journalists “genuinely don’t understand them. They don’t fit the template for leftish Danish preconceptions about America.”

Borup is actually understating the various crises confronting the Biden administration right now, but she’s bold enough to state that the Virginia result was a “regular humiliation” for Biden, and that it’s “an embarrassing reminder that it’s no longer enough not to be Trump.”

It hasn’t been enough since he took office: you can win office by positioning yourself as the lesser of two evils, but you can’t govern that way—which is why I made fun of the Danish “expert” Mirco Reimer-Elster a month or two ago for saying that for all of Biden’s troubles, he could at least remind Americans that things would be worse if Donald Trump were still president.

“Biden’s outlook was bleak even before the Virginia gubernatorial election,” Borup writes. “Now he’s staring straight into the night, while Republicans have been given a sunshine story and a playbook.”

(It sounds better in Danish.)

I rail against Berlingske routinely for their awful coverage of American politics, most of which is just reworded mush from the New York Times.

So I feel I ought to acknowledge when they’re actually doing it right, as Borup has here. She does a pretty good job of explaining this American political moment to her readers.

Now let’s hope she can explain it to her colleagues and peers.