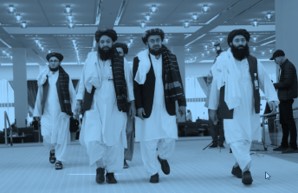 I was startled to see coverage of the conference on a news segment Monday evening. Here were avowed members of the Taliban milling around a conference room in Oslo, doing their best to look earnest and respectable.

“Our visit to Norway has been a success. We’ve achieved a common understanding,” said Amir Khan Muttaqi, the working foreign minister of Afghanistan and leader of the 12-man strong Taliban delegation that arrived in Oslo airport Saturday afternoon on a private plane.

The reason for the meeting is, according to the Norwegian Foreign Minister Anniken Huitfeldt, that the Norwegian government is “extremely concerned” about the humanitarian situation in Afghanistan, where many people are starving.

“It is important that both the international community and Afghans from different places engage in dialogue with the Taliban.”

The “international community.” What is it? Who speaks for it? On what authority? On whose behalf should they “engage in dialogue” with the Taliban?

“We will be clear in our speech about our expectations of the Taliban—especially in relation to girls’ education and human rights—for example, women’s right to participate in society,” Anniken Huitfeldt said before the meetings with the Taliban.

“It was not just talks, but the exchange of ideas for change in Afghanistan. It was good views that were heard,” said Amir Khan Muttaqi at the meeting with the press.

But the Taliban also have other motives for meeting with representatives of Western governments for the first time after taking power.

“For the Taliban, this is a charm offensive to prove that they can carry out the task of governing Afghanistan so that they are no longer associated with terrorism and suicide attacks,” said (TV2 correspondent) Simi Jan.

“It was good views that were heard.”

That’s a pretty good indication of where Huitfeldt‘s expectations are headed.

The meetings have also triggered political criticism from Sylvi Listhaug, leader of the (right of center) Progress Party (FrP) in Norway.

“That Norwegian authorities think it is useful to talk to extreme Islamists about human rights and women’s rights is so naive that it is like believing in Santa Claus and the Easter bunny at the same time,” Sylvi Listhaug wrote in an email to (Norwegian news outlet) VG.

According to the Danish Minister of Foreign Affairs, Jeppe Kofod (S), Denmark has not been invited to the meetings.

“I note that the Norwegian side has publicly emphasized that the hosting of the meetings in Oslo is not an expression of formal Norwegian recognition of the Taliban government. It also reflects the common approach we have in the EU,” Jeppe Kofod has stated in a written response to TV 2.

But it opens the door to an obvious question: what’s the point of the meeting with a bunch of things we don’t recognize as anything more than a bunch of thugs?

If the EU and Norway don’t recognize the Taliban government, what is the Norwegian foreign minister doing with a dozen austere religious scholars in Oslo?

It appears to be a clumsy attempt to use humanitarian aid to bribe the Taliban into not being the Taliban.

If 20 years of warfare wasn’t enough to get them think twice about tossing acid at girls who want an education, what makes anyone think a little cash will do the trick?

In 2001, the Taliban were given an offer: hand over Osama bin Laden and Mullah Omar or else.

They chose or else.

They weren’t being asked to change their religious views, allow girls to attend school, or let women strut around Kabul in miniskirts. Just to hand over two terrorists. And they were willing to let their country be invaded instead.

Long experience tells us that, when they want something from us, they’re perfectly willing to say exactly what the idiots of our phantasmagorical “international commuity” want to hear.

They don’t even work very hard at it: it’s hard to imagine a more non-commital statement than “good views were heard.”

On Saturday a delegation from the Taliban arrived in Norway, where the movement will meet with western diplomats from the United States and EU, among others.

But upon their arrival, they were met not just by waiting diplomats and human rights groups, but also a police report on one of the delegation’s members.

“We have reported him to the police for war crimes and crimes against humanity,” says Norwegian-Afghan Zahir Athari, who has also submitted the report to NRK.

It is 27-year-old Anas Haqqani, an Afghan military commander and leading figure of the Haqqani network, who has been reported to the police. According to Athari, the report is due to the fact that the Haqqari network, which is part of the Taliban, is behind extensive attacks against the civilian population of Afghanistan.

“He and the network are behind some of the deadliest attacks against the civilian population in Afghanistan since 2001. It hurts that he comes here as a respected guest in Norway, instead of being handcuffed and taken to the human rights court,” Athari tells the Norwegian media.

Norway’s Prime Minister Joans Gahr Støre was not in Oslo over the weekend—he was attending meetings with the U.N. Security Council in New York—but he informed Norway’s NRK that the Haqqanis are familiar to him.

The movement and Anas Haqqani have, among other things, been linked to a deadly attack on a hotel in the Afghan capital, Kabul, in 2008, in which a Norwegian journalist was killed and an official from the Norwegian Ministry of Foreign Affairs was injured.

Haqqani’s big brother and leader of the network, Sirajuddin Haqqani, is still wanted by the FBI for the attack.

Five others lost their lives during the attack, and the current Norwegian Prime Minister Jonas Gahr Støre was also present.

“The brother of one of those in Oslo today is the interior minister, with a leading position in the network that’s believed to have been behind the attack in Serena. I was at the hotel in Serena, and it is always hard to hear the name mentioned, but they’re the ones governing Afghanistan today,” he told NRK on Sunday.

“We lost the Norwegian journalist Carsten Thomassen, one of my employees was almost killed, and it was horrible for the rest of us who were there. But the question is, should this mean that those who govern Afghanistan now should not be challenged? I think it’s the right thing to do, even if it’s not easy,” he says of the visit.

“But we must start from the world as it is,” the Prime Minister says, referring to the serious humanitarian situation in Afghanistan, among other things.

“We must look inward and ask ourselves if we can do something to avoid disaster. If the way we do it now challenges those in power, then I think that’s the right thing to do.”

The article makes it clear that the Oslo meetings have “met with criticisms” from within Norway and abroad.

“But in Norway,” Nissen writes, “it’s maintained that the west benefits from the Norwegians inviting the Taliban to the negotiating table.”

“This is a meeting where the United States, the EU, France, and Britain meet the Taliban. But the Taliban must also, for the first time, sit down with representatives of women’s organizations and human rights groups and discuss their demands. We have not achieved this in any other country but Norway,” says the Minister of Foreign Affairs.

We clarified expectations and we made them sit down with activists! Only in Norway could such wonders be achieved, nowhere else, only Norway!

Zahir Athari, who has reported Anas Haqqani, now hopes that Norwegian police will arrest the Taliban leader. At the same time, he calls on lawyers and human rights organizations to help bring a case against the Taliban.

“Norwegian authorities have got to stand on the side of the victims—the Afghan people,” he says.

There was enough support for the Taliban among the people of Afghanistan that they were able to conquer the nation first in the years leading up to 2001, and again last summer.

Any western support should be predicated on a single non-negotiable condition: the removal of the Taliban from power. Forever.

But so long as the Taliban are in charge, let the Afghans enjoy the fruits of the government they chose.