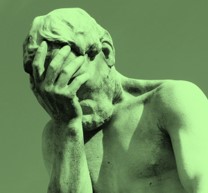 Mouritzen’s signed editorial is mostly an expression of his relief that the “moderates” of the Republican and Democratic parties have wrested control of their parties away from the extremists in their midst: the “Putinists” on the right, and the “left wing” on the left.

Mouritzen is no friend of the Republican party and has never shown much understanding of the American conservative principles that actuate it (see, for example, here), but he’s a respected voice in Denmark so can’t be tossed aside lightly. Indeed, he must be tossed aside with great force. (Hat tip: Dorothy Parker.)

It’s intriguing that Mouritzen doesn’t bother to define his terms on the Democratic side. After telling us that the (imaginary) Putin fans and apologists in the Republican party are being pushed into irrelevance by more Putin-hostile Republicans, he offers only this:

But a rare landslide is happening in American politics. For it’s not only on the Republican side that the more moderate wing is winning.

The center wing of the Democrats has also won over the left wing, so a genuine working congress is coming out of it—a congress that agrees on politics across the middle and isn’t engaged in perpetual internal warfare.

Now there is civil peace the likes of which may not have been seen since the time immediately following the terrorist attacks of September 11, 2001, which was also such a landmark event that Congress cooperated.

The snarky quick response would be to ask what Mouritzen has been smoking.

In the interests of more thoughtful consideration, however, I’ll skip the cheap shots.

I’m even going to ignore Mouritzen’s silliness about the “Putinists” of the Republican party for now, since I’ve dealt with that bit of media dishonesty in previous posts. Instead I’ll focus on the two notions being introduced here: first, that Democratic centrists have defeated the far left of their party, and secondly that there’s a great coming together of America’s two parties underway.

We’ll start with the former.

Mouritzen states that the Democratic center has won over the left wing. He offers no evidence for that hypothesis. Not a single data point. Not even an anecdote. He simply declares it as though it’s something everyone knows.

We’ll probably be seeing a lot more of this kind of talk from the media as we get closer to the midterm elections. Not because it’s true, but because it’s something that they need Americans to believe if the Democrats are to have any hope of not being throttled in November. If there’s one thing we all know about the establishment American press it’s that their overarching objective is the preservation of power in Democratic hands. And if there’s one thing we know about the Danish press, it’s that they happily gobble up whatever the establishment American press feeds them (unless it’s critical of Denmark).

Keep in mind that Biden’s “Build Back Better” omnibus spending extravaganza failed not because it was centrist legislation shot down by a couple of extremists, but extremist legislation shot down by a couple of centrists: Democratic Senators Joe Manchin of West Virginia and Kyrsten Sinema of Arizona. Their opposition to the bill earned them the overwhelming contempt of their party and its media minions: they were accused of betraying not just their party or nation, but democracy itself.

But that was then: two whole months ago, you guys—way before the great victory of the moderates opened the door to the current golden age of unity.

The midterms were still ten months away back in January. Now they’re only eight months away. Polling is bleak for Congressional Democrats, there’s a war in Europe, the nation is still reeling from the pandemic, inflation is soaring, gas prices and violent crime are rising, and Joe Biden’s approval numbers are the lowest they’ve been during his presidency—so far.

Job one of the American media for the next eight months is going to be persuading the American people that none of the problems facing them have anything to do with Democratic control of government, and that anyway the Democratic party is a great bunch of moderates seeking only common sense solutions to the problems of working Americans, and hey look omg you guys a squirrel!

It’s obviously not Manchin and Sinema driving the Democratic party right now: the party is completely in thrall to the extremists they stood up to. Extremists like Joe Biden, Nancy Pelosi, and Chuck Schumer. The President, Speaker of the House, and Senate Majority Leader, respectively. All three of them used to be more centrist, or at least less extreme, but the leftward drift of their party has carried them along with it.

In other words: the power struggle in the Democratic party has been concluded but it was the extremists that won.

Which brings us to the second of Mourtizen’s strange assertions: that we now have a functional Congress working together across the aisle and that Congress hasn’t been this unified since 9/11.

Given the thrust of his piece, one has to assume he’s interpreting the general American consensus to do everything we can to support Ukraine (short of engaging in combat with Russia) as some kind of widespread harmony between Democrats and Republicans in Congress.

Fair enough. But on what issues not related to the war in Ukraine is this great spirit of cooperation evident?

So why is he saying these things? What is he actually trying to say?

Let’s pull back and see if a broader view of this short editorial can give us a clue.

First, the title suggests the piece is about Republicans rising up against the “Putinists” in their midst.

(A quick aside about that: when Democrats oppose war—whether generally or specifically, and whether or not it involves American forces—they’re called “doves.” This is in contrast to people who support the use of military force, who are called “hawks.” But look what’s happening now: suddenly the people who are digging in their heels against any American involvement in the European war are no longer “doves” but “Putinists.” Were people who opposed the war in Iraq “Husseinists?” Were those who opposed the war in Afghanistan “Talibanists?”)

Mourtizen spends a few paragraphs elucidating the popular lie that there’s a core group of public conservatives who support Vladimir Putin and that, thankfully, this war in Ukraine has put them on the defensive. Has got them retreating. Even the Dread Tyrant Trump, he tells us, has begun to backpedal his own “uncritical admiration” (næsegruse beundring) of Putin—and of course includes a link to the deceptive Mikkel Danielsen article that I wrote about in depth a few weeks ago.

Then he gets into the bit quoted above, where he proclaims that Democrats, too, have got their extremists under control, and this housecleaning on the left and right is ushering in a great new era of Congressional harmony.

Next he informs us that this unity can be seen in Democrats and Republicans having “resumed an old war against the White House” to reclaim their Constitutionally-assigned responsibility for declarations of war. Successive presidential administrations of both parties have been pulling that power into the executive branch for decades with the willing complicity of successive cowardly Congresses (also of both parties). The current effort to bring that power back where it belongs is a simple matter of Congress not wanting the Biden administration to get America entangled with Russia without their say so: this could represent a bipartisan determination not to “underestimate Joe’s ability to fuck things up.” (That quote from Obama is the gift that keeps on giving.)

Then Mouritzen takes a surprising turn in his conclusion:

This is quite frankly not a showdown one should undertake while the war in Ukraine is raging. The political issue, which is certainly not unimportant to democracy, must be settled at another time.

We must therfore hope that in this situation Congress is taking advantage of its newfound comity to support the President and not trying to start new domestic political battles and paralyze the US decision-making process.  It can only hurt Western unity.

I’m sort of dizzy, so I want to walk through this slowly to be sure I’ve got this. According to Kristian Mouritzen:

The first point is predicated on a false premise.

The second is offered without evidence.

And the third point is based entirely on the existence of the fourth, which the fifth point then asserts would be bad for the entire western world.

If I’m reading that correctly, Kristian Mouritzen seems to be saying that we’ve entered a glorious new era in which American Congressional unity will be the ruin of the west.