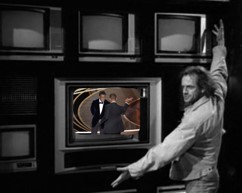 A quick review of the Danish headlines Thursday morning didn’t turn up much political news about America.

Every outlet had a story about Bruce Willis’s retirement from acting, and most had several articles about the fallout from Will Smith’s assault of Chris Rock at the Oscars.  (Politiken ran five on its homepage; Jyllands Posten had an article entitled “Why Chris Rock’s hair joke was especially hurtful.”)

It’s interesting, because on Wednesday the Washington Post reported that it had confirmed through a painstaking verification process that the emails on Hunter Biden’s laptop are genuine.

Strangely, their painstaking verification process was exactly the same process The Daily Caller applied back in October 2020.  Contrary to what the Post is trying to say, none of their findings are new.  All of the information they’re now acknowledging (and a great deal of additional information they’re not yet acknowledging) was known in October 2020.

The big story isn’t that the Post and the Times have come around to what anyone willing to look at the facts knew 17 months ago: the big story is the systemic rot made irrefutably plain by their having done so.

To acknowledge the legitimacy of this story is to recognize that the entire American establishment knowingly and deliberately misled the American public for the sole purpose of getting Joe Biden elected.  Not only by presenting false information, but by working actively to suppress the truth.  “The establishment” includes the current president, his campaign, his party, 51 former intelligence officials, the media, big tech, and anyone else that either insisted the story of the laptop was “Russian disinformation” or sought to prevent people from saying otherwise.

Are they repentant? Of course not. Why should they be? In the famous words of Harry Reid, when he was finally called out for lying about Mitt Romney’s taxes (but only after Obama had defeated him in the election), “It worked, didn’t it?”

The conclusion is inescapable: the establishment is corrupt from top to bottom.

And it’s something Danes interested in America ought to know.

I realize there are only so many column inches that can be devoted to America on a Danish website, but maybe Politiken could have settled on just four stories about the Smith-Rock fracas and dropped the fifth in favor of a word or two about all this. Maybe Jyllands Posten’s explainer piece on the hurtfulness of bald jokes could have waited a few more days.

My best guess, based on all the empirical data, is they’re trying to figure out a way to report on the story without making Democrats and the American establishment media look bad.

If so, it’s probably going to be a very long time before we hear from them.