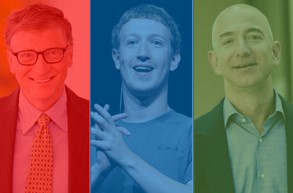 Let’s talk about those sinister oligarchs we keep hearing about.

Let’s talk about the men—they’re all men—of vast wealth who control whole industries and exist in perfect symbiosis with their regime: a regime that grants the oligarchs regulatory favors so they can make more money, in return for which favors the oligarchs throw the full weight of their far-reaching influence behind the regime.

By all means let’s talk about them; it’ll be a nice break from talking about the Russian oligarchs.

Not quite two weeks ago the Danish science website videnskab.dk (videnskab is just Danish for science) published a translation of a paper from theconversation.com (which is an academic website) entitled “Meet Russia’s oligarchs, a group of men who won’t be toppling Putin anytime soon.”

I don’t know why that’s a science thing, I just know that “science and research” no longer mean what we grew up thinking they meant.

The author, Stanislav Markus, is an Associate Professor of International Business at the University of South Carolina. He writes, “As a scholar of emerging markets, corporate strategy and the post-Soviet political economy, I have studied the oligarchs in depth.”

(Full disclosure: I myself am not a scholar and have spent very little time thinking about or even paying attention to emerging markets, corporate strategy, or the post-Soviet political economy.)

But when Markus describes the oligarchs as “the ultrawealthy business elites with disproportionate political power,” it’s impossible not to think of the aforementioned oligarchs of America.

Ours are obviously better, right? I mean, they’re American! Our oligarchs have to be better.

Markus says the Russian oligarchs “helped Putin stay in power through their political quiescence and economic support of the Kremlin’s domestic initiatives.”

So… they go along with the ruling autocracy and support its initiatives economically. Interesting.

He says the Russian oligarchs “used their wealth – in terms of jobs, loans or donations – to influence politicians in other countries.”

He says that although he can’t actually prove it, “there is strong anecdotal evidence that oligarchs’ financing facilitates the adoption of pro-Putin positions in countries outside Russia.”

They splash money around in foreign countries and it redounds to the benefit of the ruling autocracy. Extraordinary!

Furthermore, my research on the concealment of corporate political activity suggests that using ostensibly nonpolitical intermediaries such as private companies is a key strategy through which organizations like the Kremlin can hide their political activity.

Those Russian oligarchs sure are a wily and dangerous bunch. I get scared just thinking about them.

It’s good we’re all being instructed to punish and despise them. . . by the media owned and controlled by our good American oligarchs.

That was a light and jaunty way of making a serious point: the professional pontificators of our western media have in fact been talking so much smack about the Russian oligarchs for so long they often neglect the national modifier.

“The oligarchs,” they intone, as though struggling just to get the hated word out of their mouths.

Yes, yes, the oligarchs. The Russian supervillains, those billionaires and trillionaires with their jewel-encrusted yachts, those shadowy figures washing their asses in the solid gold bidets found in every bathroom of their palatial penthouses in London, New York Paris, Tokyo.

They’re terrifying. They’re like Keyser Soze meets Don Corleone meets Nelson Rockefeller meets Ernst Blofeld, all squished together into something that looks like Boris Badenov and smells like vodka.

(Some people even say they’ve got fangs, spit poison, and can see in the dark. I’m not so sure about that, but you never know.)

We accept all that in our knowing, jaded way.

The Russian oligarchs. Damn them! Can’t we find some way to hurt them even more?!

Except the American oligarchs have more money, more domestic power, and more international power than anything the Russian oligarchs could dream of.

And we don’t even call them oligarchs.

Because our media can’t.

Because as we saw in October 2020, our media can be suffocated with the snap of an oligarch’s finger.

You know why Congress can’t figure out how to bust up the monopolies of Facebook and Twitter? Because they’re terrified of them. Because an oligarch can point his money like a firehose at anything he wants, at any time, to get whatever he wants.

Would a million dollars change your mind? A couple of million?

Mark Zuckerberg probably has the money required to buy your change of heart in the cracks between the cushions of his favorite sofa.

And if money doesn’t do it, how about a little tweak to a few algorithms to ensure that everyone in the world is made aware of your deepest, darkest, and most shameful secrets?

Ready for your mom to find out how much you spend on OnlyFans?

For your spouse to find out about that thing you did back in the 90s?

For your colleagues to read what you wrote in your high school yearbook?

For the whole world to see that picture?

Say whatever you want about the Russian oligarchs, I’m not defending them.

But let’s at least be honest enough with ourselves to acknowledge that with respect to our own freedoms, and freedom in general, the American oligarchs are at least a couple of magnitudes of order more dangerous.

And here’s the acid test: if our own oligarchs actually give a damn about freedom and democracy, what the hell are they doing in China?

(Making money, I know. I’m not an idiot. They’re making lots and lots of money in China. Because that’s what freedom-loving, democracy-defending oligarchs do.)