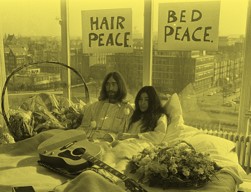 The big news over the weekend was the lack of assaults at the Grammy Awards.

Ukrainian President Volodymyr Zelensky stunned the Grammy Awards on Sunday night with a surprise message in which he told the audience to “fill the silence with music.”

DR has roused itself to meet Zelensky’s challenge: they’ve prepared a list of five iconic songs about war for their readers.

Here’s what Zelensky asked for in his pre-recorded message to the millionaires gathered to honor one another for their excellence:

On our land, we are fighting Russia which brings horrible silence with its bombs. The dead silence. Fill the silence with your music. Fill it today to tell our story. Tell the truth about this war on your social networks, on TV. Support us, in any way you can. Any–but not silence. And then peace will come.

I’m not sure I follow his reasoning, but he certainly knows his audience: you’ll notice he didn’t invite any of them to come to Ukraine and join the fight. (It would have been a nice nod to circumstances if he’d channeled John Lennon’s comment to the audience when the Beatles played at the Royal Variety Performance in 1963: “Those in the cheaper seats, clap. The rest of you rattle your jewelry.”)

As well as he knew his audience, DR knows theirs even better.

Can you guess the five songs about war they recommend? I bet you can guess at least two of them.

Before we get to them, I want to note for the record that I wouldn’t mock the idea that music has a role to play in times of war, even among non-combatants. One of the most powerful scenes in Casablanca is entirely musical:

The Marseillaise is a rousing song—and a martial one.  If you’ve only ever heard the words in French, have a look at them in English:

Arise, children of the Fatherland
Our day of glory has arrived
Against us the bloody flag of tyranny
is raised; the bloody flag is raised.
Do you hear, in the countryside
The roar of those ferocious soldiers?
They’re coming right into your arms
To cut the throats of your sons, your comrades!

To arms, citizens!
Form your battalions
Let’s march, let’s march
That their impure blood
Should water our fields.

If it weren’t so French it would be perfectly appropriate for Ukraine right now.

So appropriate, in fact, that you might even be thinking it’s one of the songs recommended by DR.

But only if you were unfamiliar with DR.

The fact that that people interested in freedom sometimes need to hear a song like the Marseillaise is entirely beyond the point: DR doesn’t exist to serve the citizens of Denmark, but to promote its own ideology.

Unsurprisingly, then, here are the lyrics to the first song they recommend—and I suspect you saw this coming:

I assume I don’t need to cite the artist or song title.

Now, which of the two songs would you find more helpful as a civilian in Ukraine right now?

The song that rouses you and your countrymen to rise up and take the fight to the invaders who have come to kill you, or the song that doesn’t ask you to do anything more strenuous than “give peace a chance?”

One is a call to action, the other a lullaby.

Many westerners seem to have a hard time accepting that it’s sometimes okay love your country and want to defend it, and therefore sometimes even necessary to kill people.  For example, people who are invading your country, blowing up your buildings, and killing your friends and family and neighbors.

Those are the sort of people who not only deserve to be killed, but must be. People who, in the formulation of the old American frontier, want killin’. The Russians invading Ukraine right now are among them.

If they don’t want to be killed, they can get the hell out of Ukraine.

John Lennon and Yoko Ono had been together in the mission for world peace for decades, until the assassination of The Beatles’ lead singer in 1980.

In 1969, they held some so-called bed-ins (among other things) for peace in Amsterdam and Montreal as part of their non-violent protests against war. They invited in the press while lying in bed protesting for a better world.

Note that even DR acknowledges this isn’t a song about liberating your country from an invading army: it’s an anti-war song. Being anti-war is well and good, but in this case it’s akin to cursing the dark instead of lighting a candle.

If you think the anti-war premise of their first pick was just an editorial oversight, their second pick is Springsteen’s Born in the USA. That’s another deeply anti-war song, but it has such a rockin’ melody that misguided Americans have sometimes tried to claim it as patriotic: they hear it as a celebration rather than a condemnation of America. But Springsteen’s point wasn’t “I was born in the USA, fuck yeah!”—it was more along the lines of, “I never caught a break and the fuckers threw me and my buddies into the meatgrinder to go kill yellow people for no good reason I could ever figure out.”

Is DR suggesting that the working class citizens of Ukraine are being manipulated by that country’s elite to fight a pointless war? Even if they are, and I doubt it, why do it with a song that’s literally and explicitly about America?

“For the song is not about a pride in being American. The song is more about the humility you have to have when you are a warring country,” says Carsten Holm.

The third song sustains the anti-war theme and is an even weirder selection: it’s Sting’s Russians, which the artist apparently intends to re-release (or has already re-released) in an acoustic version for the current crisis.

What makes it so weird is that this isn’t just any old anti-war song, but one from a very particular moment in time: the moment when Sting realized a nuclear war between the USA and USSR would be very bad for his own little boy—and probably for Russian children as well.

“Between the lines, the song says that we are all human beings of flesh and blood, and that there is no reason to fight each other,” says Carsten Holm.

No reason at all. Ever. People of Ukraine, lay down your arms!

Sting heaps scorn on Khruschev and Reagan equally in the song, as though there were no difference in what the men or their countries were after, or what they represented. Do you think he feels the same about Zelensky and Putin?

And these days, does anyone even care if the Russians love their lousy children? I mean, they’re Russian! That’s like one step down from Orc.

The fourth selection is yet another anti-war screed: Brothers in Arms from Dire Straits, who wrote it to express their unhappiness with the Falklands War.

“The group thought it was completely insane to go to war and send young people into battle so far away from home,” says Carsten Holm.

It is indeed insane that Russian young people are being sent into battle so far away from home: would it be so wrong to give the Ukrainians a little encouragement to send them back?

DR’s final selection is Where is the Love, by the Black Eyed Peas. Another American anti-war song, repurposed as an anti-racism song, and now force-fed into the current propaganda effort.

And we already know you think America is bad. (Really, really bad.)

But given the circumstances, even you should have been come up with something better than a generic anti-war playlist.

This is the part of Sprockets when we dance.

And when I say Sprockets, I mean this blog post.

And when I say we dance, I mean I wax philosophical for a moment on what the hell is wrong with us as a civilization.

Notice that when Laszlo starts singing the Marseillaise in Rick’s café, nobody takes a knee.

You’ve got uniformed Nazis singing The Watch on the Rhine (“Dear fatherland, no fear be thine, / Firm and true stands the watch, the watch at the Rhine!”), ultimately drowned out by civilian Allied nationals singing the Marseillaise (“Let’s march, let’s march / That their impure blood / Should water our fields”), and not a soul rises to point out that all war is bad and everyone should just lay down their arms and be friends.

Which is nevertheless the point of every song selected by DR.

Will a single western musician, do you think, release a rousing martial song to inspire the Ukrainians to remain steadfast and valiant? To urge them on to purge their motherland or fatherland (or birthingpersonland) of the Russian invaders? To steep their soil in the blood of the enemy?

It is so gallingly and maddeningly easy to oppose war.

But does no one outside of Ukraine have the balls to acknowledge that some fights are just—and not only deserve but actually require the kind of rousing songs that have been inspiring people to keep their nerve and hold their heads high for as long as wars have been fought?

The civilization that would create songs like the Marseilleaise, Battle Hymn of the Republic, or Kong Christian Stod ved Højen Mast, is apparently long gone.

You’d think there’d be at least one upstart garage band willing to take the risk with a song like “I wanna big pina colada / to drink outta Putin’s skull” or something. Or even some ageing 80s or 90s thrasher band trying to reclaim some relevance. It’s insane that with everything going on our musicians can’t come up with anything better than “war is bad, don’t do war.”

Well, there is plenty of rap music that glorifies shooting and killing (cops), and there is no doubt some heavy metal out there with militant lyrics, but these days if Hollywood is looking for stirring music, they mostly go to the 70s or 80s (such as Led Zepplin’s Immigrant Song in Thor Ragnarok, or practically all the pop/rock music in any James Gunn movie), because Gen X nostalgia is apparently the current vein to tap.

But of course, even if your garage band were to try it, they would not stand a chance with the establishment media, and so we get a society that considers Lennon’s Imagine to be deep and profound art.