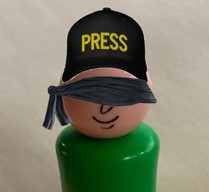 Danes who rely on Danish media for their understanding of the world still don’t know that the same “news” outlets that declared Hunter Biden’s laptop to be a Russian operation back in the weeks before the 2020 presidential election have at last acknowledged its authenticity.

Firstly because not one of these outlets has offered a credible explanation for their not having made the acknowledgment back when the story broke in 2020.*

Secondly because the contents of that laptop are deeply troubling.

One could argue (many people are trying to argue) that even if everything that’s been made public so far is in fact entirely genuine, then the most we can say with certainty is that Hunter Biden is a disgusting human being and that his financial dealings with foreign countries and companies warrant a very thorough-going over—and that the actual involvement of his father is at this point merely conjecture. Highly probable conjecture, but conjecture just the same.

It’s a fair argument but it should have been made in October 2020 rather than the spring of 2022. The delay itself only adds to the incriminating aura of the laptop and its contents.

The New York Post published their first blockbuster story about the laptop on October 14, 2020.

Five days later, on October 19, the 51 former intelligence officials issued their a public statement declaring that, although they had absolutely no actual knowledge of the case—hadn’t seen the laptop or its contents, hadn’t interviewed anyone who had—they suspected Russian government involvement. That was their vetting and fact-checking: they could feel it in their gut!

Their “conclusion” was seized on by the entire establishment as proof that the whole thing was a Russian op. Leftist politicians and media dismissed the story by saying “intelligence officials have said it was Russian disinformation.” (Which was itself a lie: the public letter offered only feelings and suspicions, alongside an open acknowledgment of the officials’ complete unfamiliarity with the evidence.) Big tech used the intelligence officials’ statement to entirely suppress the story on social media. Danish media’s coverage of the story largely revolved around Republicans’ anger over the suppression of the story, without ever bothering to inform their readers what the story actually was.

Meanwhile, former Biden business associate Tony Bobulinski, someone with an easily verifiable history of being human, American, and a former Biden business associate, went public in a broadcast interview on October 27 to confirm that the emails being cited the post were genuine. He had been cc’d on them and could vouch for their authenticity. Rather than spur more energetic investigation of the story, Bobulinski’s claims provoked an entrenchment: instead of digging deeper into the story, which now had a corroborating source, the establishment media chose to emphasize the Biden campaign’s denials and, in a perversely circular logic, the fact that “credible” news organizations had not verified the claims of Bobulinski or the contents of the laptop.

In what other public or private case that you can think of are a defendant’s claims of innocence held up as evidence not just of innocence, but of the charges themselves having been fabricated?

What other public or private case have you seen any media outlet ignore simply because it hadn’t yet been run by another media outlet? (Doesn’t the very logic of that mean a “scoop” would be the very last thing a news organization would ever want?)

At this point, the concession that the laptop and its contents are (and always have been) real and authentic is an acknowledgment that virtually the entire American establishment colluded to suppress a story that certainly would have been damaging to the Biden candidacy.

One of the arguments simmering in American political circles right now is whether or not that story, had it not been so aggressively suppressed, would have been enough to alter the 2020 election results (as I noted in a previous post, this is a variant of the “what difference, at this point, does it make?” stratagem).

It’s an interesting question, but it’s also a distraction from the two key questions I noted above. It doesn’t address them at all.

Whether or not the story would have changed the election, the leftist establishment behaved as though they feared it might. Whether or not Joe Biden is guilty of influence peddling is equally irrelevant in assessing the behavior of the American establishment.

I’m a junkie. I need a hundred bucks for my next fix. You look like you’ve got a well-stuffed wallet, so I try to mug you. A cop catches me in the act and arrests me.

World-renowned blogger that I am, speculation runs rampant: am I really a junkie? Was I really trying to mug you?

To what extent are those questions addressed by asserting that you didn’t have a hundred bucks in your wallet anyway?

What has that got to do with my dependence on heroin, or my having dragged you into an alley and whacked you over the head with a crowbar?

But that’s all we’re hearing from the mainstream media: the story, in Anne Applebaum’s estimation, isn’t even relevant or, god help us, interesting because you didn’t have a hundred bucks in your wallet.

Am I junkie? Irrelevant.

Did I whack you? Uninteresting.

Did former intelligence officials deliberately mislead the public for political purposes? Did the media suppress a story for partisan reasons? Did Big Tech deliberately promote a falsehood and block the truth? Irrelevant and uninteresting because it probably wouldn’t have affected the election.

Which is grotesquely perverse because whether or not it would have affected the election, wasn’t the story’s suppression entirely grounded in fears that it could?

“What difference, at this point, does it make?”

The Danish media don’t need to share my interpretation of these events, but they owe it to their readers to lay the relevant facts before them.

I’ve said it before and I’ll say it again: America’s ruling class—the establishment, the anointed, the elite, the cathedral, the machine, whatever you want to call it—has revealed itself as corrupt from top to bottom. Much more corrupt than I’d have believed a few years ago.

The former intelligence officials who signed a public statement expressing their opinion on something they knew nothing about are corrupt.

The Democratic party politicians and apparatchiks who dismissed the story as Russian disinformation are corrupt.

The media who amplified that narrative are corrupt.

The technology companies that suppressed the story while promoting the lie that it was disinformation are corrupt.

* Footnoted because I didn’t want to bust up the flow of my logic, but I did want to stress the emphasis on credible: these outlets are blaming their delay primarily on the need to fully vet the stories. You know, with their legendary layers of fact-checkers, who appear to be more myth than legend. No word on the whereabouts of those hard-vetting fact-checkers last week, for example, when the entire American establishment began hyperventilating about seven “missing hours” from the January 6, 2021 White House phone log—despite the fact that the most cursory “fact check” would have confirmed that there wasn’t a single minute missing from the White House phone log on that date. Also, the methods that the Washington Post says it used for its “verification” of the emails (we hired crypotologists and used math!) are the same that were used by the Daily Caller in October 2020. It wasn’t fact checks or vetting that were wanting, but the will to carry them out.