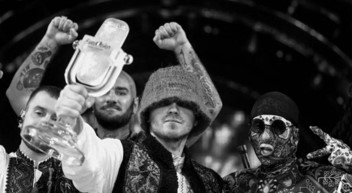 To nobody’s surprise, they racked up the most points of any country in the history of the competition.

To my own surprise, however, the Danish media have been very transparent about the fact that the Ukrainian song wasn’t very good and that this was obviously a pity win for Ukraine. They also acknowledged that Eurovision victories are of limited military use: one Danish article about the event even began with a snarky “Take that, Putin!”

It’s heartening to see that although we’re apparently all prepared to lie to ourselves and one another about so many things these days, for once we’re at least allowed to acknowledge that we’re doing so. Honesty about our dishonesty strikes me as a salubrious step toward sanity.

Imagine if our cultural overlords said, “Obviously men can’t get pregnant, but there are women out there who simultaneously want to pretend they’re men and have babies, so why not just kind of humor them?”

Or, “This guy over here’s obviously not a chick, but he’s a mediocre swimmer and winning’s really important to him, so we’re gonna pretend he’s a girl and let him win a few medals.”

Or, “Sanctions didn’t do a goddam thing to get Russia out of Georgia or the Crimea just a few years ago, but we’re gonna pretend they’re really effective so we don’t have to get ourselves tangled up in a military confrontation with Russia.”

Or, “Joe Biden’s obviously operating on a diminished mental capacity, but if we don’t pretend he’s on top of his game it might embolden America’s enemies… and Donald Trump.”

Or, “Most masks aren’t very effective against Covid and most people don’t wear them right anyway, but it’d be a really good symbolic gesture if everyone had them on all the time, so we’re gonna pretend they’re actually useful.”

Or, “We’re decades away from being able to meet our energy needs with renewables, but the environment is so important we have to stop using fossil fuels right away—so let’s just pretend we can do whatever we want and there’ll be enough energy anyway.”

Or, “Yeah, yeah, it’s just a canvas covered in paint spatter, but the artist says it represents a spiritual howl of anguish against the soul-crushing burden of capitalism, which is a really clever thing to say, so we’ll play along and make it part of the museum’s permanent collection.”

Or, quintessentially: “That guy is completely bare-assed naked, but he’s our emperor and he thinks he’s dressed to the nines, so we better pretend he looks great. And for god’s sake—shut that kid up!“

Being lied to by our political and cultural institutions isn’t pleasant when we think we’re expected to believe the lies. The lies are too stupid: it’s an insult to our intelligence to have to pretend we believe such nonsense. It would therefore make a big difference to many of us to be reassured that these are just fictions we’re being asked to play along with for some greater good.

Then we could at least have an honest conversation about what is and isn’t for the greater good.

We could say, for example, “I’m perfectly content to pretend our emperor is attired in the finest raiment if it’ll make him happy, but could we discuss the significance of his apparent inability to tell the difference between real and imaginary clothing?”

That’s the fairy-tale version, obviously; in real life it would more likely go something like this:

“Sure, I’ll call the nice lady with a baby’s head crowning out of her vagina a man if that’s what she wants, but can we discuss the mental health of someone who simultaneously wants to pretend they’re a man and give birth to a baby?”

Because we all know that’s not something men actually do. It’s not even something on which we can politely agree to disagree: if you think a man can get pregnant, carry a baby to term, give birth, and breast feed, there’s nothing to discuss. You’re either lying to yourself or you’re bonkers.

So it’s therefore a wonderful step forward to know that we’re being permitted to acknowledge that the Ukrainian Eurovision entry didn’t deserve to win on the merits but was given the win by a public that wanted to do something nice for the beleaguered Ukrainians.

How long until we can freely acknowledge all the rest of the bullshit?