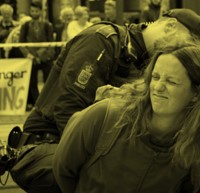 She was an infant when Mohammed Atta and friends darkened the bright clear September morning I’d awakened to in New York in 2001, a toddler when the Third Infantry Division rolled into Iraq. She would have been in first grade during the Danish Cartoon Crisis; a young teenager during the Copenhagen terror attacks of 2015.

I’ve lived in Denmark for most of her life—almost certainly all of it since she stopped wearing diapers—and therefore know first-hand the world in which she grew up. Were we to seat ourselves sultanically among the moons of Saturn, and take high abstracted Terese alone, we should consider her a blessed creature, as fortunate in the time and place of her birth as any human ever could hope to be. To be born and raised and in one of the happiest and most affluent nations on earth!—what more could any unborn soul wish for?

Come back down to earth and ask her:

I got arrested for the climate because I don’t see any other solution
Terese Hauschultz (Opinion), Berlingske.dk, 17 May

My heart genuinely goes out to her, and to others like her. They have, as their grotesque avatar Greta Thunberg accurately insists, been robbed of their childhoods. It’s the one thing on which Thunberg and I are in complete agreement.

But the people who “stole their childhood” aren’t the meanies “despoiling” the world with all their damned affluence, food, and medicine, but the Apocalypticans who’ve brainwashed them with fear and trembling.

There are only a few situations where it can be justified to break the law. But when we are in a climate catastrophe with only three years left to solve it, and the politicians show no sign of taking real action, then this is one of them. I have lost confidence in politicians and lost confidence in Danish democracy. Civil disobedience is the only resort.

Terese’s too young to have built up an immunity to these dire forecasts, which have been issued routinely for more than half a century: just plucking one example from the veritable cornucopia of idiocies, when Terese was about five years old, climate guru Al Gore warned the attendees of the COP-15 summit that the northern polar ice cap would “disappear in 5 years.” It did no such thing. It was there when Terese turned 10. And 15. And 20. And it’s still there.

Her lack of confidence in politicians is well deserved: they’re the ones who’ve allowed this gloomy nonsense to fill her little head. Hell hath no fury like an activist betrayed, however: at some point, Terese and millions like her are going to wake up to the con, and may God have mercy on the broken, twisted souls that brainwashed them.

I am one of the hundreds of activists who this week have blocked bridges, roads, and ministries throughout Copenhagen. During the week of action, I’ve been arrested several times. The actions were part of the action week “Turning Point,” which was organized by Extinction Rebellion Denmark in collaboration with many other green organizations. I didn’t let myself be arrested because I think it’s fun. But because I think it’s necessary.

The support for “Turning Point” has been huge, from the drivers who have supported us even though they were stuck in (the traffic we caused), to the author Carsten Jensen, who himself was arrested. But there are also some who have been critical or even angry. It is to you, I address this post.

Oh. She’s talking to me.

I have only just turned 22 and have grown up in a world where the climate crisis is a reality. A world where UN researchers say famine, drought, wildfires and refugee flows will cause societies to collapse. Of course, I have taken action in my own life: I don’t eat meat, don’t fly, don’t buy new, and I could go on. But it doesn’t take very long to realize it’s not enough. Because in the meantime, those in power have done nothing but talk, so we must convince them to act. And it’s proven to be a difficult task.

I was being sincere when I said my heart goes out to Terese and her friends. A generation of swine has convinced them that the world is ending unless they live joyless lives of frugal monkish misery. Get on a plane, Terese! Fly off to a Mediterranean island and tuck into a grilled rib-eye, and wash it down with a local wine. Have a torrid romance with a local boy. (Or girl; I’m not judging.) Buy yourself some nice things. Treat yourself well. Enjoy your life! The world will survive the worst we can do to it, but you get only one life and are young for only one small part of it.

Do you know why those in power have done (mostly) nothing but talk? Because the world’s not really going to end and they know it. Has Al Gore stopped flying? Has John Kerry? Have they reduced their own oversized carbon footprints one damn millimeter? Did you know the Obamas bought a waterfront home on Martha’s Vineyard? Who buys waterfront property if they genuinely believe the oceans are rising precipitously?

Maybe you’re one of those people who claims that breaking the law and blocking the way does no good for one’s cause.

But civil disobedience is nothing new. We didn’t get all the rights we have today by asking nicely. We got them through fierce struggle and in many cases through the use of peaceful civil disobedience. The politicians didn’t give us 37-hour work weeks and women the right to vote without an extra push from the population.

Using the same tactics doesn’t give you moral or intellectual equivalence.

Should I get out there and start disrupting civic life to push for lower taxes?

Should every idiot in Denmark start disrupting everyone else’s lives to advance their own pet cause?

It’s the golden rule, the categorical imperative. Act as though your actions would—through your will!—become universal laws. If everybody were as damn cocksure about their own half-baked beliefs as you are, society would grind to a halt from all the principled civil disobedience.

I have even heard some say that it is undemocratic to block a road to fight for a cause.

If you belong to this group, you may have forgotten what democracy is all about. The Constitution is not only about the Folketing and representative democracy, it is also about freedom of assembly. When we stop using this right, democracy has failed.

People are wrong to say it’s undemocratic: its not. It’s illegal. It’s illegal because we in our democracy have agreed that preventing other people from going about their own business is unfair and unjust. You may feel your cause justifies the “inconvenience” of a traffic jam—but, again, if everyone felt that way, where would we be? How could anyone, ever, get anything done? (And to someone in the middle of a heart attack, a delayed ambulance may be more than merely “inconvenient.”) The right to assemble is not “the right to stop other people from doing things.” If it is, how would you feel if a group of counter-protestors encircled your own group and prevented it from going home when all your fun “rebelling” was over and it was time to head out for your tofu-burgers and carrot juice?

Politicians do not intend to voluntarily create climate justice if it is to affect Danish industry and growth. And it’s going to affect industry and growth whether we get climate justice or climate disaster. Believing that politicians will solve the climate catastrophe requires an endless struggle to keep believing. We must expand democracy, give power to the citizens, and rebel when politicians fail. Peaceful civil disobedience is a legitimate tool in this fight. It gets hard, exhausting, frustrating and at times hurtful, but we keep going.

To say that industry and growth are going to be affected whether we get “climate justice” or “climate disaster” is probably true—but the world is not an either-or scenario: we’re not in a superhero movie with a ticking bomb that’s going to level Manhattan unless our superhero can defuse it in time.

We’re in a world with an unpredictably changing climate (if you chafe at “unpredictably,” kindly provide a climate prediction from, say, 1990-2010 that has so far proved entirely accurate). Some of these changes may be a boon to mankind, others may be a pestilence. But we have seen that many of the steps we have taken toward “climate justice” have had negative consequences of their own. (The current, very serious food crisis in Sri Lanka was brought about by zealots pushing “agricultural justice.”)

What does it mean to “expand democracy?” What power do the citizens lack? And when you say we must rebel when politicians fail, is that a universal imperative, or something reserved only to those who share your own beliefs? Yet again: when politicians fail to lower taxes, are you saying I “must” rebel? By messing with your daily routine? Would you be “undemocratic” for disagreeing?

This democracy you talk so much about but clearly understand so poorly is founded on the principle that we don’t always all agree on everything—in fact, we never do—so we must build social and political structures that enable us to develop rational compromises among people with competing beliefs. If you don’t like that, you really need to stop preaching about democracy.

Are you going to join?

But don’t feel your words have not affected me: I am now angrier than ever at the activists and politicians who’ve convinced you that you have no future. You have been brainwashed and manipulated. You are a child, not much older than my own daughters, and I’m sad to see you robbing yourself of a happy youth due to the political programming of some hysterical hacks.

You have indeed been robbed of your childhood.

The real “climate justice” is what needs to be visited upon the people who stole it.