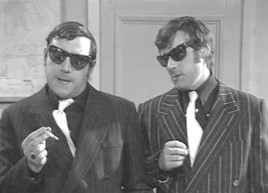 The EU wants to punish Russia for invading Ukraine by blocking all imports of Russian oil into the union.

Toward that end it developed a sixth package of economic sanctions against Russia, and this package includes what would amount to an official oil embargo: a European ban on the import of Russian oil.

Hungary has categorically refused to cut themselves off from Russian oil: as a landlocked nation with few other options, they’r especially dependent on it. They’re not the only country uncomfortable with the embargo, but they’re apparently the most recalcitrant.

The EU has offered to offset Hungary’s pain with financial compensation, and has also offered to allow Hungary and Slovakia to continue importing Russian oil through 2024. Negotiations are ongoing.

But the darling of the world, Volodymyr Zelensky, is getting impatient.

Analysis: It could get awkward for Mette Frederiksen & Co. when they patch Zelensky through to Brussels
Solveig Gram Jensen, Berlingske.dk, May 30

The gist of it is, Zelensky is so impatient for this oil embargo to be applied that he’s hinting at taking matters into his own hands:

According to the European online media Politico, (advisor to the Ukrainian energy minister and a former deputy foreign minister) Olena Zerkal said that Ukraine has a fantastic means of blackmail: part of the pipeline that brings Russian oil to Hungary runs through Ukraine.

The pipeline is called Druzhba and has been able to transport Russian oil through Ukraine to Hungary, despite all the disturbance.

“Something could happen to it. And in my opinion, it would be very appropriate if something happened to it,” Zerkal said.

The Politico article is here. Besides quoting Zerkal as talking about “a wonderful lever in its hands” rather than the “fantastic means of blackmail” reported by Berlingske, it includes a quote from Zelensky that doesn’t appear (entirely) in the Berlingske article:

“Look at the number of weeks the European Union has been trying to agree on a sixth package of sanctions against Russia,” Zelenskyy (sic) said in his video address last night. “Of course, I am grateful to our friends who are promoting new sanctions. But where did those who block the sixth package get so much power? Why are they still allowed to have so much power, including in intra-European procedures?”

They got their power from the EU constitution. They’re allowed to have power in intra-European procedures because—and hold onto your hat for this—they’re members of the EU.

I’m especially intrigued by the line “Why are they still allowed to have so much power?”

That’s a hell of a thing to say. “How can they block something we want and still have power?”

This is unbecoming of Zelensky, which is about the mildest way of putting it. Whatever he thinks of Hungary, whatever anyone thinks of Hungary, it’s a member of the EU. To unilaterally cut off its oil might not qualify as an act of war (although it certainly could), but it would certainly count as a something that geopoliticians refer to as “a dick move.”

I doubt the Eurocrats of Brussels will see it that way, however: Orban has always been a thorn in their side, and they probably enjoy watching Zelensky make him squirm.

But it’s not Victor Orban who pays the price of a unilateral Ukrainian action against “his” oil supply: it’s the Europeans of Hungary. And if I’m reading this map correctly, and it’s accurate, it looks as though the Druzhba pipeline also serves Slovakia, Czechia, and Croatia. They’re also in the EU. A threat against four member states of the EU isn’t something to brush off lightly.

I assume a compromise will be found: something that hits Russia hard but also ensures Hungarians, Croats, Slovaks, and Czechs don’t freeze to death next winter.

But I think Berlingske’s characterization of Zerkal’s implied threat is spot on: the Danish word Jensen uses is afpresningsmiddel. Afpresning is blackmail, middel is means. Means of blackmail. Which is exactly what Zerkal is saying: “Nice little oil pipeline you’ve got there, eastern Europe. Be a shame if anything were to happen to it. Nudge nudge, wink wink.” (Yes, I’m concatenating two Monty Python skits, sue me.)

It needs to be made very clear to Ukraine, without mincing a syllable, that blackmail leveraged against an EU member state will not be tolerated.

Because we have some powerful levers in our hands, as well: money, weapons, supplies, medicine.

How about instead of issuing threats against your allies, you fire Olena Zerkal and apologize for her imprudent and impudent remarks? Otherwise… well, that’s some nice aid you’ve been getting, Ukraine. Be a shame if anything were to happen to it.

That, I think, is how a sober and serious EU would react.

If only there was such a thing.

A sober and serious EU? As if.

It will be illuminating to see if the checks and balances of the EU system (such as they are) will be able to put any significant obstacle in the way of the unelected bureaucrats acting out according to their deeper desires; They loathe Orban and Hungary, they adore Zelensky and if Zelensky is unfortunately at the moment displaying full frontal dictatorial tendencies, one suspects that many of the EU-elite secretly agree with his sentiments: Why should people be allowed to be so annoying?

As you note, someone ought to smack Zelensky on the head and remind him: “Just because Putin is a thug and a villain, does not automatically transform you into a saint. Your heroic resistance since Feb 24 have provided you with a nice, shiny metal suit of virtue covering up most of your past sins, but statements like the one about the people blocking your wishes will quickly rust that suit away to nothing. So knock that shit off!”

Incidentally, you actually concatenated three Monty Python skits: The headline references the Piranha Brothers skit about Doug and Dinsdale Piranha, the notorious West End gangsters who would nail people’s head to the floor and even go so far as to utilize *gasp* sarcasm on their victims.
The image of Michael Palin and Terry Jones is from the sketch where the Vercotti Brothers, Luigi and Dino, are blackmailing Graham Chapman’s regiemental commander. (although I seem to remember Luigi Vercotti making a cameo appearance in the Piranha Brothers sketch as well).

I stand corrected… and humbled by your powers of recall! And I can see the sixth package got through yesterday, with Hungary allowed to have its oil, so we’ll see just how serious a threat that was.

The fruits of a misspent youth as a bona fide nerd/geek has printed some things like certain Monty Python sketches and other pop culture artifacts firmly in my mind, while other probably more important trivia fails all retention attempts. Ah well.