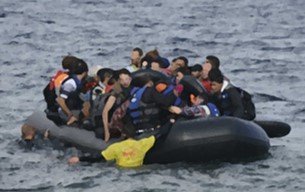 The headline of this post is, as best as I can tell from the information available, a succinct and yet comprehensive taxonomy of our ruling class.

This was brought home to me today by an article on DR’s website.

The EU’s Mission in the Mediterranean hasn’t stopped a single human smuggler
Tine Toft, DR.dk, May 31

The hook of the article is something the (ostensibly) right-of-center Venstre party chairman Jakob Ellemann Jensen said in a party leader debate on the referendum I discussed the other day (“Defensive voting“).

What he said was: “I’d like us to have the opportunity to participate when it comes to stopping human trafficking across the Mediterranean.”

DR’s “fact-checking” program Detekor looked into the amount of human trafficking that had thus far been stopped by the EU.

“In practice,” they conclude, “the mission has not stopped a single human trafficker.”

In fairness, they could have stopped there. In America they surely would have: they’d proved a conservative was wrong, isn’t that what fact-checking is all about? (Things are complicated in this case because most of the left shares Jensen’s support for a “Yes” vote and consequently they’re sort of all on the same general side here, even if he’s the only one who made this particular argument.)

But Detektor didn’t stop there, bless their hearts: having uncovered their treasure, they kept digging.

The mission in question is called IRINI.

So far, Irini has not been confronted with situations where it had to deal with migrants or human traffickers, writes a spokesperson.

The main purpose of the mission is not to combat human trafficking anyway.

The main purpose is to maintain an arms embargo against Libya through the use of ships, aircraft, and satellites.

But one of the mission ‘s secondary tasks is to train the Libyan coast guard, destroy the business model of human traffickers, and gather intelligence about them.

So far, the mission has not encountered a single human trafficker.

Irini has also not collected any information for use in responding to human traffickers. Nor have they ever trained the Libyan Coast Guard .

Libya has never said yes to the mission’s offer to train the coastguard. That’s why it hasn’t happened.

In addition, the EU has several civilian missions and projects aimed at combating human trafficking across the Mediterranean. Among other things, by training the Libyan authorities to handle their border controls.

But Denmark is already one of them.

To summarize: The mission in question only has the fight against human trafficking as a secondary goal, but it hasn’t done anything about it anyway, and part of the reason they haven’t is that Libya isn’t interested in Europe’s help. And although there are EU missions fighting human trafficking down south, Denmark’s already participating in them.

In other words, there’s obviously no need to abolish Denmark’s defense reservation in order for Denmark to join the fight against human trafficking.

Once again, Detektor could have left it at that. But, by gum, they persisted!

The reason for Irini ‘s limited contact with human traffickers is primarily that the mission is simply designed to avoid bumping directly into the smugglers, explains Anne Ingemann Johansen, Ph.D. in European security and employed at the University of Southern Denmark.

“It’s therefore not surprising that Irini has not apprehended a single human trafficker, because that is simply not the intention of the mission.”

Good point! If your mission is designed to avoid bumping into human traffickers, you’re probably not going to catch very many.

And here’s where things get fun.

One of the reasons why the current mission does not have the main purpose of combating human trafficking is largely due to a previous EU mission called Sophia.

Between 2015-2020, it was intended to apprehend human traffickers directly.

But the mission ended up working against the intent.

“In fact, I would highlight it as a fiasco in relation to the purpose,” says Anne Ingemman Johannesen, who has followed the mission.

This was no ordinary failure: it ended up working to the advantage of human traffickers! The Sophia mission would have actually have been more successful if its agents had done nothing at all.

The mission could not send traffickers or asylum seekers back when they arrested them.

The traffickers could therefore provide less secure inflatable boats, which were picked up by the EU mission outside Libyan waters, instead of having to make the trip all the way across the Mediterranean.

“That’s why they saved money: because they did not need such large, expensive boats. They could spend less money on petrol, food, and water, while they could charge the same ticket price,” explains Anne Ingemann Johannesen.

She adds that the Italian authorities in particular ended up getting really tired of having to take care of the asylum seekers and traffickers that the EU mission sailed to their shores.

Got that? Unlike Irini, Sophia was designed to find and catch human traffickers. But the rules of the game meant that once they caught the traffickers and their human cargo, they couldn’t be sent back to their country of origin. They had to be delivered to Europe.

Apply game theory—or any theory you like, really—to the following givens:

The goal of the human traffickers—the very service for which they charge their fees—was to get non-Europeans into Europe.

The goal of the Sophia mission was to catch human traffickers and bring them and their “clients” into Europe.

Thus, instead of avoiding the Europeans trying to catch them as they navigated their way across the Mediterranean, these Mediterranean coyotes were given every incentive to be caught.

Until recently, the Ministry of Foreign Affairs wrote on its website that the EU’s military missions have, among other things, “contributed to combating human trafficking across the Mediterranean.”

Following a request from Detektor, the website now states that the mission is about “enforcing the arms embargo against Libya”.

That’s how the article ends.

We can draw several important conclusions from Detektor’s findings.

First, obviously, “we have to subordinate our military to the EU so we can fight human trafficking” is not only a bad argument for the “Yes” side to make: it’s not true.

Secondly: the EU to which the “Yes” side would like us to subordinate our military is incompetent in its mission design and execution.

Thirdly, our government is happy to lie to us about what the EU is doing.—And when called out on such a lie, it won’t apologize or issue a public correction but simply stop promoting it.

Given those three observations, all of which appear indisputable, why in Freja’s name would any Dane want to subjugate our own armed forces to such idiocy and incompetence?

And yet that’s precisely what we’re going to do. This election is an event foretold.

How do I know?

Because if there was any doubt about this election, DR wouldn’t have run this piece.

The only light in the darkness here is that the state owned media is actually doing actual critical investigations of a politician’s blather.

The EU is so galactically incompetent at the goals it is officially professing to be aiming at that one is often reduced to save precious time by simply considering it as being entirely controlled by a cabal of actual enemies of those goals.

So, the EU states that it wants to reduce illegal human trafficking into Europe. Through a period of more than a decade it consistently demonstrates a singular and monumental inability to do *anything* to reduce such trafficking, and in fact is spending inordinate amounts of money actually *promoting* human trafficking.

One is therefore forced to consider that the powers that be WANT more illegal trafficking. Then things would make sense.

It is like having someone coming to your house, eating your food and spending all the time preaching to you about moral issues, and afterwards you always have to count your spoons and forks.

The problem is that the west doesn’t have the belly to do what needs to be done, which is to enforce borders in an absolutely unambiguous ways (ie, “I told you turn back. If you do not, I will discharge my firearm.”)

(And, obviously, ditto for America.)