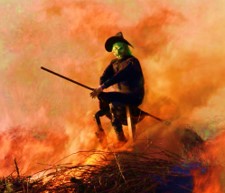 It’s the Danish (and Scandinavian) celebration of the summer solstice.

All across the land, tonight, Danes will gather around bonfires, enjoying picnic dinners with friends and neighbors, singing songs, and simply enjoying the long and beautiful evening. It’s an enchanting tradition.

In many cases, the bonfires will be topped with the effigy of a witch—anything from a cardboard cutout to a dummy stuffed with straw. The witches are a recent innovation, imported from Germany at some point in the early years of the 20th century.

I want to emphasize that this burning of witch effigies is not derived from a Skt. Hans tradition of burning actual witches. That was never a midsummer tradition. Ever. There was a period of witch hysteria in Denmark (peaking in the years 1617-1625) and witches were executed up until the 1690s, but there has never been any connection between Skt. Hans Aften and the burning of real human beings of any kind.

The effigies on tonight’s bonfires are not historical re-enactments. They aren’t a cultural echo. They’re not a collective act of nostalgia. It’s all pure fantasy.

It should also be kept in mind that these aren’t effigies of innocent women being accused of witchcraft: they’re effigies of actual witches. Monsters. The kind American kids dress up as on Halloween.

Witches are after all monsters, like werewolves and vampires and zombies—and dragons.

Chesterton felt very strongly about the existence of evil and the necessity of fighting it relentlessly. It was one of his central themes. People who’ve never heard of G.K. Chesterton have nevertheless been exposed to his moral instruction in this area through the pens of others. His direct influence on C.S. Lewis and J.R.R. Tolkien was so great that without it we probably wouldn’t have Narnia or Middle Earth—two of popular culture’s greatest monuments to the importance of slaying monsters.

Evil is real and every child knows it, even though many of them are coarsened into ignoring that knowledge as they harden into adulthood. The purpose of fairy tales, Chesterton was saying, is not to teach children that evil exists but that it can be conquered.

With all of the foregoing in mind, have a look at a “news overview” item published by Berlingske this morning:

There will be fewer witches on the Sankt Hans bonfires this year than before. Many have chosen to drop the tradition because of “ugly medieval references”.

This, according to Kristeligt Dagblad.

One place that has chosen to do something completely different this year is the Royal Theater, which instead offers invitations to a celebration of midsummer with a tribute to witches.

“The other is not a tradition we should be proud of,” says Annasophia Petri, who is an astrologer, magician, podcaster, and host of the event at Ofelia Plads in Copenhagen.

“Witches are some who dare to go against the flow, they are inventive, draw inspiration from nature, and dare to fight for what they believe in. We should pay tribute to that instead, “she tells Kristeligt Dagblad.

Instead, the role of the witch is to be discussed at the event.

Kristeligt Dagblad is behind a paywall, so I can’t access the full text of their article, but Berlingske seems to capture what I assume to be its essential points: Denmark is beginning to experience pushback against this tradition, it’s based on a supercilious view of history blended with some silly views of the present, and it’s being pushed by the usual sort of authoritative personality: an “astrologer/magician/podcaster.”

But before we begin tying these things together—Sankt Hans, witches, Chesterton, dragons, astrologer-magicians—I’d like to share a personal story.

Seven years ago today—that is, the Skt. Hans Aften of 2015—our family was for a variety of reasons unable to attend any of the local bonfires. Youngest, who was six years old at the time, was very disappointed, so as a compromise we agreed to build a mini-bonfire in our outdoor fireplace. On her own initiative she very excitedly constructed a witch from popsicle sticks, cardboard, construction paper, and yarn.

As I was preparing to place the witch atop the kindling, however, I noticed that Youngest had written “I am not a witch” across its chest.

“But Daddy,” Youngest exclaimed, “you can’t believe her: of course that’s what a witch would say!”

So the figure was placed upon the kindling and eventually we sang “Vi elsker vort land” (We love our country) as we lit the fire. We sat around it in quiet contemplation for a bit, and then it was Youngest’s bedtime and that was that.

I posted some pictures of our homegrown Sankt Hans bonfire on Facebook.

Almost immediately, an old American friend (whom I’ll call CW) commented that it was not an amusing tradition.

I replied that it was a lovely tradition and that if she were to experience just one Danish Skt. Hans Aften she would surely feel differently.

No, CW replied, there was nothing amusing or cozy about burning women alive.

I objected that no women had been or would be burned alive: just effigies of witches. Cardboard, straw, wood, whatever. No people.

CW informed me that her husband’s “seventh great aunt” had been burned for a witch back in the day, and suggested that my pictures were therefore somehow traumatizing to her—to say nothing of their obvious misogyny.

I expressed my condolences for her family’s loss, along with my hopes that they could overcome the trauma before another seven generations had passed, but I also reminded her that this was a perfectly lovely tradition and that good and kindly people all over Denmark—people of every political stripe, every age and sex, every color and creed—were gathered around similar bonfires that evening, joining their voices in song, and not one of them had any actual intention of burning anybody alive. (Not to my knowledge, anyway—but damn, that scenario could make for a mighty good murder mystery…)

That was apparently the wrong answer: CW dropped out of the Facebook post thread and began telling me in DMs that she never could have imagined I could be such a heartless bully. Didn’t I know she had been fighting cancer? She called me a lot of names.

I replied that I was aware of her struggles, and that of course she had my support, but that it hadn’t crossed my mind to connect her criticisms of my adopted country’s traditions to her medical problems.

She unloaded on me a bit more, with a viciousness I’d never have imagined her capable of (catty, yes; vicious, never), and before I could muster a reply I discovered she was no longer among my friends on Facebook.

I haven’t had any contact with her of any kind since then—and I’m fine with that.

CW and I had grown up within about 20 miles of each other in northeastern Massachusetts but first met at a university in Pittsburgh, where we were classmates in the same small performing arts program. We lived in the same dormitory our freshman year. We weren’t especially tight but we were in the same larger circle of friends and therefore saw each other more or less every day. For a period in our early twenties, after we’d both dropped out of the college where we’d first met, she dated one of my good friends while I was very seriously dating one of hers. We stayed intermittently in touch over the years and renewed our friendship in person in New York City not long before Herself and I moved to Denmark.

And she threw our long friendship away because I had participated in a cultural tradition she had never experienced but nevertheless found contemptible.

In the days and weeks and years that followed, whenever I related the story to Danes they would roll their eyes and smile.

Yes, I would say, but don’t worry: it’ll come here too.

And here it is.

I had never had any strong feelings about Skt. Hans Aften before the CW Facebook Freakout of 2015. I found (and still find) the holiday enchanting, as I’ve said, but it was just part of the background.

Having been forced to defend it, it became important to me.

It is now important enough to me that I feel compelled to defend it against its cultural detractors. Against anyone that would dismiss it as being fraught with the weight of “ugly medieval references.”

A symbolic witch is unambiguously wicked. There’s no need to put her on trial: her guilt is established as soon as we say, “this is a witch.” That is, a symbol of a witch is a representation of an actual witch: a horrible creature that would just as soon turn you into a frog as say hello, a treacherous and conniving creature, frequently a cannibal with a sweet tooth for children.

Burning a witch is no more offensive than slaying a dragon, driving a stake through the heart of a vampire, or double-tapping a zombie. It’s what a witch deserves. It’s certainly tragic and awful that thousands of innocents were burned or hanged or drowned or stoned as witches, but the error wasn’t one of witches being handled inappropriately: it was one of witches being incorrectly identified.

The problem here is that a growing swathe of the population is deeply confused about monsters. The astrologer and magician Annasophia Petri, for example, who’s abandoned the burning of a symbolic witch in favor of paying tribute to them, has run so far afield of the point that she’s no longer even in the same stadium.

There are no good witches.

Nor are there any good demons, dragons, vampires, werewolves, or zombies. Not in the essential world of the fairy tale, the myth, the legend. There is moral ambiguity galore in the material world we inhabit: the vital thing about monsters, the very point of them, is that they’re so unambiguously evil. There’s no gray area.

Of course popular culture abounds with good witches, friendly dragons, and recalcitrant vampires: it’s pleasant to imagine domesticated monsters. It’s easier to live with the idea that there are monsters out there if we can convince ourselves that maybe they’re not all bad.

Easier, but not helpful.

Paying tribute to monsters is the very last thing we should be doing. Softening up their reputations is a fool’s errand. Monsters serve a vital function, one that Chesterton spelled out for us with perfect clarity: they teach us to acknowledge that there is evil in the world and we have to fight it—and that not only can we fight them, but we can defeat them.

Pretending there aren’t any monsters, or that the existence of wacky spiritualists practicing “white witchcraft” somehow proves that witchcraft itself is value neutral badly distorts our moral universe. We need our monsters to be truly monstrous so we can teach our children that we can defeat them.

Because the critics do have a point: if even a symbolic witch could just as easily be good as evil, then defeating a witch becomes an ethical problem: nobody wishes any ill on a good witch.

How can we teach our kids that dragons can be slain if not all dragons should be slain?

As Homer Simpson might have said: “I like my beer cold, my TV loud, and my monsters evil.”

…and my Skt. Hans bonfire with a witch on top.