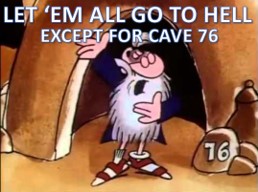 The article itself isn’t especially interesting—the EU is implementing what amounts to gender quotas (but don’t you ever call them that!) for the boards of European companies with at least 250 employees.  Pretty stupid stuff and therefore also as surprising as it is interesting. And I already said it wasn’t interesting.

The reason you can’t call them gender quotas is that they’re not saying big companies have to have a certain percentage of women on their boards: they’re saying that “40 percent of board positions must be represented by the underrepresented gender, which is often women.”

The 40 percent figure struck me as weird. Has the European Parliament given up on parity?

There’s your answer: it’s easily within reach of the European Parliament itself (total employees: roughly 8000, according to the parliament itself, and therefore plainly subject to the law they’re passing). In looking that up, by the way, I noticed that 55% of the parliamentary staffers are female. Also not surprising—or interesting.

The very interesting thing here, in my view, is to speak of “the underrepresented gender” in a world where more and more western authorities and opinion leaders are beginning to move away from the traditional (which is to say actual) binary with respect to sex and gender.

According to the European Parliament itself:

After being blocked in the Council for a decade, EP and EU countries’ negotiators finally agreed on a bill to increase the presence of women on corporate boards.

The provisional agreement reached on Tuesday night on the draft legislation aims to ensure gender parity on boards of publicly listed companies in the EU.

At least 40% of non-executive directors should be women

The so-called “Women on Boards” Directive aims to introduce transparent recruitment procedures in companies, so that at least 40% of non-executive director posts or 33% of all director posts are occupied by the under-represented sex. Thanks to Parliament, companies must comply with this target by 30 June 2026, compared to the Council’s proposal of 31 December 2027. In cases where candidates are equally qualified for a post, priority should go to the candidate of the under-represented sex.

(“Women on Boards” is surely the name of a feminist theatre company somewhere, or the title of a pornographic surfing video, but never mind that.)

First of all, the EP is using sex and gender interchangeably. The legislation “aims to ensure gender parity,” but the article also talks about “the under-represented sex.”

If there are more than two genders, how can all of them have at least 40% representation?  Are we gonna throw away math along with biology? And if sex and gender are different things, why is the EP mixing them up?

If you think none of that matters, consider this May 10 story from Australia’s The Age: “Christian policeman faces disciplinary action after posting ‘there are 2’ genders.”

The 62-year-old Staffieri was interviewed by officers from Professional Standards Command on April 26 over a post he made to senior project officer Bonnie Loft, who works with Gender Equality and Inclusion Command.

“So you are doing tertiary education studying genders. I’ll make it easy for you to pass….there are 2,” Staffieri said in a post from November last year.

So it’s an actionable offense in Australia to say there are two genders, at least in the Victoria Police, while the EU is about to issue legislation built entirely around the premise of there being only two genders.

What would newly seated U.S. Supreme Court justice Ketanji Brown Jackson make of all this? In case you forgot, she’s the one who asserted during her confirmation hearing that she could not define what a woman is—famously (and unhelpfully) adding, “I’m not a biologist.”

From her perspective, is the policeman in Australia being persecuted?  Or has the EU gone all-in on hate?

The GLOB is going to have to get its messaging straight.

(Or should that be, “the GLOB is going to have get is messaging cis?” Who can keep up?)

If this belief in an indeterminate number of genders is real, if it’s sincere, then we should see that in the kind of legislation being pushed by the EU.  We do not.

If it’s all just an insincere pose, however, then we need to begin prosecuting people like those threatening the career of a policeman who stated a commonplace truth.

But I’m not conducting a legal analysis: this is high-level stuff. Almost philosophical.  We’re looking at three divergent schools of thought, each of them perpetuated by actors well to the left of the western political center.

The first is that there are two genders, men and women, and that’s it—and they are entirely alike and interchangeable in every possible way, so any circumstance in which one gender outnumbers the other is necessarily an obvious injustice. This is the school of thought driving the EU legislation described above.  The first part of it used to be considered the most banal of truths—and apparently still is, but only when we’re talking about the inequitable distribution of the genders in fields where women are seeking more of what they believe men to have been unfairly hoarding (which never seems to be things like mineworking, quarry labor, or construction).

The second is that there are a whole multitude of genders out there, and that it’s therefore hateful to claim there are only two.  That seems to be the position of the Victoria Police, who probably wouldn’t call an employee in for questioning if he or she had said “the number of fingers people have on each of their two hands is five,” even though not everybody has two hands sporting five fingers each. Adherents of this school don’t agree on how many genders there are, call them different things, and can’t even offer meaningful definitions of many of the genders they can name: all they can tell you is that you must not claim there are only two.

The third is best expressed by a paraphrase of America’s newest Supreme Court associate justice: “Woman?  What the fuck’s a woman?”

The first two are mutually exclusive: the third is a slippery and cowardly way of attempting to navigate between them.

Focusing on the first two schools, then, since cowards are of no concern, how can we possibly reconcile the idea that there are more than two genders with the idea that the proportion of genders in this or that field must be measured by calculating the ratio of women to men?

There’s an online resource from Women’s Health magazine called “A Comprehensive Gender Identity List, As Defined By Experts.” It enumerates 16 genders (including gendervoid, omnigender, pangender, and two-spirit). Medical News Today also has a list of 16, but includes some not included in the Women’s Health list. Healthline.com has a list of “68 terms that describe gender identity and expression.” Something called the Gender Fandom Wiki offers too many for me to count, and helpfully provides a flag for each of them.

So with all those fabulous genders out there, and with the European Parliament legislating as though there were only two, does that mean only two genders are recognized in the EU?

If so, there’s a problem: Austria, Belgium, Denmark, Germany, Iceland, and the Netherlands all “legally recognize non-binary or third-gender classifications.” If big publicly-traded companies in those EU nations are going to have to create “gender parity” on their boards, what does that translate into in terms of genderqueer, gendervoid, and two-spirit representation, for example?

I ask seriously because this is the law, and the law is serious business (and an ass; those things are not mutually exclusive). Male-female parity is something we all understand. But when there isn’t universal and unanimous agreement on what the other genders are called, much less what they actually are, how can we proceed with the important business of suing one another?

This stuff is silly, and I hope that’s obvious, but it’s not inconsequential.

The maniacs embracing all this nonsense are few in number and I don’t think they have any idea how many people are snickering at them behind their backs. Looking over the taxonomy of genders on the Gender Fandom Wiki, for example, one almost feels bad for the curators, who clearly have to post the obviously satirical entries (“Fractalgender”) because so many of the apparently serious entries (“Aporagender”) are indistinguishable from satire.

Aporagender’ (from Greek apo, apor “separate” + “gender”) is a nonbinary gender identity and umbrella term for “a gender separate from male, female, and anything in between (unlike Androgyne) while still having a very strong and specific gendered feeling” (that is, not an absence of gender or agender).

It’s a gender that’s not male or female or anything between, but with a very strong and specific feeling of gender.

So strong and specific that it can only be defined by the things it is not.

And it has Greek roots, so don’t you dare doubt its scienceishness.

I won’t belabor the point any more than I already have.

At some point, probably sooner rather than later, all the various leftwing insanities are going to come crashing into each other.

The pyrotechnics are going be epic.

Obviously, the EU and the various member states who legally recognize more than two genders are going to have to sue each other into oblivion over all this. 40% representation for every gender on the map or bust!

Yes, it will be epic as the competing insanities claw each other to shreds over the last remaining bits of space on the sinking ship.

Only trouble is that we are also on board

Yeah, that is a problem…